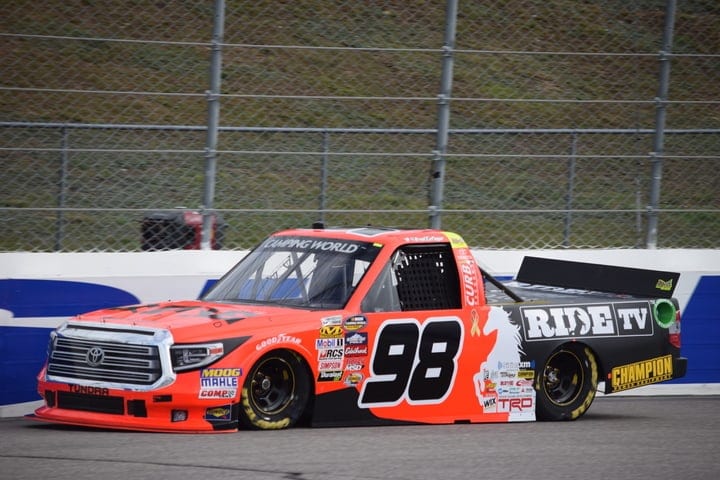 Grant Enfinger is off and running right off the bat for ThorSport Racing. The No. 98 team set the pace during the opening practice session for the NASCAR Camping World Truck Series at Daytona International Speedway, clocking in a time of 46.867 seconds.

ThorSport Racing switched manufacturers over the off-season, partnering with Ford to become the main blue oval team in the division after Brad Keselowski Racing closed its doors.

At the start of practice, Brett Moffitt spun out while getting up to speed. His No. 16 truck went around entering the backstretch, but managed to keep it clean.

FDNY Racing, which only runs a handful of races each year, was able to sneak into the fourth position by the time practice ended. Bryan Dauzat led the No. 28 team into the fourth position, with John Hunter Nemechek in fifth. Nemechek led a majority of the session, returning to the Truck Series before he begins competing part-time for Chip Ganassi Racing in the XFINITY Series.

Cody Coughlin, who moves over to GMS Racing’s No. 2 truck in 2018, clocked in a time good enough for sixth in practice, with rookie teammate Dalton Sargeant behind him in seventh.

There will be two more Truck Series practices on Thursday prior to Friday evening’s NextEra Energy Resources 250.