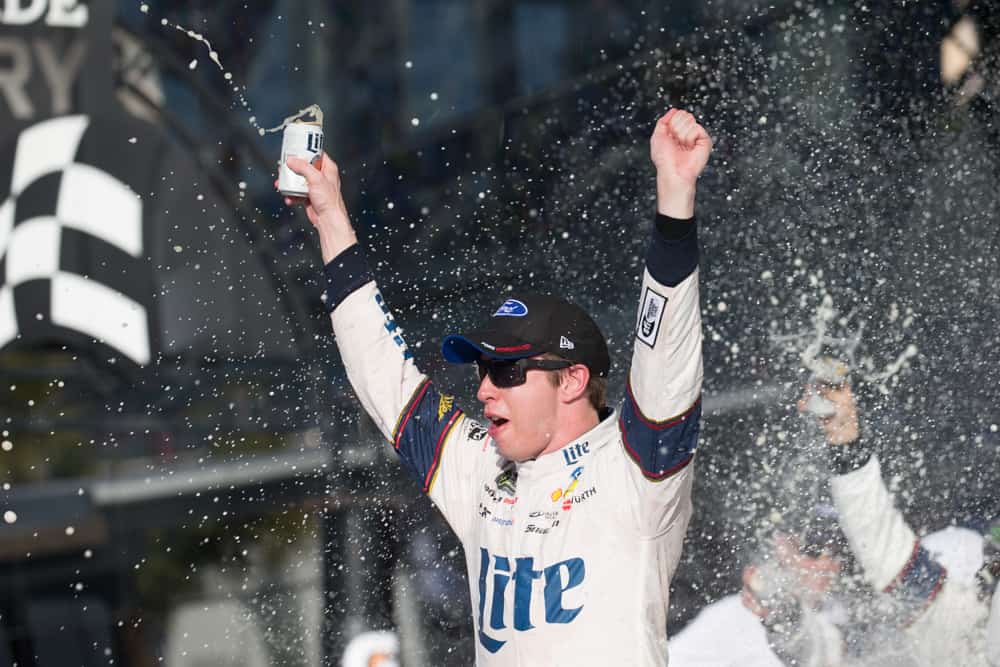 Brad Keselowski is ready for the start of the season - are you?

Itʻs time.  Time to start imagining the prospect of winterʻs chill receding in the rear-view mirror.  Time to enjoy the jet dryer of time blowing away old memories to start the season anew.  Time to allow a bit of childish joy to creep into your life if youʻre a motorsport fan as all three of NASCARʻs major touring series take to the track this weekend at Daytona.  Itʻs time to drop the green flag.

The Rolex 24 may be the start to the racing season but itʻs this weekend that really gets things going.  That also means that itʻs time to fire up the media machine to offer all the in-depth analysis that should provide insight and perspective for Americaʻs most popular racing series.  Of course, you wonʻt find that in this column – thatʻs what the rest of the Frontstretch writers are for.  (Insert winking emoji here).

As such, letʻs get happy.

Happiness Is…Giddiness.  If youʻre reading this column, itʻs suspected that you might be some kind of motorsports fan.  Itʻs either that or you have a morbid sense of disdain for NASCAR coupled with an inordinate amount of free time and feel the need to torture yourself.  To the former: Great.  To the latter: Whatever works for you.

Letʻs realize however that thereʻs nothing like the optimism, enthusiasm, and joy of the first races of the season.  Thereʻs something to be said for the embrace of those first laps.  Itʻs been a weird winter, one of the more chilling in recent memory for many in the country and sports serves as a welcome distraction while also being a community building entity.  At the very least, it is a welcomed programming sight for everyone that is not frolicking in the sun and dancing along the sand.

Are there problems with the sport?  Yup, even the most ardent of fans will note that.  But Daytona isnʻt about rehashing all the material that problematizes the sport; itʻs a time to celebrate, to enjoy, to have what some people call ʻcritical pleasureʻ – meaning that we need to allow ourselves to like something even with its warts.  The Trucks, XFINTIY, and Cup are all in business this weekend and itʻs time to settle in for a little couch potato vegetation and give in to the silliness that is the alternate reality known as NASCAR.  The weather forecast looks perfect.  Weʻll all just have to turn a bit of a deaf ear to whoʻs reporting the action and allow for a good time otherwise.  Welcome back.

Happiness Is…Celebrities.  Thatʻs right, Charlize Theron and Peyton Manning will be featured prominently during the Daytona 500.  From one perspective, it is easy to poo-poo this move.  It looks like the typical behavior of NASCAR execs to bring who-the-hell-cares people to the racing world.  Itʻs not like anyone really sees either Theron or Manning as a NASCAR lover.  Oh, you mean that you missed Theron declaring her love for NASCAR during her press junkets for Atomic Blonde?  Or maybe you forgot Manning doing adverts where heʻs cracking wryly while at the track.

Oh, those things didnʻt happen?  Hmm.  Really, itʻs no big deal.  While often times the inclusion of peculiar star personalities is a reason for consternation – OK, most of the time – this time there seems reason to be pleased at who will be present and showcasing the sport.  That neither one screams, “NASCAR!” doesnʻt mean that they arenʻt worth having around.  For a sport where the attendance has been a concern, both Theron and Manning work as tenable actors to bring a little bit of added attention.  Thatʻs not a bad thing.  Eyeballs = sponsor commitments, and the sport is run on corporate backing.  No reason for harsh criticism of the two here, instead, welcome, because maybe they actually will talk about how much they liked their NASCAR experience on their next junkets or interviews.

Happiness Is…Rumors.  In a rumor that seemingly came out of nowhere but should come as no surprise, there is speculation that parts, or the whole, of NASCAR could be for sale.  Thatʻs right, according to the Sports Business Journal there is some inquiries regarding the sale of the sport.  Our Tom Bowles made mention of it in his column, and analyzed some of the meat of the matter.  While, as Bowles asserts, thereʻs little chance of its sale tomorrow, the potentiality of a sale is all it takes to make things seem like something is up.

And the fans rejoice.

Take F1.  For years fans clamored about how tired they were of Bernie Ecclestone running the series and how under his direction the sport had lost their way.  Ecclestone was an amazing businessman and kept all interested parties mostly content by making sure there was something for their coffers.  But the sport needed to embrace new methods for presenting itself in the digital age and Ecclestone lacked an imagination there.  Liberty Media purchased F1 and already there are signs of an openness and willingness to engage and listen to the fans that had previously not been seen.

Perhaps the same could be said for NASCAR should an organization like Comcast feel encouraged to buy it.  Comcast has every reason to listen to the voices that bring them profits, the fans, rather than listen to track promoters, track ownership, team ownership, or who the hell knows who else whispers in Brian Z. Franceʻs ear at night.  The infusion of new insight and leadership may be just what the sport needs.  Anyone who has read Faulkner can recognize that the third generation, as seen in the Snopes family, represents the beginning of a decline.  Maybe thereʻs reasons to be more than happy about these rumors.

“who the hell knows who else whispers in Brian Z. Franceʻs ear at night”
I believe his name is Jack.
Jack Daniels to be exact.

How about Jim Beam? It yells in my ear!