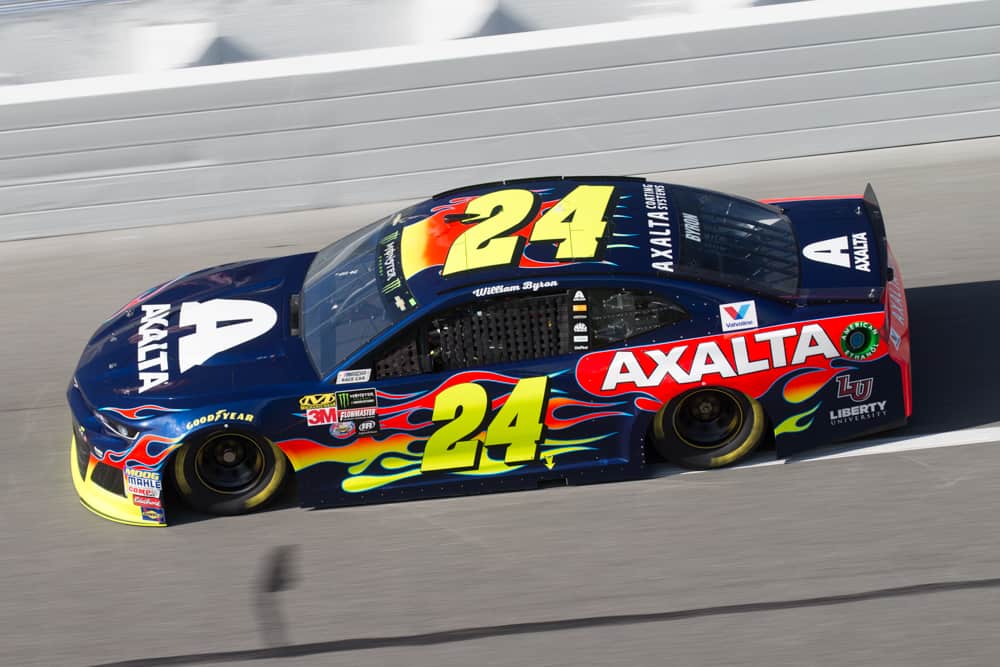 Whew. What an off-season, right?

If you’ve been following the NASCAR scene, particularly its top three national series, since mid-November, it’s probably been tough to get a handle for all the changes coming to the Monster Energy NASCAR Cup, XFINITY and Camping World Truck series in 2018. That can be equal parts exhilarating and tiring; yeah, you really have to pay attention if you don’t want to be totally lost when the cars and trucks hit the track at Daytona International Speedway, but at least it shakes up the status quo, something some were practically on their hands and knees begging for a few years ago when there wasn’t as much turnover in the Cup Series especially.

Well, now look at us. The old guard is dropping like flies, retiring left and right, while new blood flows in to take their place. It’s happening in the lower series, too; after all, teams like JR Motorsports need new drivers when someone like William Byron leaps to Cup. And if they pick that driver from the Truck Series… eh, you get the picture.

So here you go: a cheat sheet for this weekend. This is what’s changed among the top three series, specifically with regards to who’s in the seat at Daytona (yes, there are other drivers competing throughout the season, but let’s take baby steps). Anyone below is with their respective team and/or car/truck number after not running it at all in 2017. That means you won’t see Darrell Wallace Jr., who’s new to Richard Petty Motorsports on a full-time basis but still ran a few races for the team’s No. 43 in 2017. Same with Christopher Bell and Joe Gibbs Racing’s XFINITY No. 20 car. And so on.

This is the new, new stuff. And boy, do we have a lot to catch up on.

No. 7, Danica Patrick: You’re probably already familiar with the situation here. The Daytona 500 marks Patrick’s final run in NASCAR (at least, final planned race), driving for Premium Motorsports and with longtime sponsor GoDaddy. The team will reportedly revert back to its usual No. 15 number following the race.

No. 9, Chase Elliott: New number, but otherwise, little has changed for Chase Elliott at Hendrick Motorsports.

No. 10, Aric Almirola: One of the worst-kept secrets over the final stretch of the 2017 season was Almirola’s move to Stewart-Haas Racing, replacing Danica Patrick.

No. 12, Ryan Blaney: Team Penske beefs back up to three cars thanks to its addition of Blaney, who comes over from Wood Brothers Racing.

No. 20, Erik Jones: Matt Kenseth’s tenure in Cup comes to an end as Jones takes over Gibbs’ long-running No. 20. As a result, Furniture Row Racing’s No. 77 team has shut down.

No. 21, Paul Menard: With Ryan Blaney’s move to Team Penske, the Wood Brothers had an open seat, and Paul Menard is their guy after multiple seasons at Richard Childress Racing.

No. 24, William Byron: Come the Daytona 500, Byron will be making his series debut, much like Daniel Suarez did in 2017. He’s essentially sliding into Kasey Kahne’s vacated No. 5, but with a different number — Hendrick’s famed No. 24.

No. 51, Justin Marks: The No. 51 for the Daytona 500 is a joint venture between Rick Ware Racing and Premium Motorsports, and Marks is not full-time.

No. 62, Brendan Gaughan: Remember Beard Motorsports’ No. 75 that ran at the superspeedways with Gaughan in 2017? It got a new number.

No. 72, Corey LaJoie: TriStar Motorsports’ ride will be split between LaJoie and Cole Whitt, the latter last year’s full-time driver, with LaJoie running the bulk of the races, including Daytona.

No. 88, Alex Bowman: The most high-profile change from 2017 in the Cup Series; little needs to be said, really.

No. 92, David Gilliland: New-ish team, at least new to the Cup Series. This is Ricky Benton Racing, which has competed in the Truck Series the past few seasons on a part-time basis. It has plans to potentially run a few more races in 2018.

No. 95, Kasey Kahne: After multiple seasons with Hendrick Motorsports — the latter part of which ended up somewhat disappointing — Kahne moves to the single-car Leavine Family Racing, replacing Michael McDowell.

No. 00, Jeffrey Earnhardt: StarCom Racing, which debuted toward the tail end of 2017 with Derrike Cope, scores a charter and moves to a full-time run in 2018 with Earnhardt, who moves over after the No. 33 team shuttered in the off-season. Cope remains as the team manager.

No. 2, Matt Tifft: After a season running full-time for Joe Gibbs Racing’s No. 19 in the XFINITY Series, Tifft jumps to Richard Childress Racing to run its No. 2, normally shared by a combination of Cup regulars and part-time XFINITY contributors.

No. 9, Tyler Reddick: Reddick finally gets his shot in a full-time ride in the series, taking over William Byron’s vacated ride at JR Motorsports. He ran half of the schedule in 2017 for Chip Ganassi Racing, scoring a win at Kentucky Speedway.

No. 19, Brandon Jones: Essentially, Matt Tifft and Brandon Jones swap teams, Jones moving to the No. 19 for Joe Gibbs Racing for 2018.

No. 24, Kaz Grala: The No. 24 becomes JGL Racing’s main focus for 2018, with Grala its full-time driver; he comes over from GMS Racing’s No. 33 in the Truck Series, making his series debut at Daytona.

No. 35, Joey Gase: Go Green Racing re-enters the series with Gase, who comes over from Jimmy Means’ No. 52. The arrangement will reportedly include races for Go FAS Racing in the Cup Series this year as well.

No. 36, Alex Labbe: Labbe, who’s been a presence in NASCAR’s Pinty’s Series in Canada the past few years, makes his first full-time foray south of the border with this Mario Gosselin-owned team.

No. 39, JJ Yeley: TriStar Motorsports has not brought a team to Daytona in the XFINITY Series, and Yeley, who drove the full season for its No. 14 last year, moves to Ryan Sieg Racing to drive its No. 39 on the superspeedway.

No. 45, Josh Bilicki: Bilicki scores his first shot at a full season in NASCAR via the newly formed JP Motorsports.

No. 52, David Starr: Starr maintains his journeyman status by joining yet another new team, this time Means Motorsports, for 2018, after driving the No. 99 in the series in 2017.

No. 55, Stephen Leicht: The other full-time car for new team JP Motorsports (and the first one to be announced) will be driven by Leicht, who started out 2017 with Obaika Racing.

No. 60, Austin Cindric: Cindric, Chase Briscoe and Ty Majeski will share Roush Fenway Racing’s second full-time car in the series, with Cindric piloting the car at Daytona. He’ll also drive for Team Penske in 2018, adding up to a full season.

No. 76, Spencer Boyd: For the first time, Boyd has a full-time ride in a NASCAR national series, driving a car for Bobby Dotter (taking over the points from its No. 07).

No. 78, Ryan Ellis: Now partially retired as a racer, Matt DiBenedetto‘s PR guy opts to run just his second race since the beginning of 2017 for BJ McLeod‘s No. 78. The car’s full schedule has not been announced.

No. 99, Ray Black Jr.: Black had originally been rumored for a full-time Cup ride with Rick Ware Racing, but for now, he’s running Daytona with BJ McLeod Motorsports.

No. 1, BJ McLeod: Takes over the No. 1 for TJL Motorsports, owned by Tracy Lowe, a former co-owner of Make Motorsports. The team has not announced its full driver lineup for 2018.

No. 2, Cody Coughlin: Coughlin shifts to GMS Racing for 2018 after running the full 2017 schedule with ThorSport Racing.

No. 3, Jordan Anderson: Anderson’s fully under the banner of his own team for the full schedule of 2018, and with a new number and look.

No. 4, David Gilliland: Don’t get comfortable with this one; the veteran Gilliland is just one of a handful of drivers keeping the seat warm for his son Todd, who will take over the No. 4 in a full-time capacity once he turns 18 on May 15.

No. 7, Korbin Forrister: All Out Motorsports, the team for which Forrister will be competing at Daytona, is a brand new team for the 2018 season. Its owners? Ken and Karen Forrister, Korbin’s parents. The team plans a limited schedule for its first year, with its second attempt currently coming at Dover International Speedway.

No. 13, Myatt Snider: Snider popped up multiple times in 2017 in Kyle Busch Motorsports’ No. 51, and in 2018, he gets the nod full-time with Thorsport Racing, replacing Cody Coughlin, who moves to GMS Racing.

No. 15, Robby Lyons: Premium Motorsports’ first of two trucks in the series (the other: the No. 49 for Wendell Chavous, much like last year) goes to Lyons, a 29-year-old racer from Florida who ran two races for the team’s No. 49 at the end of 2018. Lyons is currently signed for the first four races of the season, with more possible.

No. 16, Brett Moffitt: The closure of Red Horse Racing bit a number of people, including Moffitt, who had been its full-time driver in the No. 7 in 2017 until it shuttered. Moffitt gets a second chance in 2018 with Hattori Racing Enterprises, taking over for Ryan Truex.

No. 20, Scott Lagasse Jr.: At the moment, Lagasse’s deal is for one race with Young’s Motorsports’ second team, the No. 20 (he drove the No. 02 once last year). Nothing particularly new, as he tends to run every year at Daytona in some capacity.

No. 25, Dalton Sargeant: After finishing runner-up in the standings for the 2017 ARCA Racing Series season, Sargeant gets his first full-time ride in a NASCAR national series, driving GMS Racing’s No. 25, which takes its 2018 points from last year’s GMS-run No. 33.

No. 33, Josh Reaume: One of the new teams entering NASCAR’s national series in 2018 is Reaume Brothers Racing, partially owned by driver Josh Reaume, a multi-year veteran of the XFINITY and Truck series at this point.

No. 51, Spencer Davis: Kyle Busch Motorsports’ No. 51 often features a conglomeration of drivers young and old, and 2018 is no different, with Davis getting the nod for multiple races, including Daytona. He ran seven races in 2017 in ARCA for Venturini Motorsports, scoring four top 10s.

No. 54, Bo LeMastus: Another new team, which rose from the ashes of Red Horse Racing. This is a venture between David Gilliland Racing and Crosley Racing; LeMastus owns the latter.

No. 74, Cody Ware: Mike Harmon Racing hasn’t announced its plans for 2018 in the series (it is, however, coming back to the XFINITY Series in a full-time capacity), but Ware will run for the team at Daytona.

No. 83, Scott Stenzel: Stenzel returns from a brief respite from the series (he last ran in the series in 2014), driving the No. 83 in a joint entry between Copp Motorsports and E2 Northeast Motorsports. Its plans past Daytona have not been announced.