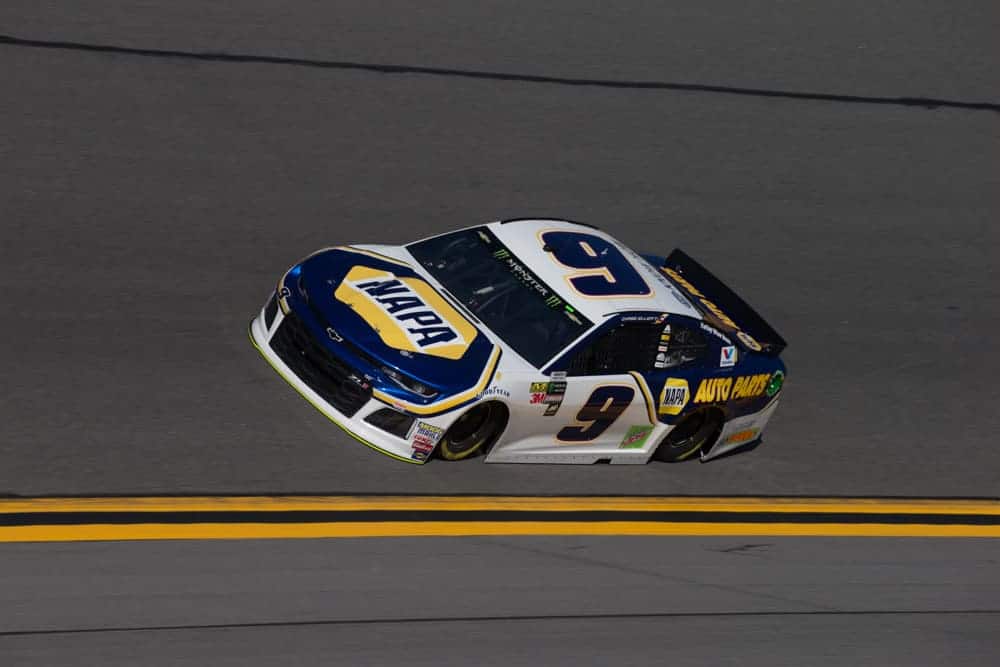 “We did this last year. We got the big one to go on Sunday,” Elliott said to FS1.

Paul Menard led a charge to shuffle up the field and Jones fell back into the mid-pack in the high line. Elliott stuck his nose in between Jones and Martin Truex Jr. on lap 12, causing Jones to spin out. Kyle Larson and Matt DiBenedetto were collected in the aftermath — the second car of Larson’s to wreck during 2018 Speedweeks.

Elliott and Jones both continued on in the race.

Kevin Harvick grabbed the top spot from Hamlin on the restart with Menard pushing, but Hamlin recovered to take the lead again a few laps later.

Just before halfway in the second Duel, Elliott got a run on Hamlin and completed the pass with no help.

The laps ticked down to two laps to go under green flag conditions, as Elliott continued to lead Hamlin and the Fords of Harvick, Clint Bowyer and Menard.

Harvick used the push from his manufacture teammates to root out Hamlin and take second place.

“I knew it was going to take two moves there, I knew I would have to get by Denny before I had a chance to win the race,” Harvick told FS1.

Menard pulled up high to try to take a shot at the win, but had no help and drifted back, weakening the Ford line.

Elliott held off a hard-charging Harvick and Bowyer on the last lap to win the the second Duel.

“I didn’t really know what to do,” Elliott said. “This new package is a little different and the way these cars draft I think is a little strange compared to what we’ve seen in the past.”

Jones recovered from his earlier spin to beat out Bowyer to the finish line for third place. Busch rounded out the top-five.

Elliott’s win nets him a fourth-place Daytona 500 start because Hamlin, who ended the race in ninth, will start the Daytona 500 on Sunday in second place due to his qualifying time.

Let’s just give Chase the ME Cup right now. The #9 is the anointed one. Can’t wait to see the sit down interview by DW and Billy Elliott I thought the Waltrips were not coming back to Fox Sports per all the trolls last year.