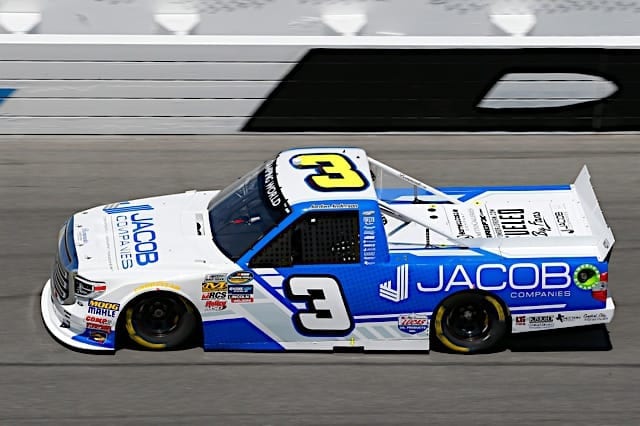 Anderson, 26, began the NextEra Energy Resources 250 in 28th position. After lagging back for the opening two stages, the South Carolina native decided it was go time over the final 60 circuits.

Slowly moving up through the pack, Anderson found himself in the top group of trucks during the final 20-lap stretch. Crossing the white flag, Anderson was running fifth. That’s when Ben Rhodes jumped out of line in sixth, shuffling the No. 3 truck back.

Coming to the checkers, that left Anderson losing control. The last few seconds saw him sliding across the grass into a ninth-place, career-best effort.

“I can’t believe it at Daytona,” Anderson said post-race, celebrating the ninth-place result as if it were a victory. “This place is so special for so many reasons. I first came here in 2015, trying to make a career in this sport. I have worked so hard the past several years, and I’m absolutely blessed. I’ve got so many awesome people around me that sacrificed a lot to make this team a reality.

“We knew coming into tonight we needed to survive the first two segments. So we just laid back and actually lost the draft there in the second segment. We knew we just needed to survive and be there for the final segment. I had a couple of close calls, and I think we restarted 13th or 14th with like 20 to go. That’s when I said, ‘Let’s go for it.’

“This makes it all worth it. I love this sport, and I love the opportunity. This one is for the underdogs tonight.”

On Jan. 31, Anderson announced that he was going racing full-time as a driver-owner under the Jordan Anderson Racing banner. However, earlier in the month, he wasn’t even sure that racing was in his immediate future.

“In the second week of January, I had $190 in my bank account and didn’t know if this was going to happen,” he explained. “A couple of people stepped up here, gave us motors and gave us trucks. Me and my family gave everything we had to be here to make this happen. To see all the hard work pay off… and it’s so hard to get points… this will hopefully carry us for the next several races.”

The team has four employees and four trucks in its fleet while being based out of the Niece Motorsports shop in Statesville, N.C. Heading to Atlanta Motor Speedway, the track where Anderson nearly saw his racing dreams crushed one year ago, he sits ninth in the points, 31 markers behind points leader Johnny Sauter.

“If we didn’t have the fans to get that truck going after that Atlanta crash last year, none of this would be here,” he said. “But we got a top-10 tonight.”

great job for Jordan who has worked so hard for so many years with little money.
Another great Legends driver moves forward