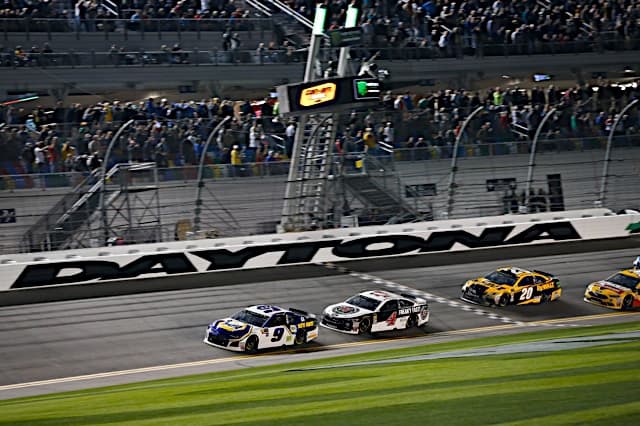 Who’s in the headline –   The Can-Am Duels at Daytona didn’t have the frenetic activity and tension as the laps wound down but there was still plenty of drama as the races unfolded. When it was all said and done, Ryan Blaney and Chase Elliott took the checkered flags first in the Duels and they will make up the second row for the 60th running of the Daytona 500.

What happened – Race number one unfolded very quickly as Jimmie Johnson cut down a tire early in the race, lost control of the car and collected Aric Almirola and Daniel Suarez. The next two caution flags of the event had a very similar circumstance. In both cases Ricky Stenhouse Jr. swung out from behind a car and took the air away from the rear enough to cause the car in front of him to spin out. Unfortunately for William Byron and David Gilliland, it resulted in wrecked racecars. The fourth and final caution of the night unfurled as Jamie McMurray made a run to the outside of Brad Keselowski on the back straight. Keselowski moved up and pinched McMurray into the wall, ultimately bouncing off of the outside wall killed Keselowski’s car and ended his night. Joey Logano was the dominant car in the race, but Blaney made a move to the low side and had help from Bubba Wallace to clear Logano.

In Duel No. 2 it was far less eventful, from the caution standpoint. Only one yellow rag waved over the event. Elliott made a move similar to Stenhouse while trying to pass Erik Jones on the back straight. The result was Jones spinning, Matt DiBenedetto and Kyle Larson wrecking with enough damage to fall out of the race. Elliott pitted and changed tires, while no one else did. The alterations made to the car during the stop improved the handling and eventually led to him passing Denny Hamlin to take the lead and stay there for the final 34 laps.

Fans have asked for years for the plate cars to be harder to drive. It should break up the packs and result in fewer large wrecks. The consequence that many didn’t realize was that the break up of the packs means more single file racing and far fewer passes for the lead. The races will still require assistance for a car to make a move, but strategy is going to come into play and it will be different from pack racing or tandem racing.

Fans are still talking about 40 cars for the 500 with no teams going home. The charter system seems to have had the unintended consequence of stifling the influx of new teams to the sport. The business model is going to need to change again or the number of teams attempting to make races will eventually be 36 with the possibility of even fewer making attempts for some races.

Speaking of fewer teams attempting to make races. BK Racing filed for Chapter 11 bankruptcy protection on Thursday. Gray Gaulding still competed in the Duel and is expected to run in the 500. What happens next will be anyone’s guess. The filing prevents further court action in the process of debtor Union Bank & Trust attempting to obtain the assets of the team, including their charter that is utilized by the No. 23 team. NASCAR has yet to pull a charter from a team but this tenuous situation is going to put that to the test in the near future.

There wasn’t near as much discussion about it on Thursday night, but pit stops are still going to be different for the first few races of the season. The spec pit gun is not only slower by definition, it is also going to result in mistakes by crew members whose hand speed is much faster than the new guns can handle. By the time the series gets to Charlotte Motor Speedway in May, the pit stop speeds will be tuned about as finely as they can be. Until then, it will not be shocking to see pit mistakes impact large numbers of cars during the 500 this weekend.

Keselowski won the Clash last weekend and had a fast car again on Thursday night. Unfortunately for Keselowski, a mistimed move up the track put his right rear quarter panel into the nose of McMurray and ended his race prematurely. Keselowski knows that the ultimate prize is Sunday’s race but tearing up his number one bullet has to put some doubt into his mind about what he will have under him on Sunday.

Larson can’t seem to catch a break at Daytona. He’s been into the catchfence and destroyed some racecars. It seems like, no matter where he is on the racetrack, he ends up being caught up in other people’s problems almost every time he races there. Thursday was no exception as Jones spun in front of him and it ended up causing contact with DiBenedetto that killed his race. Starting at the back of the 500 can’t make Larson feel any more confident about how his race will play out Sunday.

Wallace made his full-time debut in the iconic No. 43 car this week. It couldn’t have gone much better in the Duels as Wallace pushed his buddy Blaney to the lead and nearly finished second in the race. Wallace supporters have screamed for years that he deserves a full-time ride and sponsor. Thursday night was his first step down the path to proving his supporters correct.

Just as Larson is pissed about his results from the Duel, Jones has to be ecstatic. After turning sideways in front of the field, Jones made it to pit road without any significant damage to his car from the incident or blown tires. As the race came to the finish line, Jones got a push from his teammate Kyle Busch and squeezed between Harvick and Clint Bowyer to claim the third position. For Jones sake, he hopes he hasn’t used up all of his luck for the weekend before getting through Sunday.

The racing in the Duels was a little better than the Clash. The teams are figuring out more and more what this aero package is going to need at Daytona. By Sunday it should be interesting. For now we’ll give the Duels three cold The Dudes from Ormond Beach Brewery.

The Great American race will be on Fox Sunday, February 18th at 2:30 p.m. ET. It can also be viewed on the Fox Sports Go app. For those who want to listen along, it is available on local MRN affiliates and www.motorracingnetwork.com along with SiriusXM NASCAR Channel 90.

METHINKS Blaney should go with his boyfriend to RPM. All might be better served.

I suppose you thought Blaney should have just stayed behind your boy Joey and pushed him to the win like a good, subservient teammate instead of go for the win himself.
Sounds like sour grapes to me.

You’re right but she’s hardly alone in her thinking. In the multicar era, lots of fans have read “teammate” as shorthand for “he’s there to help my guy because my guy is way more awesome than he is.”

I know, been there done that. Totally normal reaction. But weeks later, when the sting subsides, I’d usually see it for what it was…. a guy doing his job trying to win the race. Now if he’d have made contact and moved him out of the way, that I would not forgive or forget.

The duels were more interesting to watch than I thought they would be. I was surprised that so many were willing to risk and, in a few cases, sacrifice their primary car for a meaningless starting position. I guess once they get on the track common sense is out the window.
I wonder how much the skewed cars that were set up for qualifying were responsible for the lack of handling. Looks like teams will have to weigh the risk.

didn’t make it to end of 2nd duel. they race in daytime, why run at night? i know tv audience.

glad to see blaney not adhere to the “oh let joey win” deal. petty car ran good, maybe bubba is what they need, see how he does during the year.

next week is the start of the season

The Fords were able to keep up with the chosen ones. I’ll bet F got calls from G and H to do something about that. F said “Don’t worry. I’m working on it for the 500. And don’t forget the deposits!”

Solid night, my one gripe is that we would have seen more action if it was not an impound race. Cars that were trimmed out for qualifying were hanging on for dear life at times. They should do one qualifying practice, qualify, one Duel practice and Duels. That way with this new package teams can get better dialed in for handling and put on a better show. Still a fun night of racing. The end of Duel 1 was excellent and Duel 2 showed how much handling and tires may matter on Sunday. Once the 9 got those 4 tires and track position no one had anything for him.