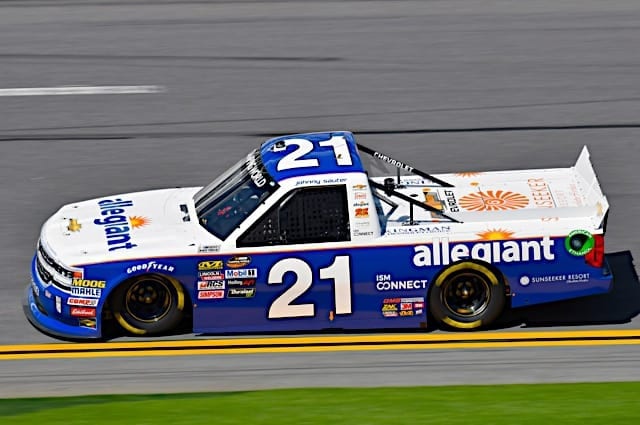 Johnny Sauter used to be the wreck at Daytona International Speedway. Three of his first four NASCAR Camping World Truck Series starts in the NextEra Energy Resources 250 were wiped out by crashes.

But lately? They’re all wiping out behind him.

Sauter survived a night where several top contenders were sidelined to triumph in Friday night’s (Feb. 16) Truck Series season opener at Daytona. Sauter slid out in front with nine laps left and then held off a late surge from Ben Rhodes to take the win.

For a time, pole sitter David Gilliland looked to be in perfect position during the final 19-lap stretch. But Sauter’s No. 21 Chevrolet got a run and was able to sneak inside Gilliland’s No. 4 from Kyle Busch Motorsports.

“Just got a big push,” Sauter said. “Got momentum, and the rest is history.”

Gilliland hit the wall moments later and ended the race five laps down in 21st. That put Sauter in the driver’s seat with a number of winless drivers or underdog trucks behind him.

Rhodes, who snuck to second by turn 3 of the final lap, wound up fourth, with Justin Haley and Joe Nemechek sneaking by at the checkered flag. It was Nemechek’s best run since 2014 as the small team with only four employees delivered a quality performance, one that could boost the No. 87 a bit financially. The season for the organization remains unsettled as son John Hunter Nemechek moves on to Chip Ganassi Racing in the XFINITY Series.

“There’s no substitute for experience,” Nemechek said afterward, revealing the team bought one set of new tires all weekend. “Without dollars, you can’t keep racing, and we rely on every cent we can raise to keep this program going.”

But Nemechek, Scott Lagasse Jr. and Haley had nothing for Sauter’s superior speed. The No. 21 Chevy appeared to drag the draft behind him for much of the final few laps in single-file formation.

It was an emotional victory for Sauter and Co. as crew chief Joe Shear Jr. lost his wife a month and a half ago. Shear, who claimed his wife was “loved racing as much as he did,” was overcome with emotion multiple times in Victory Lane.

While there was no Big One, a number of midrange crashes in the final stage slowly wiped out about half the field. Only 15 trucks were on the lead lap at the finish, and 11 trucks scored DNFs.

Among those involved in incidents were Parker Kligerman, Matt Crafton, John Hunter Nemechek, Noah Gragson and Brett Moffitt. But Jennifer Jo Cobb took the hardest hit when her No. 10 slammed the inside wall trying to avoid Grant Enfinger in a midrace wreck.

Heavy impact for @JenJoCobb; thankful to see her walk away under her own power. #NextEra250 pic.twitter.com/titDyGdUif

Cobb wound up walking out under her own power but spent nearly 90 minutes in the infield care center. Ultimately, while complaining of arm pain and swelling, x-rays revealed no broken bones, and she was released.

So now I can tell you what it feels like to hit a wall and burst into flames at 180+ mph! The way it worries family and friends is the worst part. I am ok.
My arm hit something and swelled and bruised immediately so the delay in being released was for XRays. 1/2

ALBINO: JORDAN ANDERSON GOES FROM $190 IN BANK TO TOP-10 FINISH