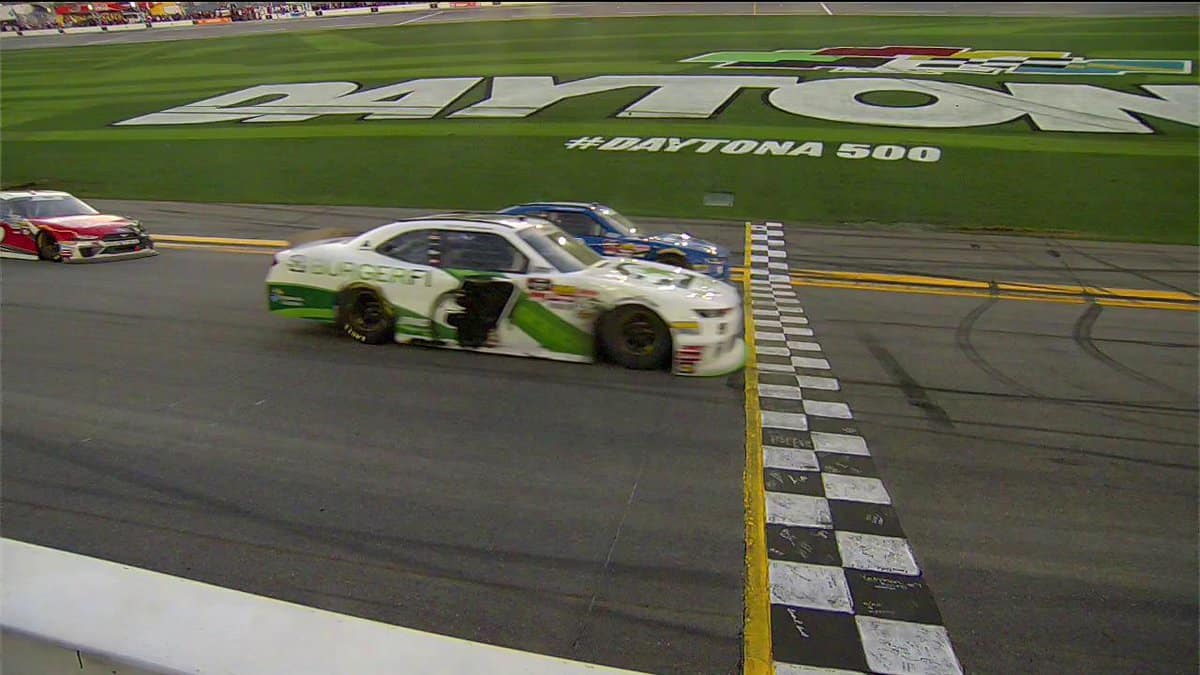 They say racing truly is a matter of inches. Tyler Reddick and Elliott Sadler proved it Saturday afternoon in the Powershares QQQ 300. A five-overtime thriller at Daytona International Speedway ended in a drag race for the NASCAR XFINITY Series season opener.

As the crowd roared, Reddick bested Sadler to the line in a photo finish. It was so close the margin didn’t even register with NASCAR scoring. The slow-motion replay cam, upon further review, showed the No. 9 of Reddick beating Sadler’s No. 1 to the line by about two inches. The difference, unofficially, was less than one-thousandth of a second. Listed at .000, it’s the closest finish in NASCAR national series history, beating a 1995 Camping World Truck Truck Series race at Colorado Speedway.

“That was insane,” Reddick said. “I saw a picture of it and it’s not much.”

“This one hurt a lot, because you didn’t know who won,” Sadler said. “I was trying to figure out how to get to him. Man, that’s tough. I don’t know how many more starts I’ll have at this racetrack. I really want to get one of the trophies at this place.”

For much of the race, these drivers listed could only dream of getting up front. Cup drivers stole the show much of the day, Kyle Larson sharing time in the lead with fellow young guns Joey Logano and Chase Elliott. Cup full-timers combined to lead 115 laps.

But a caution on lap 100 for an eight-car wreck changed the game. From that point on, the race could never get going, turning the final stretch into a demolition derby. There were eight cautions in the final 43 laps after four in the first 100.

In the end, the race went five overtimes and 143 laps to become the longest XFINITY Series race ever at Daytona. It’s the first XFINITY race to ever go five overtimes since NASCAR changed the rules to allow for unlimited green-white-checkered finishes.

“Was it only five?” joked Grala after the race. “Because it felt like a dozen.”

The turning point in that crash-filled stretch came on lap 123. During the first overtime, Larson blocked Aric Almirola but made contact that sent both cars spinning down the backstretch in front of the field.

There it is … THE BIG ONE STRIKES! Kyle Larson, Joey Logano, Chase Elliott and several other cars involved. #NASCARonFS1 https://t.co/GNNMQxMmVg

“I feel like I wrecked myself,” said Larson, taking full responsibility. 18 cars were involved in all in a wreck that altered the complexion of the race. Suddenly, most of the Cup drivers were out, and XFINITY regulars took center stage.

But from that point on, the race also couldn’t get going. Every restart, there was bumping and banging that turned into some sort of crash. The overtimes piled up while the junkyard count only grew; just 27 cars wound up finishing the race.

Meanwhile, Sadler recovered from a late spin that left him seemingly out of it. 32nd after lap 119, he charged forward and put himself in position to win by the final overtime. The veteran benefited from others, like Daniel Suarez, running out of gas as teams didn’t plan for the race to stretch so long.

The wily veteran did everything possible, also side-drafting with the No. 9 from Turn 4 to the start/finish line. But the photo finish camera proved he came up just short to Reddick, who had also run comfortably inside the top 10 most of the day until the leaders crashed out.

“It’s a tie!” Sadler joked after the race. “The tie goes to the runner.” Ultimately, though, he’s chosen not to protest despite the scoring system not able to register any difference between the cars.

Sadler and Reed were also concerned after the race about black flags for bump-drafting that nearly sidetracked both of their days. Chase Elliott also received one for locking bumpers, which left the trio confused.

“I guess I’ve got a misunderstanding of the rule,” Sadler said. “I’ll get a phone call Monday, and they’ll explain it to me. I thought you could lock bumpers to gain a position.”

Mr. Sadler was lucky to be in that photo finish after NASCAR bailed him out by needlessly calling a caution on his spin near no one.

Pathetic. NASCAR black flags him for locking bumpers half way through the race but over looks the locked bumper at the end of the race. This is why there is a credibility issue ( Brad mentioned officials were going to have to look at it) with NASCAR. If there is any consistency the 9 and the 1 finish end of lead lap and 16 wins. Oh well! Double yellow line rulings are going to bite them in the rear too.

What a bunch of crap. Good God. Typical PLATE RACE. Where was the winner the whole race? Black flags, cautions that beget cautions, cautions for a spin. NASCAR GOT WHAT THEY WANTED. PFFFFTTTTTT