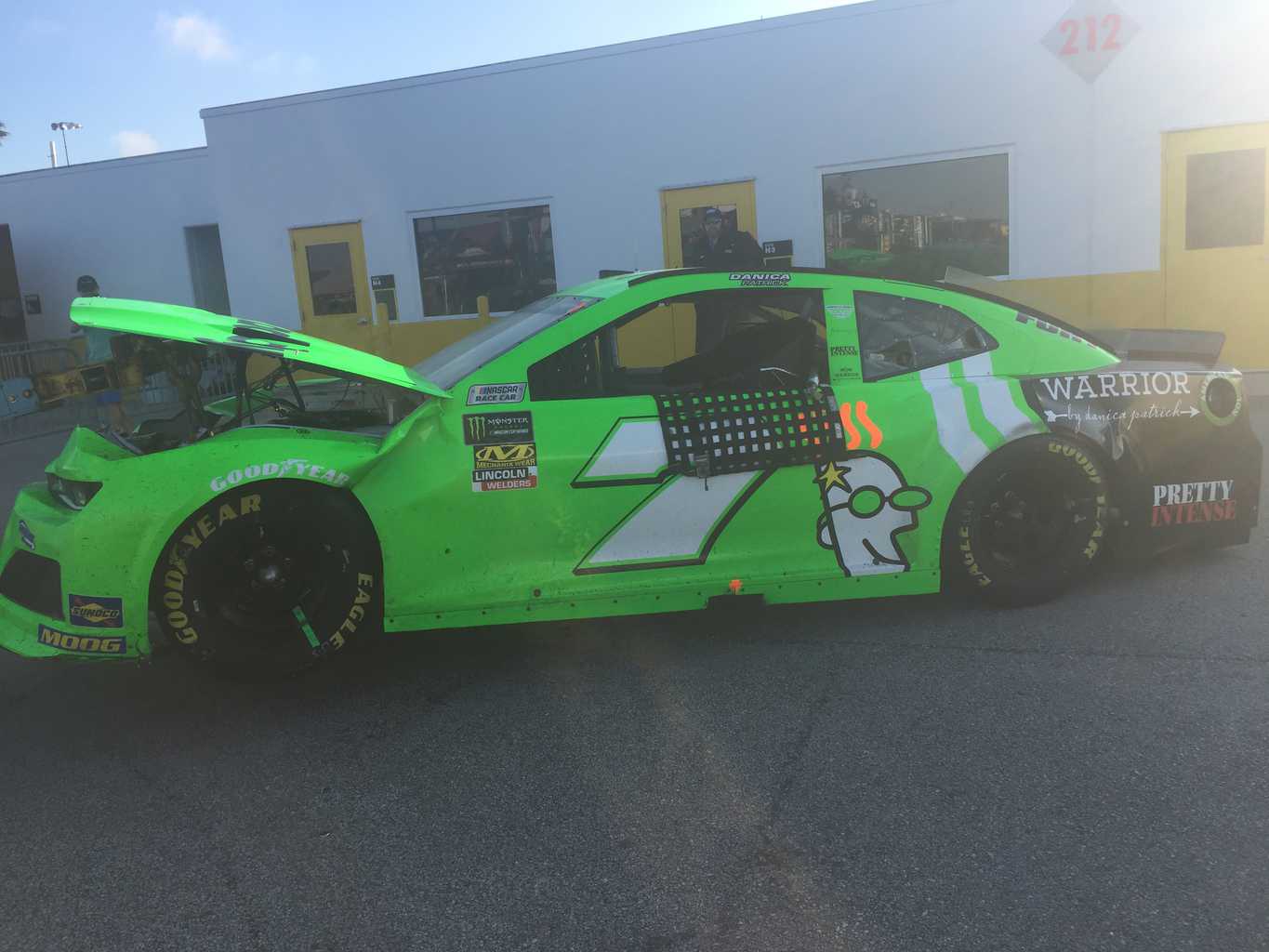 For the first half of Sunday’s Daytona 500, Danica Patrick flashed some potential. She was running inside the top 20 and looked to be in position for a solid finish.

But in an instant, her NASCAR career ended the same way last season came crashing down – winding up involved in someone else’s wreck.

It was Chase Elliott who started it all, losing it after getting bumped by Brad Keselowski on the backstretch. From there, the Big One was on, and several cars got caught up in it, including Kevin Harvick, Kasey Kahne and Patrick.

Another BIG one. #DAYTONA500 https://t.co/q5ThlqQpPF

“Just trying to feel [Ryan] Blaney out, I had a big push and just got light at the wrong time,” Elliott said afterward. “Didn’t make the right move.”

Keselowski also took some blame, claiming the new handling package left the cars on the edge of control a little too much.

“Wrecked at the front of the pack,” he said. “Trying to make a move in front of the No. 9, and it happens so fast. Too many moves, and the cars aren’t stable enough to take that. Really disappointing for everybody. Just trying to race, but I had such a run, I couldn’t keep stopping. It didn’t come together.”

The crash took out former Daytona 500 winner Harvick. He tried to continue but lost his original door in turns 3 and 4, a piece that proved to be his undoing.

Harvick: "Looks like blocking finally caught up to the 9." #NASCAR #DAYTONA500

But the big loser in it all was Patrick, running NASCAR for the final time before retiring after May’s Indy 500. The wreckage left the 2013 Daytona 500 pole winner with a racecar that just wouldn’t start.

“That’s the gamble about Daytona,” she said. “It can go so well, and it can go so awful. So I’m grateful for everything. Thankful for all the fans. It just wasn’t meant to be today.”

The crash ends Patrick’s NASCAR career at seven career top-10 finishes in 191 career starts. The first of those came at Daytona, five years ago. For a time, Patrick was very optimistic this Premium Motorsports deal could provide a storybook ending.

“The car was a lot better than it was in the Duel, a lot better than practice,” she said. “[Crew chief] Tony Eury Jr. did an awesome job, the whole team did a really good job. We pulled this together not that long ago, and that’s a tall order to get a car ready for a superspeedway that’s competitive. It was.”

It just couldn’t miss the carnage, crashes that left ten DNFs for wrecks in this Daytona 500 by the end of stage two.

At least Aaron Rodgers gets to experience what I got to experience every time the Packers played my Chicago Bears – leaving when it's about half over. #NASCAR #Daytona500

the story of her career. Shes probably been caught up in other peoples wrecks more than anybody in recent memory.
But the “she’s not one of us” crowd ignore that it was two of the anointed ones who actually caused the wreck. Go figure.

Yeah, its always was someone else’s fault….whatever.

Amen, Russ. I also noticed that Danica has had the worst luck of any driver at Daytona. Maybe all those so-called “men” who bash her can now watch the races without being fearful that Danica will finish ahead of their driver. Time to grow up, boys!

Mark. Just wait a little while. It wont be long before the same crowd picks a new target. Of course they have more than one now that doesnt fit the mold to choose from.

Her NASCAR achievements would put Ms. Patrick well above the average accomplished by the men. Yet y’all are laying down done serious misogyny. Lifelong members of The He Mans Women Hated Club? Your women folk must be pretty sick of your crap.

Bill B
Reply to  what does colon cancer pain feel like

“Her NASCAR achievements would put Ms. Patrick well above the average accomplished by the men.”
Really? Most men that have participated in NASCAR for at least 5 seasons, on a top tier team, have only had 2 top tens and 1 pole to show for it?
Name a few men that had at least a five season tenure at a top tier team and only have 2 top tens and 1 pole to show for it.
I think you are talking out of your ass. Sounds like typical PC thug, leftist bullshit. Maybe it’s not misogyny, maybe it’s a fair appraisal of her career and lack of success.

I was really pulling for Almirola to win at the end. It would have been hilarious. For 5 seasons we watched Danica blame all her problems on her crew chief, the car, bad luck, etc. and they have changed everything along the way but the driver and no improvement.
What would it have said if the first race where they tried a new driver they won?
I’d have laughed my ass off.

I was thinking the exact same thing then Austin went to work. The 10 showed what it could do.

Same story for SHR#10. Crashed out. The facts didn’t mean anything before, but now they do I guess. What a bunch of haters!

I forget, what race was it where Danica was leading the race with a lap to go and got purposely wrecked out?
I watch every race but I must have dozed off during that race and missed it.

And RE: “The facts didn’t mean anything before”… to what “facts” are you referring?

Those who point out the actual (sucky) results aren’t necessarily haters, they are the natural reaction to those others with their rose colored glasses that heap unearned praise and importance upon her while ignoring the actual statistics, which I call “facts”.

Anyway, we won’t have Danica to kick around anymore. She’s in a far, far better place,,,,, somewhere else.