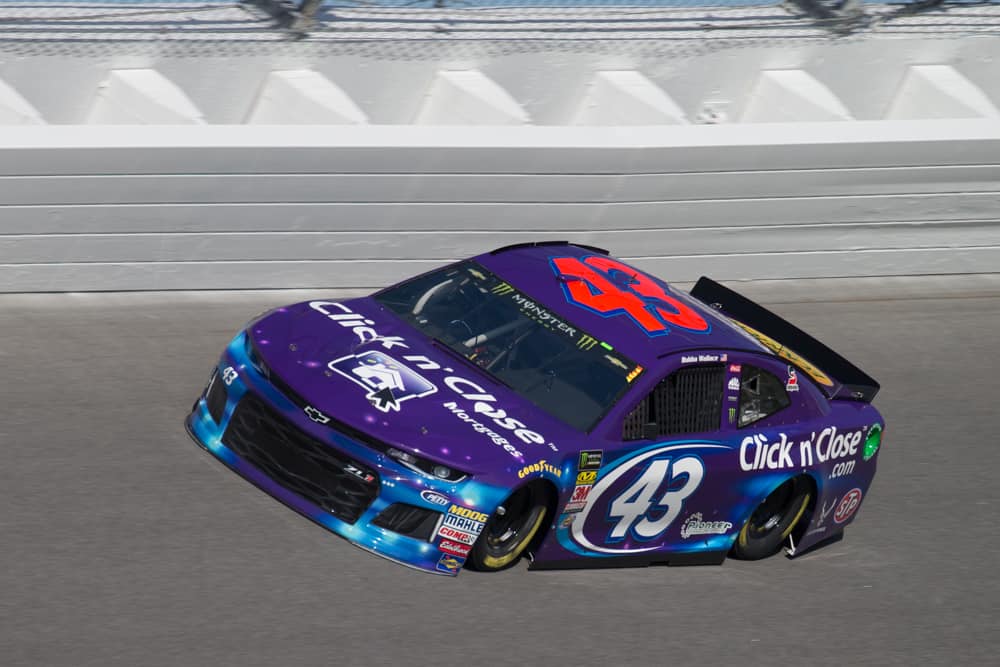 At first, Darrell Wallace Jr. was all smiles, entering the Daytona International Speedway media center joking around. But a few seconds later, his mom ran up to him, crying out of joy for her son.

“I waited so long for this, baby,” Desiree Wallace, his mom, shouted in his arms.”

The tears continued for several moments, flowing down his eyes as his older sister, Brittany Wallace, joined him on the podium. The deep breaths and mid-sentence breaks showed just how important this day is for the Alabama native and his family.

“I just want to make my family proud,” he said, tearing up once again.

Wallace came a few feet away from defeating eventual race winner Austin Dillon to become the first African American to win a Monster Energy NASCAR Cup Series race since Wendell Scott did so in 1964 in Jacksonville.

Congrats to @BubbaWallace on finishing an impressive 2nd place today. Bubba carried a ton of weight on his shoulders the last 10 days. Media responsibilities that smothered him personally. But he handled it like a veteran.

“I just try so hard to be successful at everything I do,” Wallace said, “and my family pushes me each and every day, and they might not even know it.”

At this time one year ago, Wallace was unsure how often he would race. After signing on to compete for Richard Petty Motorsports, replacing an injured Aric Almirola in four Cup races, he impressed the organization enough to sign on for a full slate in 2018.

Though Wallace doesn’t have a full season’s worth of primary sponsorship, he brought in a new company for the Daytona 500. Click n’ Close came on board, stepping to sponsor the No. 43 car in multiple races, including this weekend’s season-opener.

Prior to the race, the emotions were already hitting Wallace. Formula 1 champion Lewis Hamilton sent a tweet to his five million-plus followers, showing signs of encouragement for the rookie driver.

Hey @BubbaWallace! Wishing you the absolute best today in your race. Smash it!! ?? ?

Besides Hamilton’s kind words, he even received a call from Baseball Hall of Famer Hank Aaron.

“Really cool and really special for Hank Aaron also to call right there before was really special, and just knowing that people are tuning in and hopefully noticing the new face and the new change that’s coming to NASCAR and they get behind it and support it,” Wallace said.

“He just said, hey, good luck, and just have a good race today, and that was it.  He knew that we were pressed for time, and it was five seconds, and that’s all he said.”

Wallace started the race in seventh after finishing third in Thursday evening’s first Can-Am Duel 150 qualifying race. He worked his way up to second early in the going, staying there for several laps after Corey LaJoie’s engine expired to cause a caution.

From there, he had to avoid several major wrecks, including a nine-car incident at the end of stage 1.

Wallace fell back to 22nd after coming in too hot during a pit stop during a lap 94 caution. He recovered quickly, though, shooting his way into the seventh spot by the conclusion of the second stage.

“I don’t care about the green/checker as much as the white/checker,” says @BubbaWallace

For the remaining 80 laps in the race, Wallace’s team never fell outside of the top 15. He methodically moved through the pack, restarting sixth in overtime. As he rode around the high lane for two laps, he helped push Dillon’s No. 3 car to the front.

When Aric Almirola crashed entering Turn 3 on the final lap, Wallace was able to focus on what was in front of him: Dillon.

The No. 43 car entered the tri-oval with Denny Hamlin beneath him. When they came across the finish line, the two wrecked. Hamlin failed to secure the runner-up position, giving Wallace and RPM a runner-up result to start the year.

After the race, Wallace had this to say about the incident:

"I might need to see the replay before I say anything stupid," said @BubbaWallace of the wreck with @dennyhamlin. "But he might need to take some Adderall for that one." #NASCAR #Daytona500

The battle for the No. 43 team is just starting now that Wallace and crew chief Drew Blickensderfer have a top five to get the season going.

“That’s why we always say when we go to Atlanta, that’s when we really see who’s playing what cards,” Wallace said. “Just from everything that’s been going on in the off‑season, switching over to Chevrolet, the alliance with RCR, they were rebuilding their stages there at the end of the year for their program. We’re heading in there like we’re going to win that race.  But at the same time, we know we also have a lot of things to check off the list.”

Bubba has a smart mouth, somebody outta smack him. But you will be deemed a racist. And I am no fan of Hamlin. But all week he (BUBBA) has been talking big time smack with the media, social media fawning over him. Believing his own press I guess. Let us see what the mile and a half’s bring…..LOL. All those years in the NASCAR series and one truck race to his resume, o.k. We shall see what we shall see.

The hype machine is currently at warp speed.

Bubba has 6 truck wins, including Eldora and 2 at Martinsville. I think you need some talent to do that, especially when you win Eldora with no real dirt experience.

Great. so what…he is in the big leagues now and he thinks he is better than most. Look up his video’s. He is talking major smack! He sucked in XIFINITY and cost Jack a lot of money, a lot. He didn’t last long a Gibbs, Joe decided he did not want him back, with good reason. Obviously. So where am I wrong? He is overhyped for obvious reasons in my book, and STAT wise..till her proves otherwise, he is an overhyped hack! The Blaney love fest is a worn out like a year ago….too. IMO.

And… kb, how many NASCAR national series wins do you have?

CHUCKLES you and your ilk should learn the art of debate or a good burn. I have never purported myself to be a Cup driver, an Xfinity driver, or otherwise. I do know I have not been “fired” or let go from the likes of Rousch or GIBBS. And I do know I have not caused anybody huge expenses for my negligent driving, or my mouth talking smack that I in my professional career have not delivered on. Dumb Ass! I do know I know how to read stats and equate them to years, you all make him look like a new born babe into the world of the upper tiers of racing. FACTS, baby facts! Until he produces with his driving and not his mouth, he is just another jerk who has gotten many chances and God willing if he doesn’t produce this time, it is his last. Sick of hearing and seeing him all over the NASCAR media. HYPE HYPE HYPE HYPE!

Well, I know one thing for sure. Personal insults are not the way to influence people to accept your point of view. The kid did a good job. He was pretty much in the lead draft all day. But, then, you know more than the rest of the world combined and you think insulting people is the way to go… whatever

kb, you’re a little over the top but that’s the way some people role

his fame won’t last petty won’t put up with it he should have hired matt k.

I want to see if NASCAR talks to Bubba regarding the adderall comment like they did Denny. My assumption would be a big “NO” because that would be racist. His cocky attitude really tuned me off and thinks he’s a big deal now he has a full-time ride. Let’s see how he performs on the short tracks and mile and a halves. After a few races there let’s see if he still runs his mouth. One good plate track finish doesn’t prove a thing…

AMEN BROTHER. Saw him goofing on the PENSKE drivers and the whole .ORG! Are you kidding me? And this is recent. He is believing his own hype, which is what they do to a random Tom, Dick, Harry or Danica every year. What a dummy.

YUPPERS. Get the mute button ready!

Well, I know one thing for sure. Personal insults are not the way to influence people to accept your point of view. The kid did a good job. He was pretty much in the lead draft all day. But, then, you know more than the rest of the world combined and you think insulting people is the way to go… whatever