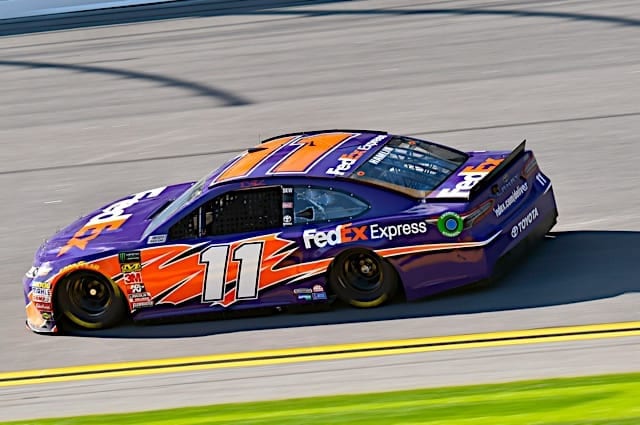 Denny Hamlin was two laps away from winning a second Daytona 500 on Sunday, but the green-white-checkered finish did not go in his favor.

The No. 11 team was forced to rebound from going nearly two laps down after sliding through his pit stall during the first pit stop on lap 10. The Mike Wheeler led crew serviced Hamlin while he was outside of the box resulting in a one lap penalty.

Hamlin lost the draft but tagged onto Kasey Kahne and David Gilliland. When a lap 52 caution came out, the No. 11 team was able to catch back up to the tail end of the field. Nine laps later, he was on the lead lap when the first big accident of the race occurred, taking out some of his biggest competition.

“I think we seen the intensity ramps up as soon as these stages start to end and people are battling for those points,” Hamlin said of the crash that gave him the free pass. “Luckily for me, it was a blessing that we were a lap down at the time and we weren’t in that first melee. We maybe would have been in. We battled back and gave ourselves a chance to win.”

During the stretch to the finish, Hamlin was part of the 10-car lead draft. When the other nine came to pit road with 29 laps to go, Wheeler kept the No. 11 Toyota out and pitted by itself on the following lap.

Meanwhile, that nearly took Hamlin out of contention for the 500 victory.

“Really it was too good of a stop,” he said. “We wanted to work an extra lap on pit road so we had a clear in, clear out. That was worth a little bit more time. The downside to that was it put me out in the lead so far that we got ate up on the pit stop.”

When William Byron spun out of Turn 4 with 10 laps to go, it allowed Hamlin to regroup for a shot at the victory. More importantly for the Virginia native, he missed the 12-car pileup with three laps to go, surging to the lead for the green-white-checkered finish.

While Hamlin restarted as the leader, he had a Chevrolet in Chris Buescher lined up on the inside behind him in third and Paul Menard in fifth, making it three different manufactures on the bottom line, and a lack of communication.

“It’s all about the third car and we were trying to get the [No.] 21 to buy in on the radio and we didn’t get a response on the radio,” Hamlin said. “Experience will tell you it’s about the third car in line, not the first two. The [No.] 3 had the [No.] 43 behind him, pushing the 10 and that was hit for us. The [No.] 37 stuck with us and we knew we needed one more car to make that inside line to work and we couldn’t get the buy in.

“It’s really whatever line gets organized the best is the one that wins. I had the buy in from the [No.] 37, they stuck with us there, but we just couldn’t get the [No.] 21 to stay in line and it broke up the inside line. We tried all we could to buy in and get the inside line, but we just didn’t get it to work.

When the three cars on the bottom couldn’t hook up to draft, Aric Almirola, Austin Dillon and Darrell Wallace Jr. got by Hamlin. Though Dillon turned Almirola on the final lap, the No. 11 car could only get to third.

The third-place finish marks Hamlin’s fifth top-five finish in the Great American Race over the past seven years, including his 2016 photo finish victory over Martin Truex Jr.