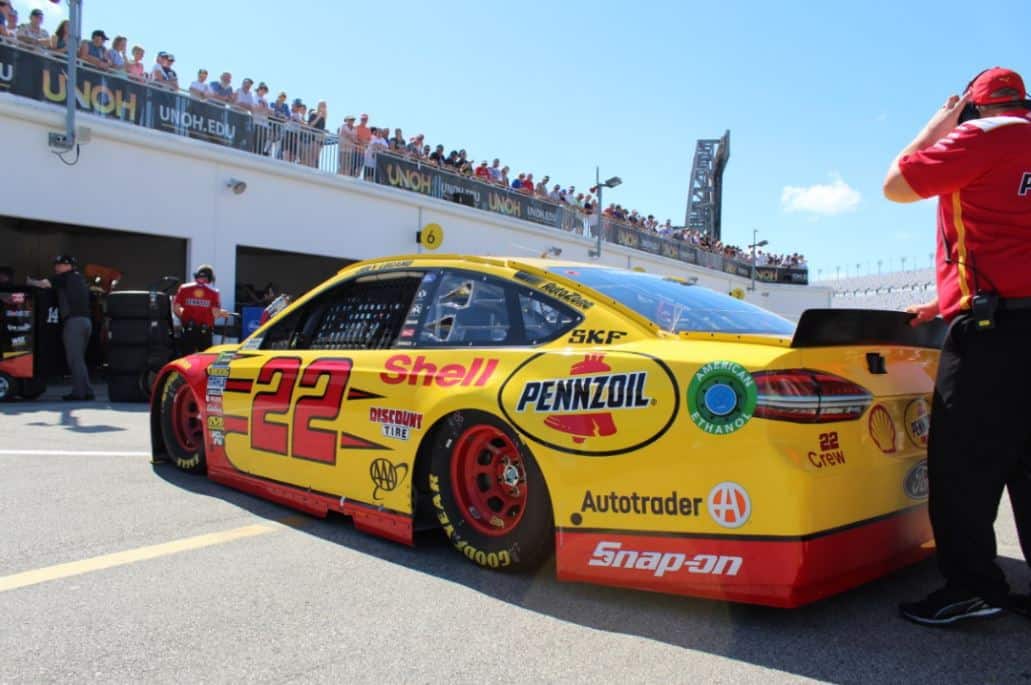 The Daytona 500 wasn’t exactly what Joey Logano had in mind this year. The No. 22 car entered Daytona International Speedway with an expectation of competing for the win.

In the end, that’s exactly what happened although his race resembled a bit of a yo yo. Up, down, up, down, and finally up again, Logano battled to a fourth-place finish.

When he strapped out of his car and began to speak to media, he glanced at the ISM Vision screen, watching the end of the Great American Race. It was like Logano was amazed he was around to live it. From getting a speeding penalty to being caught up in the final wreck of the day, he somehow managed to survive.

“We had more ups when it counted,” Logano said post-race. “Dang it. I just made a mistake there towards the end.”

Logano ran inside of the top five for the majority of stage 1. By lap 49, he took the point, getting around Hendrick Motorsports’ Chase Elliott. But as the stage neared conclusion, moments after 2017 Daytona 500 champion Kurt Busch got around the No. 22 machine, he experienced a major issue that put a halt to his hunt for the win.

“We had a left-rear fender rub,” Logano said. “We fixed that, from a lap down, got our lap back and got some stage points.”

By the time stage 2 got going, Logano began fighting back. He made his way from 35th to third at the conclusion of the stage.

But on lap 171, in the midst of green-flag pit stops, the No. 22 car was caught speeding on pit road. The pass-through penalty that ensued put him a lap down, forcing him to battle back while the rest of the field was single-file.

With nine laps remaining in the event, rookie William Byron spun out by himself, causing a caution. Fortunately for Logano, it was the break he needed.

Said Logano, “It cost us there, but I was able to get the lucky dog. I missed a couple of crashes and got ourselves in the top five.”

Logano was involved in the final 12-car incident of the race, but avoided any major damage. Once the green flag waved for the overtime restart, he set his sight on the victory.

However, he failed to win his second career Daytona 500.

“It was an aggressive race at the end like you would expect at the end of the Daytona 500 or any speedway race like we’ve seen in the last few weeks here,” Logano said. “Dang it. There were a lot better cars that could’ve won the race and one of them was ours.

“We never quit and we never get worked up about anything. It keeps us running. I just hate making that mistake.”