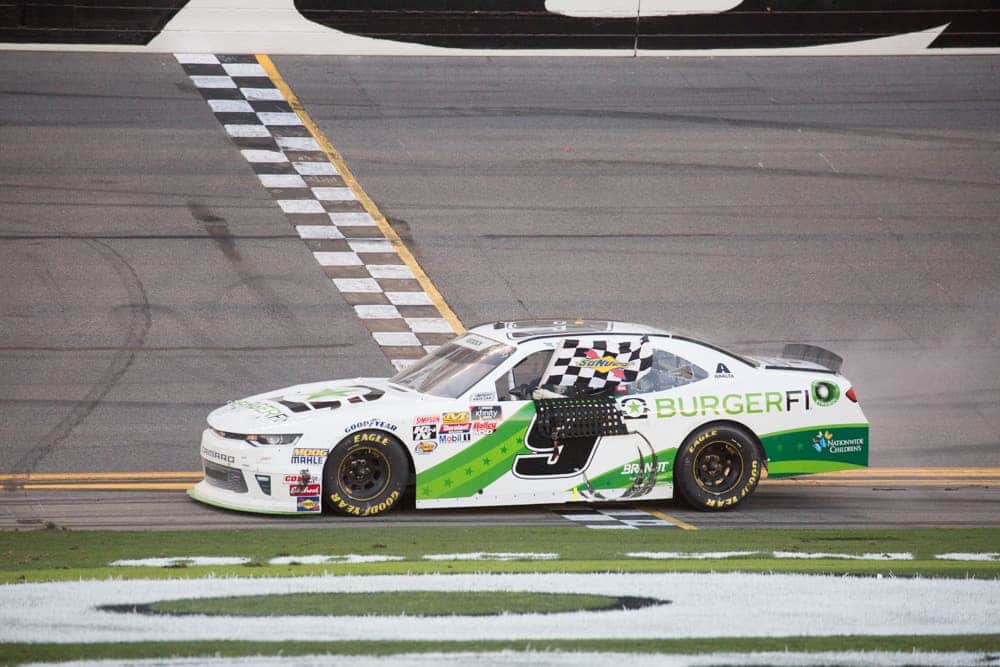 Except this 500 winner was very different. While Dale Earnhardt rattled people’s cages, a man’s man from the south, the 27-year-old Dillon is… a millennial. He has a video podcast, “Barn Life,” with best friend and jackman Paul Swan. He’s a clean-cut extrovert, an excitable guy with fashion sense and one who told a five-minute laugh out loud story about his wife crying over a prayer in the media center. (Keep in mind the guy just won the Daytona 500). He’s authentic, he’s charismatic, and in his own way, he doesn’t back down like Earnhardt. (Dillon’s answer to fans who hated that last-lap contact with Almirola? “I guess I could have lifted and gave it to him. I guess that was my other option, give up a Daytona 500 ring that I’m wearing.”)

In summary, Dillon showed a personality; and he had company. The runner-up finisher, Darrell Wallace Jr., showed some teeth, ripping Denny Hamlin after their post-race wreck. (Let’s just say Hamlin’s Adderall comments might haunt him all year). But then, Wallace turned around, overcome with emotion and broke down in the media center. The five-minute hug with his mom, tears of joy endeared him to new fans as the highest-finishing African-American in Daytona 500 history.

Add in Ryan Blaney, who led a race-high 118 laps Sunday, and this 500 was dominated by young guns. With big names like Jimmie Johnson, Kevin Harvick, Kyle Busch, and Brad Keselowski out of contention by halfway it pushed fresh faces to the front by default. The end result? An entertaining 500 in which those young drivers stepped up and hit a home run.

“Right now I feel like a lot of these guys are coming in, we’re all going to start trying to be ourselves because the people that led our sports for so long have kind of moved out,” Dillon said. “I think there’s going to be some great battles this year with all the young guys. There’s going to be storylines, and the NASCAR fans are going to love what they see. I really do. ”

If this race is a sign of the season to come, NASCAR has a lot to be excited about. – Tom Bowles

JR Motorsports teammates Tyler Reddick and Elliott Sadler had a drag race to the checkered flag to decide the PowerShares QQQ 300 at Daytona International Speedway on Saturday (Feb. 17). Reddick was able to hold off Sadler by a 0.0004 margin of victory, the first time NASCAR has ever had to measure smaller than the thousandths of a second.

It was Reddick’s first race in the No. 9 Chevrolet and he had huge shoes to fill. The past two drivers of the car, Chase Elliott and William Byron, won the NASCAR XFINITY Series championship. Reddick seems up for the challenge as he is now locked into the playoffs and continuing the car’s winning ways.

Sadler, on the other hand, continues to come up just short of winning. The near-miss second-place finish comes a few months after he finished runner-up in the final standings for the fourth time of his career. He is currently second in the standings.

The race also made history by having five overtimes. The wreck-fest stemmed from the NXS field racing more aggressively earlier than in recent years, as well as the cars being harder to handle in all of Speedweeks. Many of the moonlighting Monster Energy NASCAR Cup Series drivers wrecked out, which made way for NXS regulars to battle for the win and for underfunded teams to have record days.

With many of the Camping World Truck Series stars crashing out, young guns and underdogs stole most of the show in the NextEra Energy Resources 250 at Daytona on Friday night (Feb. 16). However, it was 2016 champion Johnny Sauter who came out on top. It was Sauter’s 18th career win and his third at Daytona — the most in CWTS history.

Though any win is special at Daytona, this one carried a bigger meaning to the No. 21 team. Sauter’s crew chief, Joe Shear Jr., lost his wife unexpectedly in December, and of course, the victory meant a lot to Shear.

“This is very, very, very special here,” Shear said. “She was in love with racing as much as I was. She was looking over us and helped us to this win. I’ll never forget this one. Getting back on the road and getting back to work was the biggest thing that kept me going. It’s sad and I think about her all the time.”

Sauter’s win marks the third straight for GMS Racing. He won the season-opener in 2016, and virtual unknown, Kaz Grala, who has since graduated to the XFINITY Series, scored the victory last year. For Sauter, it’s a mirror image of how his championship season in 2016 began. More than likely, he’s locked into the playoffs barring some major collapse or several multiple-race winners, and the veteran has the knowledge and the equipment to close out a race when he needs it the most. – Beth Lunkenheimer

With NASCAR taking center stage, the world of sports car racing has been quiet lately.  However, there have been a couple of notable moves lately.

Meanwhile, in the world of the FIA World Endurance Championship, two teams have voluntarily withdrawn their reserve entries for this year’s 24 Hours of Le Mans.  Shortly after the 60-car entry list was revealed, ARC Bratislava revealed to SportsCar365.com it pulled its entry due to dissatisfaction with being given the eighth reserve spot (the team raced in 2017, finishing 19th in LMP2).  On Friday, they were joined by IDEC Sport, which announced its decision to pull the No. 27 from the reserve list and focus on the full-time No. 28.  IDEC Sport’s reserve entry was a Ligier JS P217-Gibson that will race full-time in the ELMS, while the full-time WEC car is an ORECA 07-Gibson.