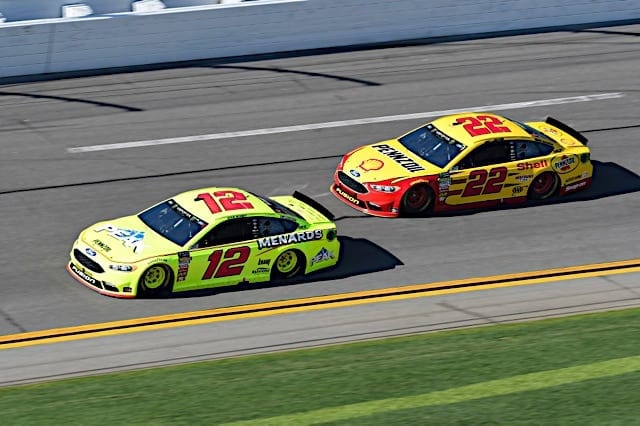 Entering Sunday’s Daytona 500, Ryan Blaney was among the favorites driving for Team Penske. By leading a race-high 118 laps, the No. 12 car proved to be the quickest one on track.

It all looked like it was going to work out. And then… Lady Luck intervened.

Over the final 80 circuits, Blaney led until William Byron spun out with 10 laps to go. For those 70 laps he was out front, the North Carolina native paced the field against the wall, which saw mostly single-file competition. But when the caution flew, it created chaos.

“Probably with five to go, it was crunch time, and we were five laps to go [when we went back green],” Blaney said. “I thought we could control pretty well from the lead, it just didn’t play out that way.”

On the ensuing restart, Blaney got stuck in the middle of three-wide and fell to fifth place. Within a lap, he got back by 2017 Daytona 500 winner Kurt Busch to re-take the lead.

With three laps left, the two Fords tangled. That triggered a 12-car pileup which saw Blaney’s Daytona 500 dreams go up in smoke.

“I got a good run on the [No.] 41 and I shoved the 41 pretty hard,” he said of the accident. “The [No.] 11 blocked him last minute and the 41 went to the top. I was already in the middle and I got into his left rear and turned him. I hate that it happened. It was just kind of a last-minute move and I was already in the middle. I hate to spin another Ford out, but it was all in the wrong spot at the wrong time.”

Blaney admitted he knew the race wasn’t going to go to the end single-file, and predicted that business would pick up as the checkered flag drew near. But he couldn’t find a way to get it done.

It’s a tough ending to what was a great Speedweeks for Team Penske’s newest driver. Blaney began the Great American Race in fourth after winning the second Can-Am Duel on Thursday evening. Following the first stage, he was running in fourth position, the third-best Ford in the race.

However, once stage two went green the No. 12 Ford shot up to the top of the leaderboard. From there, he didn’t look back, winning the second stage.

The disappointing seventh-place finish comes one year after Blaney finished runner-up in the Great American Race, ironically to Busch. On that February day, he led two laps, but this one’s harder to swallow leading over half the event.

Though having the dominant race car, Blaney realizes he will have another shot at the Daytona 500 trophy. But for the 24-year-old, if you don’t win, it’s disappointing.

“You can have the best car in the world, not win the race, and it doesn’t matter,” he said. “I thought we had a good car today, but you just try to figure out what you can do better next time. That’s a shame that didn’t work out for us, but you live, you learn and move on. You’re disappointed because you dominated a good race, but it’s the way it goes sometimes.”

I was actually rooting for Yurt, cool to see two in a row. And ARIC. Flucking Dillon. PFFFFTTTT.

Did Blaney go from his race car right to hauler or motor home? The location of that TV interview was weird.