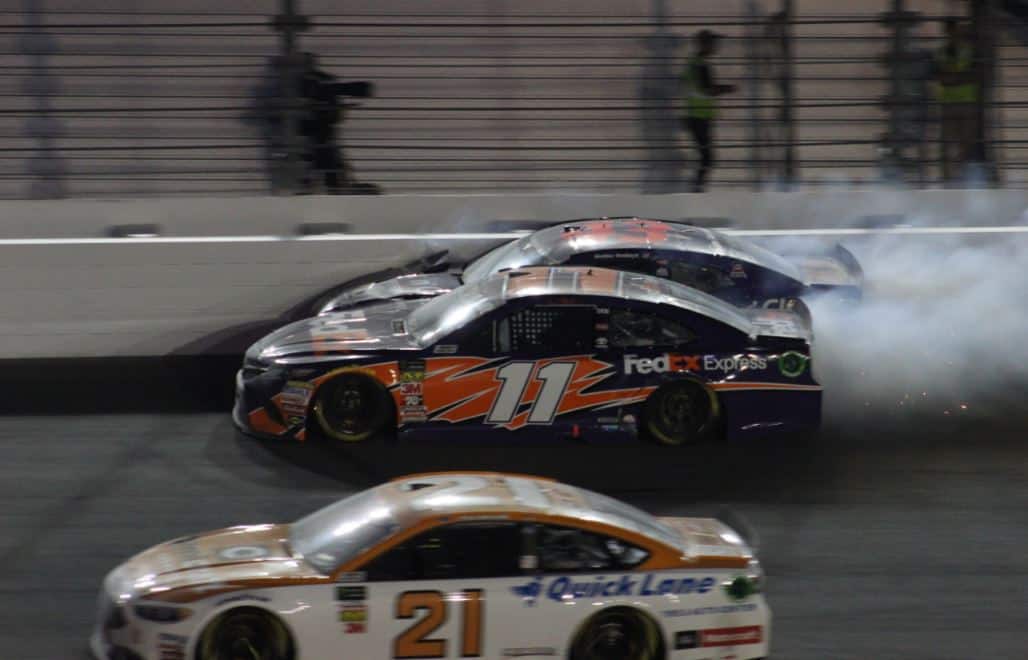 Before a multi-car pileup with a lap remaining, there were a couple of cars in the top 10, sometimes the top five, that fans don’t see there very often.  Matt DiBenedetto, driving for tiny Go FAS Racing, and Brendan Gaughan, driving for part-time owner Mark Beard, were looking for both organizations’ best finish when they got tangled in the lap 199 crash triggered by Kurt Busch and Ryan Blaney.  Neither driver had anywhere to go, but neither had any fault in the incident either.  They ran the type of smart, clean race that all too often seems to end in heartbreak rather than the finishes they deserved.

No matter what package NASCAR throws at the racecars, one thing doesn’t change at Daytona: you generally get one shot at a block. If you miss it by a fraction of a second and you’re not caught in the aftermath, you’re lucky. Of course, you’ll still have a dozen other drivers calling you a litany of very creative but largely unprintable things, some of which are physically impossible. Ricky Stenhouse Jr. just missed on lap 60 and havoc ensued.  Chase Elliott mistimed a block on lap 102 and… more havoc. Down to the wire, Denny Hamlin threw a block on Kurt Busch and Busch lost just enough momentum for Blaney to turn him around. Hamlin’s block wasn’t a bad one, but the chain reaction behind it was classic Daytona. It’s all part of the game, but in a game of inches, it can save a win or cost one.

Where… did Austin Dillon come from?

Dillon, who started 14th on Sunday, found Victory Lane for just the second time in his Cup career. A solid if not brilliant plate racer, Dillon has had some Cup success at Daytona in the past, with six top-10 runs in 10 starts. That number double the number of top 10s he’s amassed at any other track, with his next-best top-10 total of three at Michigan. Dillon has also had much better results at Daytona than Talladega, where he has just two top 10s and four DNFs in nine races.  Sunday, he led just one lap, making the grand total of circuits led in races he’s won three.  Sometimes it’s not about leading all day, and Dillon was able to capitalize for the second time.

Teams learned their lesson well in 2017: stage points, and especially stage wins, matter.  The first 60 laps at Daytona mattered maybe a little bit too much, as a poorly-timed block by Stenhouse triggered a chain reaction that claimed four cars before the green-and-white checkers even flew. Obviously, you won’t see that at most other tracks, though it did happen last year, but after Martin Truex Jr. practically punched his ticket to Homestead on stage wins alone, the stakes are crystal clear.

How far will drivers go for playoff points this season?  In the long run, gunning for the stage win backfires for drivers if they’re not around for the end.  The high stakes bring some excitement to points in the race that might not have had much action before, but they’re still a strategy call. It will be interesting to see how far teams will push the envelope for a few extra points this season.

Why… didn’t Ryan Blaney pull it off?

Blaney led five times for a race-high 118 laps and won stage two, making him an early favorite to win. He was leading with three to go in the scheduled 200 laps, but Daytona is Daytona, and things happened.  First, with 11 to go, William Byron spun, bringing out a caution. That meant getting back up to speed in two lanes instead of holding point in a stronger line and seeing if anyone else could make a run.  He might have had one more run, but a stackup coming to the white flag turned Blaney into a pinball. While he escaped major carnage, he lost his chance to bring his brand-new team its first win, instead finishing seventh.

How… many didn’t make it to the end?

Compared to some races, this one was relatively tame in the attrition department, with 15 drivers calling it a day early. Corey LaJoie, who’s credited in 40th, failed to finish due to an engine failure after just eight laps, with the remaining 14 due to accidents. And it was hardly a pack of underdogs back there. Among the DNFs were four former champions, with 10 titles among them—Kurt Busch, Kevin Harvick, Brad Keselowski and Jimmie Johnson. Rookies? Nope. Both rookie contenders made it to the end running, though Byron was a bit worse for wear. A Toyota, six Fords and eight Chevrolets went to the garage early.  It’s the nature of the plate-racing beast, but no matter how you look at it, it was an expensive day for a lot of race teams.

But I wonder wasn’t the real enduring story of the a charter team declaring bankruptcy? The ramifications are probably more long lasting than the winner.