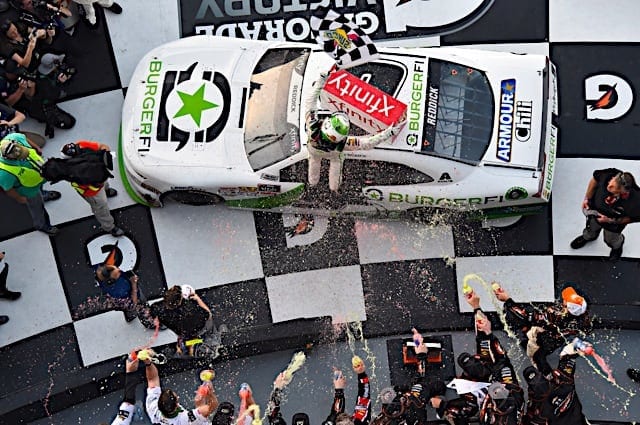 Saturday’s Powershares QQQ 300 at Daytona International Speedway in the NASCAR XFINITY Series will go down as an instant classic, and seemingly never-ending race, as Tyler Reddick crossed the finish line first in the fifth overtime.

Reddick led 10 laps on the afternoon, most of which came during the 23-lap overtime stretch. The No. 9 car beat JR Motorsports teammate Elliott Sadler by .001 seconds, the closest finish in Daytona history.

The two dominant cars on the afternoon Kyle Larson (57 laps led) and Joey Logano (26 laps led) were caught up in the melee during the first overtime when Aric Almirola spun the No. 42 machine from the lead, causing two-thirds of the field to crash. Larson continued on to finish 29th; Logano’s day ended in 34th.

This race was an all-time classic, as the racing was action-packed from the green flag. If a viewer didn’t like that race, I’ve got nothing for them.

The first 80 laps were run fairly clean, with only one caution for an incident. But with 25 laps to go, the tide began to turn when Sadler and Chase Elliott were blag flagged for bump drafting for too long. Three laps later, the first of eight crashes during the final 40 laps occurred.

“The first 80 percent of the race was an awesome race,” Dale Earnhardt Jr., co-owner of JR Motorsports, said. Indeed it was, and if the current aero package is the one going forward, it gets two thumbs up. This was the best plate race of Speedweeks so far, and best overall plate race in some time.

By true racing standards, there was nothing to not like about the XFINITY race. Yes, the event went 23 laps past the scheduled distance, but it was filled with drama — good drama, mind you.

At one point, there was a member of Elliott’s pit crew that had to run back to the hauler to a right side window, because at plate tracks, a window is required on the passenger side. The fellow ran back to the hauler and back, allowing the team to replace the window and not lose a lap. This got a big cheer from the Daytona diehards.

The only negative aspect of the race could have come in the opening 10 laps, when Austin Cindric made a bold move, triggering an eight-car pileup that took out some good racecars. That aggression is part of the game at plate tracks, but in order to finish first, first you must finish. The start of his XFINITY career began much like his full-time Camping World Truck Series career did one year ago, except that time it took only two laps for the Big One to happen.

It took only 10 laps for Cindric’s first start of his XFINITY season to come to a close, and it should have came a lot sooner. The No. 60 car was in the middle of three-wide racing for much of the first 10 circuits and lost control of his Roush Fenway Racing Ford underneath Daniel Suarez.

The spin in the tri-oval turned into an eight-car pileup, including eventual race winner Reddick, as well as Christopher Bell, Brandon Jones, Brandon Brown, Josh Williams and Reed.

“I learned that waiting until the end really isn’t a thing,” Cindric said. “It is tough because you just work all year to get prepared, and you work all year trying to find seats to sit in. It is just unfortunate it only lasts that long.”

Cindric finished shotgun on the field and tore up a handful of racecars.

Three weeks ago, Garrett Smithley wasn’t sure what his 2018 plans were. But team owner Johnny Davis hired him on for his third full-time season.

Last year, Smithley picked up his first career top-10 finish at Daytona in the season-opener. This season, the No. 0 JD Motorsports team had a unique plan it was sticking to, regardless of circumstance. But the saying “patience is a virtue” played dividends for the Georgia native, as he recorded his first top-five finish at the checkered flag.

“We were about 30th with like 10 to go,” Smithley said. “We rode and rode and rode, and that was our strategy all day long. We got up to 14th and had some really good restarts. I made a mistake on that restart and didn’t go high when those guys went, but it worked out as the [No.] 18 gave us a heck of a shove down the backstretch. We didn’t have to use Flex Tape last time, so that’s a good thing.”

The finish was even more meaningful for for the JD Motorsports group, as Davis lost his father earlier this week. Smithley dedicated his finish to Davis’ family.

“I had a guardian angel,” he said. “We’re all such a big family here, and it’s so freaking cool, it’s Daytona. It’s everything we need for the start of the season. … This thing came together so incredibly late in the game, and to come here and do this and have momentum for the rest of the season is so cool.”

Following his eighth-place finish at Daytona last season, it took Smithley until the 15th race of the season at Iowa Speedway to crack the top 20, when he picked up a 10th-place effort.

Monter Energy NASCAR Cup Series regulars dominated the majority of the race, winning the first two stages and leading 106 of 143 laps. During the first overtime, five of the six Cup drivers were caught up in the mess. Larson was leading when Almirola had a huge run up at the backstretch, turning the No. 42 car into the middle of the field and collecting fellow Cup drivers Logano, Austin Dillon and Chase Elliott. Suarez was the highest finishing Cup driver in eighth.

“This feels like victory lane for me. I think that was the most satisfying race I have every driven in. Getting the win last year was obviously unbelievable, but we sat on the pole with that car. It is going to be a fun year getting to race with these guys 33 times.” – Kaz Grala

“We knew coming into Daytona there could be a mishap. We tested at Atlanta [Motor Speedway], and it’s one of my favorite racetracks, so I am excited to get there.” – Christopher Bell

The opening 117 circuits was some of the best XFINITY restrictor plate racing of all time. During the first 81 laps, there were just three cautions, two of which were stage breaks. However, there was a ton of passing and a lot of bold moves at the front of the field.

As the checkered flag drew near, the intensity picked up and up and up. When Sadler spun with two-and-a-half laps to go, the 24 hours of Daytona turned into a five-overtime thriller, and for a second it seemed we were seeing replays of Syracuse vs. Connecticut’s six-overtime bout in 2009.

The XFINITY Series returns to action next Saturday, Feb. 24, at 2 p.m. ET as part of a doubleheader day of racing with the Camping World Truck Series. Kyle Busch is the defending winner, leading 26 laps. Cup Series regulars combined to lead all 163 laps.

I timed one of the TV time outs and it was ten and a half minutes. That probably means at least nine minutes of commercials. It’s nice to see they’re cutting the time of the time outs.

Seeing as how long it took to finish the event how did they keep the commercials coming if they only sold them for the planned time of the event? It ran over by almost an hour and that’s a lot of commercials that shouldn’t have happened.