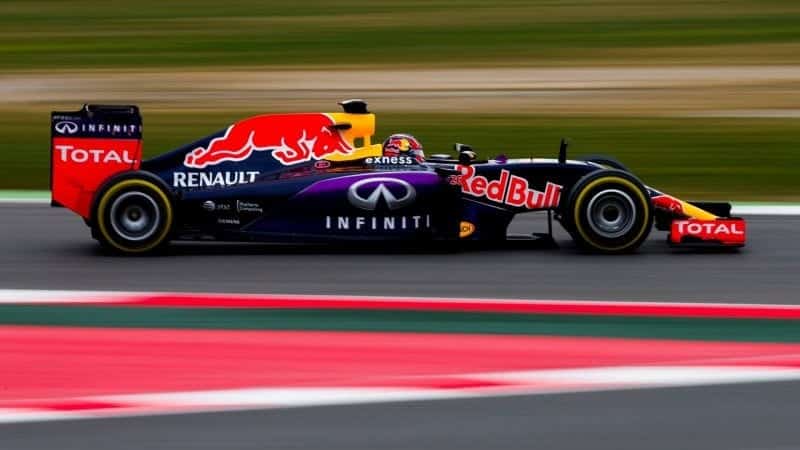 Becoming one of the only real challengers for the Formula 1 World Championship along with Ferrari and Mercedes, the Red Bull Racing Team launched their RB14 challenger Monday morning (Feb.19) at their factory in Milton Keynes, England.

The car itself did not show its original colors of yellow, dark blue or red, but had a dark blue look with a white trim along with their new Aston Martin sponsorship. These will not be the regular colors of the racer and will have only their normal livery shown when the car attends its first test in Barcelona next week.

Before the car was moved for a quick roll out onto the nearby Silverstone race circuit, the Red Bull press release informed Autoweek that there were very few changes for this season’s car.

“New bodywork regulations always dominate the news cycle in the launch season, but 2018 has a bigger acreage of change than most years with the introduction of the halo and the new exclusion zones on the rear of the car that effectively remove shark fins, monkey seats and T-wings, Some years it’s difficult for the casual viewer to differentiate the new car from the old: that isn’t going to be a problem this time around,” Red Bull Racing stated in their press release. “That said, the technical regulations haven’t changed hugely for 2018. Installing the halo has been a challenge, mostly in building a chassis strong enough to accommodate it and pass a brutal homologation test. But the rest of the regs have been comparatively stable. That’s the primary reason we’re able to launch earlier than usual.”

Returning for the second year in a row are the combination of Daniel Ricciardo and his Dutch teammate, Max Verstappen. Both drivers did a great job for the team last season, winning three Grands Prix and finishing third in the Constructors’ Championship. The team feels that if their Renault engine (badged as a Tag Heuer on the car) can improve, then the chances of taking on the top two teams can become very realistic.

I liked the new look, even if it is merely for the launch. Over the last few years years Red Bull has been the best of the rest. Will be interesting to see whether they can close in on the front of the grid, or is the pack catching up to them.