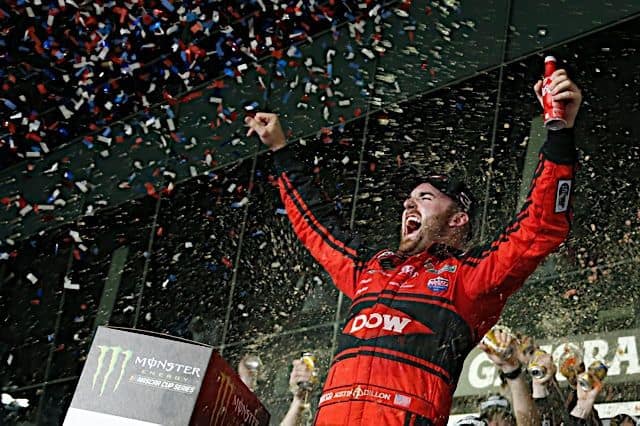 Despite seeing nearly half of the field crashing out of the event, and a first time winner in Austin Dillon,  the excitement was not good enough to save the Daytona 500  from some of the worst television ratings in the last 10 seasons.

The Daytona 500, which was televised by FOX Sports, earned an overnight rating of 5.1 , which was down from last season by 22% and 6.1% the previous year.

The numbers for the Great American Race were similar to what the broadcast of the 2017 Folds of Honor QuikTrip 500 earned at Atlanta Motor Speedway last year, the site of this weekend’s Monster Energy NASCAR Cup Series event.

TV ratings for the Daytona 500 broadcast have been declining for some time now and have failed to crack even a decent rating — such as a 7.0 — as of late.

One possible reason for the lower numbers this year may be due in large part to the competition faced by the Pyeongchang 2018 Winter Olympic Games. For comparison, the last time the Daytona 500 faced competition with the Winter Olympic Games was in 2014. That particular event earned a rating of 5.6 after enduring a six-hour rain delay, which pushed the race opposite to the closing ceremony. The closing ceremony ended up with a huge audience of 9.5 in 2014; compare that to this past Sunday in which the winter games earned only a 4.1.

One key storyline for the race this year was the final NASCAR start for Danica Patrick, who generated a huge following five years ago when she ran the Daytona 500 for the first time. Her status helped draw a 10.0 overnight, which was the highest since NASCAR’s heyday in 2000. That was the only time Patrick earned a top-10 finish in this prestigious event.

Even with smaller-than-expected ratings, the race is still in a good spot to finish as one of the top FOX Sports programs since the network covered the NFC Championship football game between the Philadelphia Eagles and the Minnesota Vikings.

I quit watching after the first “Boogity”. Fox, I implore you! Get rid of those chuckle heads and get someone with talent.

I do not see how you blame the Winter Olympics impacting the race ratings and then say that the Olympics ratings were 4.1 Interested race fans are going to watch it regardless of the competition. They The Olympics is just a strawman excuse just like the supposed NFL impact decried about each fall. Maybe there is just that many people who no longer have interest in “the Great American Race’ but no one wants to admit that I guess.

Have to wave the BS flag on this: “One key storyline for the race this year was the final NASCAR start for Danica Patrick, who generated a huge following five years ago when she ran the Daytona 500 for the first time. Her status helped draw a 10.0 overnight, which was the highest since NASCAR’s heyday in 2000.”

This sounds like fake news offered up as a fanboi’s personal opinion not based on any real data. If that “stat” had any real merit then why didn’t this huge fanbase turnout to say goodbye? Guess they were tired of her hype too.

Probably not going to get better this year. But I’m willing to be proven wrong.

Absolutely! I want to re-engage with this sport I used to love so much. But under the current product on the track and in the booth, I just can’t take it. I’ll peek in now and then and hope for the best, but I feel like nobody is listening. Fingers crossed.

Its hard to escape the fact that is basically….boring. You sit there for hours,and unless somebody wrecks nothing matters.
Before anybody gets excited let me explain what I mean. Back in days gone by, you watched, and things did matter. Your hero could go a lap down, and it almost took a miracle to recover from that. Or his engine blew up, or he wrecked. Anything. But you watched because these things cold happen at any time.
Today get a lap down, no problem. The “lucky dog” or a wave around can fix that. Nobody has mechanical problems anymore, now there is the occasional wreck.
Anyway you have 3 – 3 1/2 hours of cars droning around in a circle, then one last caution flag which shuffles the deck and produces a winner. And you think of the productive things you could ave been doing.

Hmmm… The ratings are down for “The Great American Race” and there are only 36 cars entered for Atlanta. What’s that tell you about the state of NA$CAR?

Tells me that without a charter you won’t make any money at Atlanta.