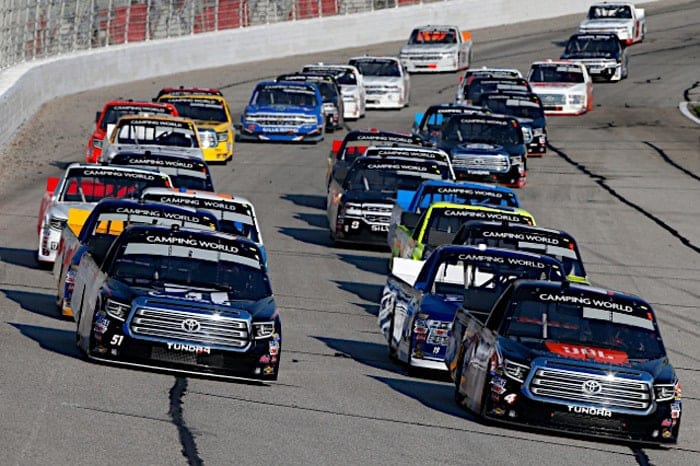 For Kyle Busch Motorsports, the merry-go-round in the No. 4 continues until Todd Gilliland can take the truck over full-time later this season. This week, owner Kyle Busch will drive the No. 4
Toyota with sponsorship from Cessna. He replaces David Gilliland, who won the pole at Daytona and was in position to win before being put in the wall late.

Young’s Motorsports will continue to field two trucks in Atlanta.  Tyler Young will make his season debut in the No. 20 Chevrolet, replacing Scott Lagasse Jr.

With John Hunter Nemechek making his XFINITY Series debut earlier in the day, Joe Nemechek moves over to the No. 8 for Atlanta. The No. 87 is not entered.

MB Motorsports has brought back Akinori Ogata to the series. This time, Ogata brings sponsorship to the team from Nisshinbo, a Japanese conglomerate that works in electronics, brakes for automobiles, chemicals and textiles.  Ogata has six career starts in the Camping World Truck Series with a best finish of 18th at Loudon in 2015.  He raced at Atlanta last year for Beaver Motorsports and finished 30th after developing an oil leak.

There are currently two teams that have not declared drivers for the weekend.  They are Jennifer Jo Cobb Racing’s No. 0 Chevrolet and the No. 1 Chevrolet for TJL Motorsports.  Cobb’s No. 0 did not enter Daytona, while the No. 1 had BJ McLeod behind the wheel.  McLeod failed to qualify the No. 1.

In addition to NEMCO Motorsports’ No. 87, the FDNY Racing No. 28 (shut down after Daytona) and Clay Greenfield’s No. 68 are not entered.