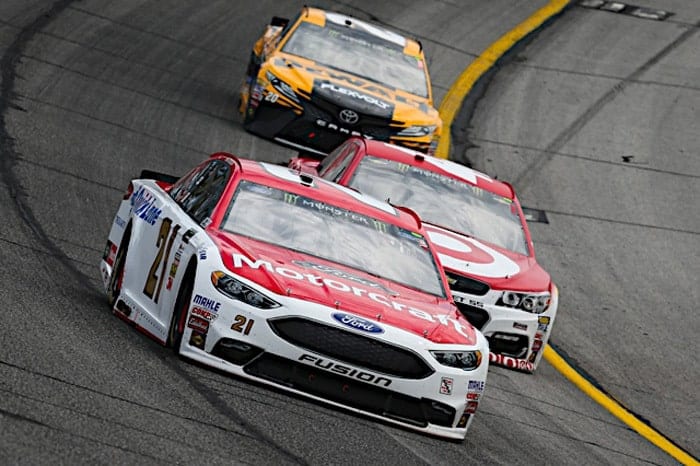 With only 40 entries for the Daytona 500, it was assumed that the entry list would be down for Atlanta.  For Sunday’s 500 mile race at Atlanta, only the 36 chartered teams are entered.  No one will fail to qualify.

That said, there are a couple of changes.  Premium Motorsports has changed their number from No. 7 back to No. 15 for this weekend.  Replacing Danica Patrick will be XFINITY Series regular Ross Chastain.

Justin Marks was originally listed as driving the No. 51 Chevrolet for Rick Ware Racing.  However, Marks’ deal with the team was only a one-race deal for Daytona.  Harrison Rhodes announced on his Twitter Thursday that he’ll be in the No. 51 this weekend.

Let’s go!! Pumped to make my @NASCAR Monster Energy Cup Series debut next weekend at @amsupdates with @RickWareRacing in the #51 car!

Rhodes has 84 career starts in the XFINITY Series, mostly with JD Motorsports with Gary Keller.  He has two career top 10 finishes, the best of which being a ninth in the Subway Firecracker 250 at Daytona in 2015.

Atlanta will also mark Cole Whitt‘s season debut in TriStar Motorsports’ No. 72 Chevrolet.  The entry list originally stated that LaJoie would be driving, but LaJoie had previously revealed on Twitter that he would not be in the car for Atlanta.

Really excited about this year’s schedule. Green races are @NASCAR with @TriStarRaceTeam , and the red races will be tentative with the Super Late model. pic.twitter.com/m2OKoxy2gN

There are also some new sponsors debuting this weekend.  Atlanta will be William Byron‘s first Cup race with Liberty University sponsorship, while Ryan Blaney‘s No. 12 will have DEX Imaging on it for the first time.  Ryan Newman will debut his Liberty National sponsorship as well.

So if we want 40 cars in the race does that mean NASCAR needs to issue/create four more charters?

Let’s have Bobby Allison enter in a Mustang and win and then not get credit again. That would put him 2 ahead of DW and drive him to more distraction.

Well we knew they only wanted the charter teams. Yet of the 36 one is in bankruptcy and another in essence sponsored by nascar.