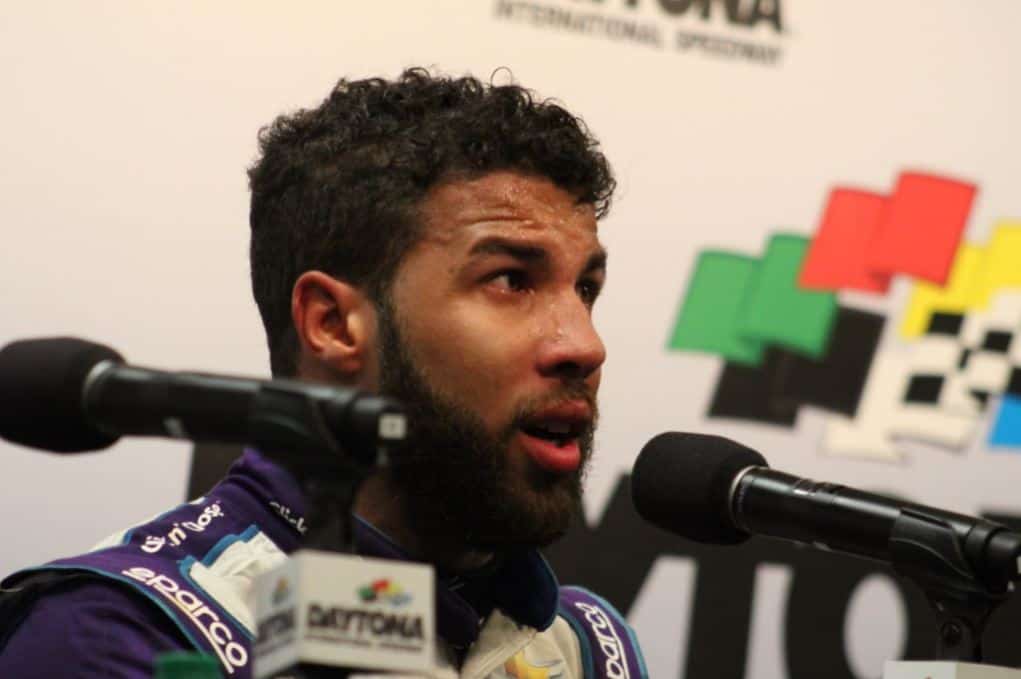 Darrell Wallace Jr. took the NASCAR world by storm this past Sunday. The Alabama native followed up his impressive run in last week’s Can-Am Duel to earn a runner-up finish in the Daytona 500, setting off plenty of mixed emotions for him and his family.

After the race, team co-owner and seven-time NASCAR champion Richard Petty could be seen rapidly walking on pit road, trying to find the newest driver of the No. 43 car. It was the best run for a Petty-owned machine since Aric Almirola won the Daytona July race back in 2014.

When Wallace walked into the media center, it was waterworks from that moment on. Ever since, NASCAR has been bombarded by outside media outlets attempting to find out exactly who Wallace is. At this point, he’s arguably getting more attention than Daytona 500 winner Austin Dillon, who brought the famed No. 3 Chevrolet back to Victory Lane in the Great American Race.

Can Wallace and Dillon keep this 2018 youth movement rolling for NASCAR? It’ll be neat to see whether one race turns into a season of fresh faces experiencing success.

Meanwhile, as busy as Daytona was for just about everyone who was there, Cole Custer‘s schedule stood out. Over the weekend, Custer was rumored to be making his Monster Energy NASCAR Cup Series debut at Las Vegas Motor Speedway in a few weeks with Rick Ware Racing. But is the XFINITY Series regular ready for the jump?

Find out in the latest edition of your fans questions answered: NASCAR Mailbox.

Q: Will Bubba Wallace’s second-place finish secure sponsorship for him and the No. 43 team? – William S., Wisconsin

A: The No. 43 Chevrolet entered the season with only nine of 36 races sold, which is definitely less than ideal. But with a run like Wallace had in the Daytona 500, Richard Petty Motorsports’ marketing department will certainly have an easier time convincing companies to align with the organization.

Wallace already got some good news this week, featuring this partnership for the next race at Atlanta Motor Speedway.

NEWS: The @NASCARRaceExp will be the primary partner of the No. 43 team and @BubbaWallace this weekend.

RPM had re-signed multiple companies entering 2018, including STP, the U.S. Air Force and Fresh From Florida. It’s just those sponsors only serve as the primary for a few select events.

But this Daytona runner-up finish should serve as a catalyst. On Tuesday, Sports Business Journal’s Adam Stern tweeted Smithfield Foods will return to RPM in 2018, sponsoring the No. 43 car in six contests. The company moved over to Stewart-Haas Racing this year with driver Aric Almirola, funding the entire season on the No. 10 car.

.@SmithfieldFoods EVP John Pauley tells SBJ that Smithfield will be a primary sponsor of @RPMotorsports for six races in 2018.

—Smithfield to let key grocery partners use the primary space.

The No. 43 team is focused on improving its performance this year, aligning with Richard Childress Racing to field Chevrolets instead of Fords. Already, they’ve succeeded. Wallace scored more stage points Sunday (four) than the No. 43 car’s entire 2017 season.

Now, with a driver determined to get the job done, RPM might have some extra funding coming its way. NASCAR has been pushing to get more sponsorship for Wallace since last year, going as far as helping him sign deals for multiple XFINITY and Truck series races in the hopes of securing a Cup ride for 2018.

Since that worked, the hope is that Wallace will continue to perform. However, he is unsure of what comes next after this impressive run at Daytona.

“The team we have behind us right now is so much fun, and knowing that we’re a smaller budget team, we have a lot of poise and a lot of attitude and just a lot of stuff to fight for this year,” Wallace said during his post-race press conference. “I’m really looking forward to Atlanta. Don’t know what the hell we’ll have there because it’s all new for us. I know this will carry over to Atlanta and be good.”

The ultimate test will come at Atlanta when the No. 43 team will have to perform well at an intermediate track. Sure, the media attention that has followed the Daytona 500 this past week is great. But what will get Wallace sponsorship dollars are solid, consistent performances that show he is not a fluke.

If this past weekend’s raw emotion out of Wallace doesn’t get a corporate partner to back him, I’m not quite sure what will.

A: This move is an interesting one by Stewart-Haas Racing. Early in the season, the team is already preparing for the future.

Should Custer officially compete with Rick Ware Racing at Las Vegas, it will likely be in a car prepared by SHR and one with Roush-Yates engines.

“I don’t know if that’s out yet or not,” Custer told Frontstretch when we asked him about the Rick Ware rumor Friday afternoon. However, FOX Sports and Larry McReynolds reported an official announcement was coming soon.

Will such a move pay off? Other teams have teamed with smaller organizations to run a Cup rookie, with mixed results. It’s either a rousing success or a painful process that’s a waste of the young driver’s time.

As an example, Joe Gibbs Racing put Joey Logano in the Hall of Fame Racing No. 96 car for a pair of races in 2008. But that didn’t work very well for either party. Two finishes of 32nd or worse did little to prepare the youngster for the Cup Series.

Can this pairing be different? You have Custer, who already has full XFINITY and Truck series seasons under his belt, more experienced as he heads to Cup.

In Custer’s first full XFINITY Series season, he scored more points on intermediate tracks than anyone else. Self-admittedly, he said he struggled on the plate tracks because the team just didn’t have time to prepare for those events. For short tracks, his biggest struggle was getting used to the cars.

But once Homestead-Miami Speedway came along, Custer whipped the field. The No. 00 car led 182 of 200 laps, winning by an astonishing 15 seconds.

At that point, it was clear he had indeed settled into the XFINITY Series.

Now, as SHR looks to move Custer up, this will be a great test to see if he will be ready for the Cup Series next year or if more time is needed to adjust to the larger, more powerful stock cars. It appears as if he will finagle his way into SHR’s four-car stable sooner rather than later. That will likely mean Kurt Busch or Clint Bowyer could be on the hot seat, with each driver’s contract reportedly being up for renewal at season’s end.

Custer certainly needs to audition for a Cup ride, and LVMS is a good place for him to do that given his stats from last year. He concluded the season with an average finish of 13.3, respectable numbers for a rookie, with seven top fives and 19 top 10s to slap onto his resume.

If Custer performs well, expect to see him in a Cup car more often throughout the rest of the year. That makes him an early option for the 2019 Sunoco Rookie of the Year award.

The question is who would you be investing your money in, the driver or the car? Based on past performance the car isn’t encouraging, and without that the driver is nothing. So aside from social pressure, which admittedly is a factor, I wouldn’t expect to see a rush to sponsor the 43 based on one restrictor plate race.

Nope, no new rush of sponsors for bubba. He couldn’t win in xfinity in eighty tries And anyone can get lucky at Daytona. Reality starts now. Dillon and Wallace are done for the season.

Kleenex – that would be the perfect sponsor for Bubba.

Yes he will because Nascar is paying for his ride now. They will keep finding sponsors and send them his way. Petty was going under…Nascar can’t lose Petty right now so, they made a deal and funded the team as long as Bubba drives. Total joke. He will not last. There just isn’t enough talent in him. Nascar is searching for ANY additional fan base they can get. You really think that Bubba Wallace is going to save Nascar….LOL it’s over. I have never seen such a publicity push for a middle of the road driver at best.

Wasn’t too long ago that people were saying the same thing about Danica. Some things never change.

I have heard this prediction years ago. They are still here and team primary owner is a billionare. So if they go under it will be a decision not because of lack of resources
He has above average stats in all the series he has competed in .