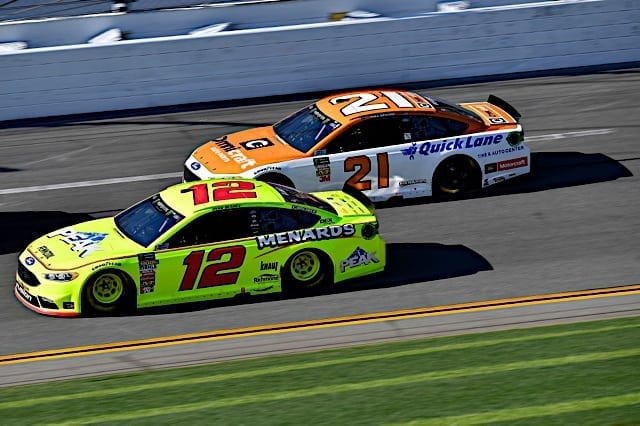 The Monster Energy NASCAR Cup Series was in Daytona this weekend for the 60th running for the Daytona 500. As the sun rose Sunday morning, it ushered in the 2018 season with one of the most anticipated Great American Races in recent memory. The field was filled with a good mix of young drivers challenging the old guard of Kevin Harvick, Jimmie Johnson, and defending winner Kurt Busch.

In the end, a new star was born.

20 years after Dale Earnhardt won his first and only Daytona 500, Austin Dillon returned the No. 3 to Victory Lane for the second time in his career and first at the 2.5-mile superspeedway. Dillon made a controversial move en route to victory, but as he said post-race, “the last lap of the Daytona 500, you just don’t lift.”

Now that the stress of the Great American Race is in the past, it’s time to focus on the remaining 35 races of the MENCS season. What did the Daytona 500 do to our driver rankings? Find out below.

It was a heartbreaker at the end of the day for Blaney, who led 118 of 207 laps. He did everything he needed to do yesterday except lead the final lap. Though not a victory, he still finished the race in seventh and sits in the point lead as the series exits Daytona.

First off I can’t thank the whole 12 team and Menards enough for what they do. That was an incredibly fun speedweek. Probably the hardest I’ve ever driven. Shame we came up short. Want to end with an apology to the 41 group. Just racing hard in a bad spot and I’m to blame.

Now, as the drivers head to Atlanta this weekend, Blaney’s dominant performance at Daytona puts him at the top of the list. That’s even though Daytona is a different beast than pretty much every track on the schedule.

This next race serves as an early test for him. Team Penske won at Atlanta last season with Brad Keselowski, but in two starts at the 1.5-mile oval, Blaney has an average finish of 21.5. Though the results haven’t come there yet, Blaney finds himself with a new team and fresh hope to improve his on-track performance in 2018.

Dillon earned his second career victory in the Daytona 500 Sunday. Being in the right place at the right time allowed the driver of the storied No. 3 to win what may forever be the biggest victory of his career. Astonishingly, he has led just a combined three laps in two career Cup wins. But Sunday’s shocking final moments surely boosted a race team who feels their 2018 future is bright.

Daytona has a way of just making memories. This is one I’ll never forget. #Daytona500Champion#NASCAR #DAYTONA500 pic.twitter.com/C4xhhQOdoG

With the new Chevrolet Camaro ZL1, RCR has the opportunity to be on the same playing field as the rest of their fellow teams. Both Dillon and teammate Ryan Newman are expected to be competitive this weekend, too. In five previous starts at Atlanta Motor Speedway, Dillon’s best finish was eighth in 2016. Can he follow up Daytona with a top-10 run to prove the No. 3 has come to play in 2018?

Busch was so close to earning his second straight Daytona 500 victory. However, a crash on the final lap of the scheduled distance ended that opportunity. He still led the third-most laps in the Daytona 500 and won the first stage, putting him 16th in points.

Racing has its moments, I thought the magic was going to happen again. Back to back wins in the Daytona 500 was something I believed we could pull off today. So close. Big thanks to @StewartHaasRcng @MonsterEnergy and my whole 41 team. Atlanta we are coming for you. #kb41

Atlanta has been very good to Busch in his career. He has 26 starts with a victory in three of those and an average finish of 15.6. The driver of the No. 41 started on the pole for the 2016 Folds of Honor QuikTrip 500 after his brother Kyle’s time was disallowed, the only time Busch has started first in an Atlanta race.

Hamlin had a lot to overcome Sunday and overcome he did. He was penalized early in the race for his crew servicing the car outside of the pit box, resulting in a one-lap penalty. But unlike his teammates, who also faced adversity, he was able to complete the Daytona 500 on the lead lap. Hamlin and Darrell Wallace Jr. both battled for second place in the end, with Hamlin ultimately finishing third.

What a comeback for our @FedEx team. We gave ourselves a shot to win on the final restart and lost the coin flip. Really happy for @austindillon3 and team. And for anyone looking for a reason to hate, the 43 came down on ME and cut my tire at the line which is why we wrecked.

Wallace had to be one of the biggest feel-good stories walking away from Daytona last weekend. He wound up second in his first Daytona 500 in only his fifth series start. He currently sits fourth in the Monster Energy NASCAR Cup Series points standings.

I'm still emotional… Get me out of Daytona!??

With the series heading to Atlanta Motor Speedway this weekend, Wallace will embark on one of many firsts this season. Though he’s never run the 1.5-mile oval in Cup, Wallace does have three XFINITY Series starts at the track. Last season, he earned his track-best finish of sixth in the Rinnai 250. His average finish at this facility is a respectable 12th.

After a strong Daytona 500, it’s easy to believe Wallace has a chance of bringing Richard Petty Motorsports back to Victory Lane for the first time since 2014. We’ll see if that moment comes as early as Sunday.

The Daytona 500 was going well for Chase Elliott — key word, was — until he crashed hard into the outside wall during the first of many multi-car wrecks. Elliott was showing his hand at blocking and running in the pack. He even looked to have one of the strongest cars in the field. But it wasn’t meant to be for the No. 9 team as Elliott was unable to continue after his lap 101 wreck.

Elliott’s past performances at Atlanta put him as one of the favorites heading into a weekend of racing at his home track. Elliott finished in the top 10 in both of his prior career starts here and Sunday shouldn’t be any different. He has an average finish of 6.5 which means the Dawsonville Pool Hall might need to get the siren ready.

Like Elliott, Keselowski was also involved in that lap 101 melee. A pre-race favorite to win the 500, Keselowski’s race came to a much earlier ending than expected.

Super bummed for the #2crew

Not a lot that could’ve been done different about the wreck but I should have saved the car on the apron and been able to continue.

Thank you for all the support fans.
Our day will come…

The defending Folds of Honor QuikTrip 500 winner has seen his ups and downs at Atlanta. In March 2010, Carl Edwards made contact with Keselowski which sent the No. 12 car over on its lid and into the outside wall, driver’s side first. Fast forward seven years later and Keselowski earned his first and only victory in the Cup Series at Atlanta. Can he become a repeat winner at this 1.5-mile oval?

Almirola came tantalizingly close to fulfilling his dream of winning the Daytona 500. But in an instant, that dream was crushed as he spun off the front end of eventual winner Dillon’s front bumper. After such a heartbreaker, his season could go either way. But the speed Stewart-Haas Racing showed Sunday could be proof that the No. 10 car is headed in the right direction.

Laid in bed replaying the last lap a million times in my head last night. Nothing I’d change. Woke up this morning with a new focus. Trying to win the next 35 races and run for a championship.@SmithfieldBrand @FordPerformance @StewartHaasRcng

In seven starts at Atlanta, Almirola has a best finish of ninth in 2014. Six of those seven starts at Atlanta came with Richard Petty Motorsports, but a change could be just what Almirola needed to give his career a second wind. His average finish at the track is 19th, but he’s running equipment that’s far stronger than the RPM Ford he used to pilot.

In order to have success in NASCAR, you have to have the perfect combination of good team, good car, good driver. Menard and Wood Brothers Racing might just be that perfect combo. After showing a lot more speed than many anticipated at Daytona, walking away with a solid eighth-place result, Menard has to be discussed this weekend in Atlanta.

Menard has 16 starts in the MENCS at this track with a best finish of fifth in 2010. He has an average result of 20th in Atlanta and has shown some consistency on intermediate tracks in the past. A faster car with the Wood Brothers could result in Menard’s second career victory and the Wood Brothers’ 100th win in the series.

The best thing that came out of Speedweeks for Johnson had to be when it ended. The seven-time champion wrecked three cars during the week, including in the Daytona 500. He never really competed up front in any of his races, but perhaps the silver lining for Johnson is that he’s headed to a style of track that has been bread and butter for the No. 48 team.

Not the start to the season I was looking for but one heck of a start for @nascar. Congrats to @austindillon3 and all #3 fans out there. ?

Johnson has five victories at Atlanta Motor Speedway and an average finish of 11th. His past at the track surely overshadows his performance at Daytona.

However, if the No. 48 team doesn’t get back into a groove soon, it will be a question of if they ever will – especially after an uncharacteristically lackluster showing in 2017.