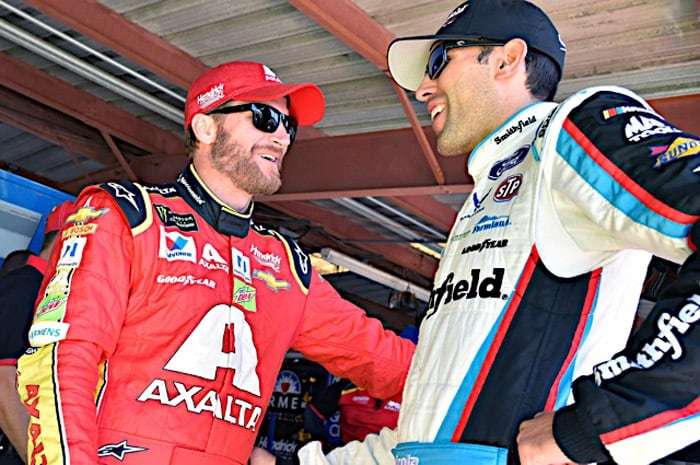 This fact isn’t news to those who have been paying attention to the new driver of the No. 10. But for so many, Daytona was the first time Almirola made an appearance on the radar.

Remember, Almirola’s only Cup win to date came at Daytona in 2014. He did win two plate races in a row in 2016-2017 for Biagi-Denbeste Racing in the XFINITY Series, one apiece at Daytona and Talladega. But most probably remember him for this ugly Kansas wreck last May, causing him to miss seven races with a fractured vertebrae.

But now, Almirola has moved into top-tier equipment with Stewart-Haas Racing. He’s going to be one of those plate racers always in the hunt unless he gets taken out by someone else.

Restrictor-plate racing is not a skill every driver has in spades (looking at you, Jimmie Johnson), and the best plate drivers aren’t necessarily the ones winning every week everywhere else. But if you need a driver on your fantasy team or office pool for those tracks, Almirola is a pretty solid choice.

2. Rubbin’s still racin’, or at least people will talk about it

Austin Dillon’s race-winning move Sunday was not without controversy. Was it OK?  It can be argued that anything goes when it comes to racing for a win. Unfortunately, there is no such thing as a bump-and-run on a superspeedway. The counterargument is that makes it a dump-and-run,  a dirty move no matter where you race.

Superspeedway crashes look scary, and they are. The last time a Cup driver didn’t walk away from a crash, it was at Daytona, and the sport has never been the same.

At the same time, it’s hard to argue that a move like Dillon’s doesn’t make for an exciting ending, whether it’s right or wrong, and that’s what people remember.  NASCAR desperately needs fans to be talking about exactly what we saw on Sunday. Dirty move but good for the sport? Perhaps.

Note to Dillon, though: Don’t say how much you hate it for the team you just wrecked because you don’t hate it for a second. The No. 10 team knows you regret nothing. Right or wrong, you did what it takes to win. Own that.

3. There’s still a lot of sentiment when the No. 3 is involved

From my perspective, it sure seemed like a lot of fans were good with Dillon’s pass for the win. After all, he returned the No. 3 to Victory Lane at Daytona 20 years after Dale Earnhardt finally pulled off the win he wanted more than any other.

Seeing that No. 3 car cross under the checkered flag was at once a reminder of the days when Earnhardt made Daytona his personal playground. But it also keyed up memories of that time he never made it back to the checkers. Dale Earnhardt Jr. tweeted his support for Dillon’s move after the race.

.@austindillon3 is a truck champion, an xfinity champion, and now a #DAYTONA500 champion. He did all this with his family team. Knowing how proud Richard Childress must be makes me smile.

There was a lot to like about the story, but it’s also a reminder that a double standard exists in NASCAR. It wasn’t all that long ago when Denny Hamlin put Chase Elliott in the wall at Martinsville for the victory, and a lot of people weren’t too happy about that.  Maybe the “not OK” group was just more vocal that weekend and the “totally good” crowd got louder this time. Hopefully, that’s the case, because the other option is a little ugly.

NASCAR introduced yet another restrictor plate package this season in hopes of, well, something. Not much changed, though. What they needed was to find a way to bring back the feeling that the lead was the last place you wanted to be at the white-flag lap, because you were going to get freight-trained.

To be fair, we still don’t really know if that’s the case; Almirola got dumped before he could get freight-trained. It didn’t really look as though the racing was significantly different though.

While we’re on the subject of plate racing, NASCAR really needs to quit penalizing NASCAR XFINITY teams for pushing each other.  That’s how you get to the front and win races. If wrecking someone to win is OK, how can pushing a driver to the front to set up a clean move to pass not be?

5. We still don’t know much

The real NASCAR season starts this weekend in Atlanta. The Daytona 500 is its own animal, NASCAR’s Super Bowl. The only fact that makes it anything like the next 35 races is that there are the same amount of points at the end.

Instead, we must wait to see who’s on their game and who’s fallen back. It’s not even that likely the biggest question—whether Chevrolet will bounce back after being behind as a group late last year—will be answered definitively in the next few weeks.

The Toyota camp as a whole didn’t find whatever it was that made them so much better than the field until last summer. Preliminary numbers at least suggest that the Chevrolets will be closer to equal this year, which is good for the sport. No fan wants to believe their guy is at a disadvantage before his car rolls off the hauler.

What we don’t know about NASCAR in the A.J. (After Junior) era is just about everything. Can anyone fill the shoes of Earnhardt, a driver who had so much attached to him because of the untimely loss of his father, a racing hero to so many? Is it fair to ask someone to do that — or to ask fans to pick someone new and simply carry on? It’s a strange new world, one without an Earnhardt or a Petty contending for wins. Can the sport stop searching for its lost youth and carry fans into the next era?

You say that it’s, “hard to argue that a move like Dillon’s doesn’t make for an exciting ending.”

There, that wasn’t hard at all.

And anybody that thinks it will bring new fans to the sport if fooling themselves. The only people who like that sort of thing are already there.