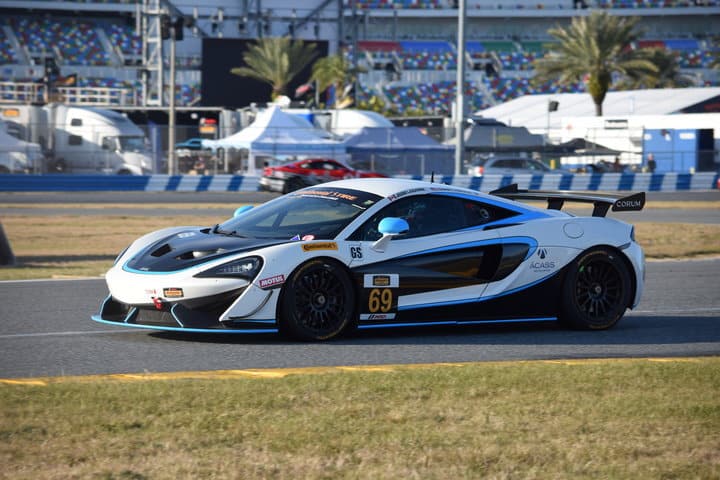 On Tuesday, Motorsport in Action’s Jesse Lazare was fastest overall in Day No. 1 of testing for IMSA Continental Tire SportsCar Challenge teams at Sebring International Raceway.  Lazare’s lap of 133.619 seconds (100.764 mph) was a little more than two seconds off of last year’s pole time.

Lazare’s aforementioned lap in his No. 69 McLaren 570S GT4 topped the charts in the morning session.  The lap was more than half a second faster than the Ford Mustang GT4 of VOLT Racing’s Trent Hindman.  Indy Dontje was third quickest in the No. 57 Winward Racing/HTP Motorsport Mercedes, followed by Lazare again in Motorsport in Action’s part-time No. 68 McLaren.  Compass Racing’s Paul Holton rounded out the top five in another McLaren.

In the afternoon session, Dontje put the No. 57 Mercedes-AMG GT4 on top of the charts with a lap of 133.892 seconds (100.559 mph).  The time was nearly a half-second slower than Alex Premat in the No. 92 Mercedes for Ramsey Racing.  Hindman was third quickest, followed by Holton.  Multimatic Motorsports’ Patrick Gallagher was fifth quickest, over a second off of Dontje’s pace.

Outside of the top five, other drivers were using Tuesday to familiarize themselves with the 3.74-mile bumpy circuit.  Chase Briscoe, who will be making his XFINITY Series debut for Roush Fenway Racing on Saturday, was in the No. 15 Ford Mustang GT4, sharing with past champion Scott Maxwell.  Maxwell, who is the defending champion of the Sebring 120 (along with Jade Buford) allowed Briscoe to turn in all of the laps on Tuesday so that he can learn the notoriously tricky track.  In the second session, Briscoe’s best time was 12th quickest, 2.7 seconds off the pace.

CTSC teams will have one more test session on Wednesday.  It will begin at 2 p.m. and run for three hours.