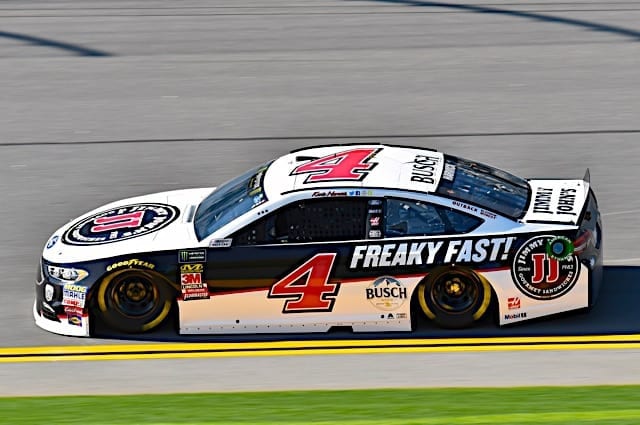 Who will win the first intermediate track race of the season?

Now that Daytona International Speedway is over, it’s time to throw everything we learned from it in a drawer and forget about it until Talladega Superspeedway in two months.

This weekend at Atlanta Motor Speedway, there will be a lot of drivers who could conceivably break through and win the race. The track itself, if last year was any indication, favors long green-flag runs, and the old surface chews tires to the point where everybody last year were pitting 20 laps shy of their fuel window.

Last year, Kevin Harvick put on the most dominant performance of the entire season, leading 450 miles and only giving up the lead during green-flag pit stops until the last caution of the day. But a speeding penalty on the final pit stop of the day knocked him out of contention, and he ended up settling for just eighth on a day during which he led 292 laps.

But that was a year ago. The Fords looked really strong in the spring before Toyota started to find speed in its then-new Camry. In the 10 1.5-mile Monster Energy NASCAR Cup Series races after Atlanta last year, Martin Truex Jr. was dominant, with the most overall points scored, seven wins, nine top fives and 10 top 10s. His average finish in that time span was second.

To be fair to Harvick, however, he won at Texas Motor Speedway and had nine top 10s in that same time span. It’s gearing up to be a battle between Truex and Harvick this weekend.

The new Camaro will also have its first big test. This is Chase Elliott‘s home race and a track where he has finished eighth and fifth in his only two Cup starts. Plus, on the Hendrick Motorsports side, it’s never a surprise when Jimmie Johnson performs at a mile-and-a-half, especially Atlanta.

And finally, there’s defending race winner Brad Keselowski, who won last year after a close duel with Kyle Larson in the closing laps. He’s riding a streak of three straight top-10 finishes at Atlanta, and he has a decent shot at continuing that streak on Sunday.

Will Richard Childress Racing and Richard Petty Motorsports come back to earth?

Richard Childress Racing started the season off with a bang, winning the Daytona 500 and bringing the No. 3 car back to Victory Lane at Daytona. But now, it is going to need to turn around and show some speed this weekend if it wants to become a legitimate championship contender.

Austin Dillon won last year’s Coca-Cola 600 at Charlotte Motor Speedway off fuel strategy, but that was the only mile-and-a-half top 10 he had all year. His best finish at Atlanta was 11th back in 2016, which was also his only lead-lap finish at the track.

Veteran Ryan Newman‘s only top 10 at a mile-and-a-half last season was the 600 as well, when he finished ninth. RCR just hasn’t had a lot of speed on the 1.5-miletracks, something that is pretty crucial to have since there are plenty of those races on the calendar every season.

Then there’s Daytona 500 runner-up Darrell Wallace Jr. Richard Petty Motorsports struggled a lot last season with Ford, but just how much more speed will a close alliance with RCR bring in comparison to being fourth on the totem pole at Ford?

Will there be any weepers on Sunday?

Last season, NASCAR got incredibly lucky with the weather; no Cup race was curtailed early due to rain, and only the spring Bristol Motor Speedway race was delayed to the next day. A new rule change, which dictated that a race is official after stage two and not at halfway, never had to come into effect.

This weekend, though, looks like it’ll be a long one, thanks to rain.

The current forecast calls for scattered showers from Sunday morning to Monday afternoon, with no precipitation after 2 p.m. ET.  The problem isn’t drying the surface of the track; instead, it’s with the weepers.

Atlanta has one of the oldest surfaces in NASCAR, which leads to some great, tire-grinding racing but also has its drawbacks. A weeper is when water seeps out from under the track surface, which both is hard to detect at times for the Air Titans and leads to longer delays . Imagine wiping water off the floor and walking away from it, before coming back an hour later and finding more to clean. It’s particularly prevalent at racetracks with old asphalt, like a couple of years ago where it took hours to dry Texas Motor Speedway right before its repave, even though it hadn’t rained in hours.

Drivers ask all the time why racetrack owners want to repave racetracks. After all, it’s pretty expensive, and it leads to often-boring racing for both the fans and the drivers. But if Speedway Motorsports Inc. had followed through with its initial plan to repave Atlanta after last year’s race, this wouldn’t be that bad of a problem, and we might have been able to get the race in on Sunday. Instead, it’s looking like it may be a Monday evening race the week before the western tour, which is going to be a logistical nightmare.

Will Cup drivers dominate on Saturday?

There’s one driver on the mind of series regulars entering the XFINITY Series race at Atlanta: Kevin Harvick.

He’s won four races at Atlanta, is the only Cup regular in the field who made that series playoffs last year and almost won this race last year with a then-brand-new race team. In 16 starts at Atlanta, he’s led over 100 laps in five of them and has finished in the top five in 10 of the last 11. He’s also the only former Atlanta winner in the field, to boot.

Harvick isn’t the only Cup interloper. It’s generally interesting to watch Kyle Busch in the Camping World Truck Series, where he’ll run Saturday. He’s the favorite in this race simply because he’s Kyle Busch in a field that consists of:

He also challenged Christopher Bell for the win there last year before a flat tire on a restart knocked him out of contention. If Busch is determined to come in and make up for that loss with a win, it’ll be hard for anybody to stop him.