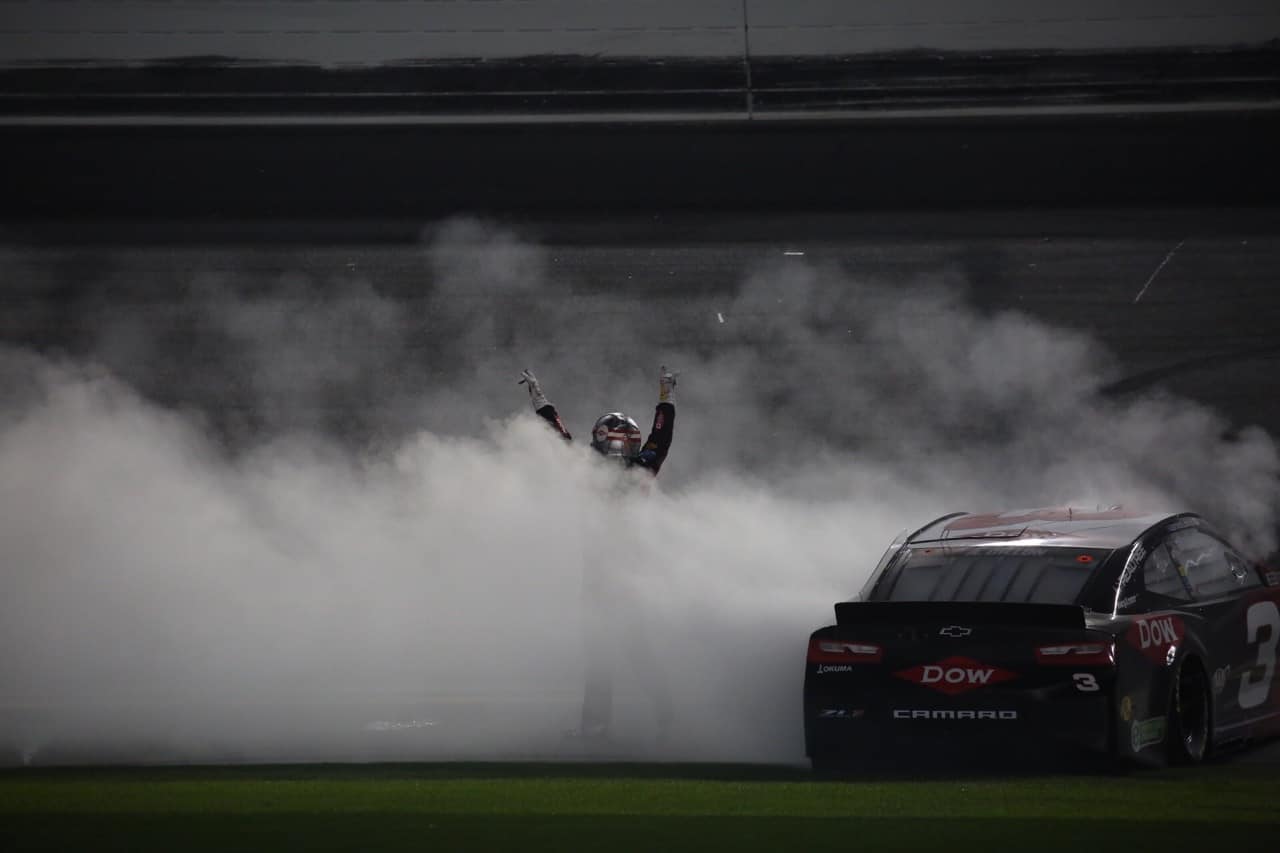 Austin Dillon’s Daytona 500 triumph was his second in his Monster Energy NASCAR Cup Series career, but some people have said he hasn’t won a real race, as his 2017 Coca-Cola 600 win was on fuel mileage and this past weekend was a restrictor plate event. Does he have to win a so-called normal Cup race to be considered legit?

Davey Segal: Austin Dillon doesn’t need another win to be considered legit. People in the garage and fans would look at him with a little more respect if he were to go out at, say, Texas Motor Speedway and win, but still, no. Any Daytona 500 winner is legit. Yes, even Derrike Cope. The Cup Series ain’t easy; any win is a huge accomplishment.

Michael Finley: Did they award points to the driver? Did they find the car beforehand and afterward to be legal? Did they award the driver a trophy and the prize money? If the answer is all of the above, then a Cup race winner is a Cup race winner. The only time that’s a little iffy are rainouts, which Dillon hasn’t won because of yet. That said, imagine a year ago the Las Vegas odds on both Dillon and Ricky Stenhouse Jr. having two full-distance Cup wins before Chase Elliott.

Christian Koelle: His victory on Sunday made him legit. People tend to overlook that Dillon is the only driver in the series who can win the triple crown of championships, and he’s had a successful career so far in the series with two victories. A win is a win, and it qualifies him for the playoffs, end of story.

Amy Henderson: A win is a win.  A fuel mileage win is as legit as any other; it means the team played the best strategy, which is exactly how every race is won.  Same goes for a win in a weather-shortened race; anyone else could have employed the same strategy and come out on top, but they didn’t.  Plate racing is a specialized skill, no doubt.  There is a certain element of crapshoot at Daytona International Speedway and Talladega Superspeedway because not everyone is equally good at it and bad things happen. But are the wins legit?  Yes.  We don’t need to be carving Dillon’s Hall of Fame plaque just yet, but his wins are as real as any other race when the winning car was legal.

Darrell Wallace Jr.’s second-place finish and reaction in the media center afterward garnered headlines as Speedweeks came to a close. Out of all the young guns in the sport, does he have the most potential to become a superstar on and off the track?

John Haverlin: Wallace certainly has the potential to be a superstar on and off the track. It’s going to take some time, though. He’s in a car that won’t dominate the field this season, and he’s bound to have some disastrous races this year, as all rookies do. However, being the only black driver in Cup will go a long way in his rise to fame. NASCAR has been desperately seeking racial diversity for a long time, and Wallace is the best non-white driver Cup has seen since Juan Pablo Montoya. He won’t be a superstar this year, but I expect him to be a household name within the next five years.

Finley: Yes. He actually reminds me a bit of Dale Earnhardt Jr. in that there’s a lot of legitimacy and love for the sport in just about everything he does and says. Everything out of his mouth sounds like it’s genuine and from the heart. That’s not to say that it isn’t for others, but a lot of times drivers fall back on being bland brand spokesmen. Wallace doesn’t — or at least hasn’t yet.

Matt McLaughlin: The Magic 8 ball says, “Uncertain, try again later.” Sure, the potential is there, but people need to keep their expectations in check. RPM hasn’t been much of a title contender in some time now, and Wallace is still a rookie. If Wallace can run well enough that he is thought of as a talented NASCAR driver rather than a talented black NASCAR driver, half the battle is won.

Mark Howell: I’m tired of folks playing up race as a factor in Wallace’s career accomplishments. That said, these politically and racially contentious times speak volumes to his emergence as a story coming out of Daytona. His openness, sense of humor and skill behind the wheel have endeared him to our sport. Those same qualities will enable Wallace to become a respected and recognized face of 21st-century NASCAR. An added perk: the resurgence of Richard Petty Motorsports as a respected and recognized modern-day operation.

The XFINITY Series race ended with the closest finish ever in NASCAR history, but an additional headline that came out of the event was the penalization of Chase Elliott and Elliott Sadler for locking bumpers while drafting. Do you agree with this rule?

Mike Neff: Similar to the yellow line rule, the bumper locking rule needs to be enforced consistently if the fans are going to get behind it. We constantly see drivers with their bumpers together for extended periods. There isn’t any definition of time that results in an infraction. It is always subjective, just as the yellow line rule seems to be. The design of the cars will result in overheating if they spend too much time together. Let them lock onto each other for as long as they want. It makes for more exciting racing.

Koelle: Rewind to 2013 when Kyle Larson flew through the catch fence at Daytona, and you’ll find exactly why this rule was put into place. This rule is sternly addressed in drivers meetings at both Daytona and Talladega, which means NASCAR believes it’s for the safety of the fans and the competitors. NASCAR did exactly what it needed to do.

Finley: Any rule that tells a driver to stop racing as effectively on-course as they can is incredibly stupid, especially one that is both so inconsistently enforced and as hard-to-police as this rule is. The fact this has been going on for five years now in both the Camping World Truck Series and XFINITY is pretty ridiculous. Either NASCAR needs to throw this rule away or change the aero package to effectively remove tandems, like in Cup.

McLaughlin: Just when you think NASCAR couldn’t possibly do anything more contemptibly stupid, it always finds a way to pull another rabbit out of the hat and go Fatal Attraction on it. The fact that, with the new aero package, bump drafting actually slows down the two cars involved seemed lost on them. I’ll leave it to you to decide if I agree with this rule.

This weekend at Atlanta Motor Speedway, Saturday will feature a doubleheader with Trucks and XFINITY. Should more tracks opt for more of a bang-for-your-buck Friday or Saturday with doubleheaders?

Phil Allaway: Absolutely. New Hampshire Motor Speedway crams its race weekends full of action that keeps fans satisfied, assuming that the drivers don’t spend all day wrecking.  I asked Kyle Busch about it last fall; he said he thinks that it’s a good idea, but only at certain venues.  It’s not possible at a place like Talladega, for instance.

Neff: No, no, no. It isn’t about bang-for-your-buck, it’s about entertainment from the series. The Truck Series was designed to run on the local short tracks where NASCAR racing began. Then NASCAR ran the series at Daytona, and it was ruined forever. The fact that nearly all of the races are companion events is driven by the desire to have the races on live television. In reality, it would best serve the sport to move them to standalone events and have them streamed on FansChoice.tv or one of the streaming apps of the TV partners. Going to more local short tracks throughout the eastern portion of the United States, with one West Coast swing, would be the ideal option for the series.

Howell: While it’s great for fans to get more for their money by way of doubleheaders, it’s good for the sport to have Truck and XFINITY races function as primarily standalone events. I know doubleheaders allow fans to see more action and that they often make it easier for teams to platoon their crew members, but those weekends are always overshadowed by the Cup races. Case in point: last weekend. A good NCWTS event and the closest finish in NASCAR history in the XFINITY race, and all the attention still shifted over to the Cup side of the weekend. Does NASCAR want to satisfy fans or solidify its lower-tier touring divisions? Doubleheader weekends with the Cup Series won’t allow for both.

Henderson: I love the idea of having Trucks and XFNITY on the same day; that’s a great value for fans.  Will it still be overshadowed by the Cup race? Yes, but that won’t change no matter what format you use.  I see potential issues when weather comes into play (who’s pushed to Monday if the first race is delayed?), but overall I like it. What I’d really like to see is a Cup/IndyCar weekend.  That would be a great way to maximize fan interest.

Austin Dillon and members of his No. 3 Daytona 500-winning team got tattoos on their backsides during their celebration into the night. Would you ever get permanent ink on your backside, and if so, what would you get and why?

Segal: Don’t tell my mom, but of course I would! The real question is what would I get? Possibly a Spartan head to rep my soon-to-be alma mater, possibly a strip of bacon (not kosher, I know). Heck, maybe a checkered flag. NO, WAIT, I GOT IT: the poop emoji. Winner winner, chicken dinner.

Neff: Stay tuned! During the champion’s breakfast on Monday at Daytona, Dillon said he would pay for the tattoo if anyone wanted to get a Wolfpack tattoo. That tattoo is the signature logo that is shared by most of the members of Dillon’s tight circle of friends. I told him that I would do it if he’d pay for it and hopefully put it on his Barn Life show. If everything can be worked out, it will be on social media in the near future.

Finley: Maybe. If I’d get one, I’d probably just get a kiss.

Howell: Don’t know if I can get behind this issue. Do existing scars and/or cysts count? Without making a total ass of myself, I’d have to say no.

Henderson: The original, off-the-cuff answer that popped into my head was possibly the best snarky comment I’ve ever even thought, but it’s also about 4,000 percent unprintable, so I’ll just leave it to your imagination.

Haverlin: If I ever got permanent ink on my backside, it’d probably be because I don’t remember what my buddies and I were doing the night before.

Allaway: Hecks to the no. Last thing I need to do in an intimate situation is explain to my significant other why there’s a random tattoo on my hindquarters.