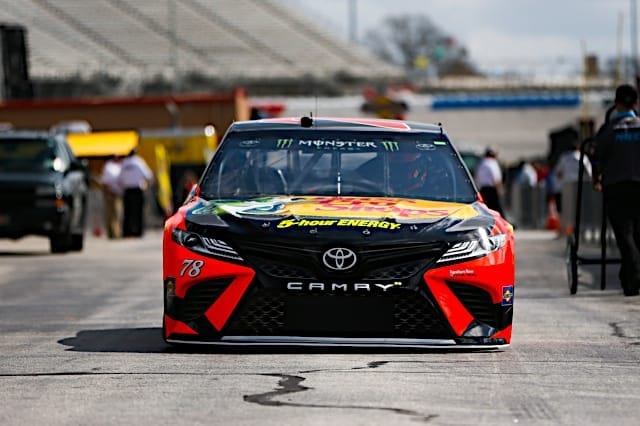 After failing to make it through pre-qualifying inspection three times, the No. 78 team did not post a time during qualifying, which puts Truex deep in the starting field. Additionally, car chief Blake Harris was ejected from the race track for the remainder of the weekend. Truex will also face a 30-minute practice hold Saturday.

“It’s unfortunate that we ahd a situation where we had multiple failures in what was otherwise a very successful debut of the optical scanning station,” NASCAR senior vice president of competition Scott Miller told FOX Sports 1. “We had rear wheel alighment problems, and we had body scan problems for the rear wheel openings and we just weren’t able to get all of the things legal in those attempts.”

Had the team elected to go through the inspection station an additional time on Friday, it would have been at risk of losing a second crew member, most likely crew chief Cole Pearn. Inspection attempt counts will reset on Saturday.

“Look, it’s a new process and we’re working hard collectively, the whole garage is, to figure the boundaries out and try to get through,” Furniture Row Racing president Joe Garone said. “And NASCAR is working through the equipment the same was and it’s just tough. One time you go through and the next time you don’t. You go through again and some things pass tht didn’t pass the time before. It’s just frustrating, but we’ll get it all worked out. It’s just a matter of time.

Through 19 previous races at Atlanta, Truex has two top fives and seven top 10s, including a best finish of third in 2008. Since joining Furniture Row Racing, he’s finished in the top 10 in three of four races, though he’s started no worse than 14th during that time frame.

I guess this is news because of the ejection of the car chief and new process? They routinely failed multiple times pre race inspection in 2016 and 2017. They are doing to same old same old. Including failing in 2016 a post race inspection which he won, and nothing was done about it.

And one of them is in essence sponsored by nascar, and one has declared bankruptcy.

Or, How can we spin this and try to pretend that they weren’t trying to cheating?