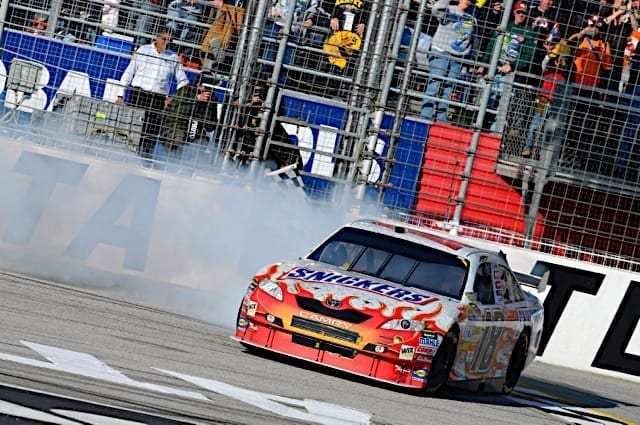 10 years ago, Kyle Busch turned into Victory Lane at Atlanta Motor Speedway, and opposed to many of his Monster Energy NASCAR Cup Series wins before then or since, this one was special in more ways than one.

Starting his 350th race with Toyota in Sunday’s Folds of Honor Quik Trip 500 from Atlanta, timeliness has set in nearly a decade later. Winning dozens of races and the 2015 championship, the duo of Busch and Toyota didn’t meet victory until this Georgia track in March, 2008.

Kicking off his fourth Cup season, Busch, then 22, was beginning a whole new era in his career. After three years with Hendrick Motorsports, he made the jump to Joe Gibbs Racing’s No. 18 for the 2008 season. And as the sport saw its first full season with the Car of Tomorrow, Busch also saw a new manufacturer in Toyota, a winless car make at the time that was also fresh to the JGR organization.

So much change in so little time.

“It was a scary situation for me to be in, not knowing a lot of my surroundings and who I was around,” Busch said. “From transitioning from Hendrick Motorsports to Joe Gibbs Racing, Chevrolet to Toyota and figuring out where my new home was going to be. But becoming teammates with Tony Stewart and Denny Hamlin was certainly a key for me.”

The fourth race that season led Busch to Atlanta. Following two top fives in the first three races, he ended up dominating the Kobalt Tools 500, leading 173 of 325 laps en route to his first win for JGR.

“It was the biggest one of my career,” Busch said of what was only his fifth Cup win. “I was really happy in that situation to get that relief.”

But the win wasn’t without some close calls, as Busch battled hard with Carl Edwards for the lead mid-race before having to get by the lapped car of Dale Jarrett on the final lap.

“There were some lapped cars slower than me, I got up on their bumper a few times to get them off the bottom,” he said. “I remember we were locked into running around the yellow line. Carl [Edwards] was super fast that day as well, we were chasing him for much of the day. First and second, back and forth with Carl before he had an engine failure and we took over as the dominant car for the rest of the race.”

Above all else, the name on the front of his chassis is what made this win shine. It was Toyota’s first-ever win in the Cup Series, bringing a foreign nameplate to Victory Lane for the first time since 1954. It turned out to be the first of many historic feats with Busch behind the wheel.

“Being able to win so early in the season, not only for myself but for Toyota,” he said, “the relationships I picked up with Mars, JGR, Snickers that day. It’s cool to look back on all that to see where we’ve come since then.”

Indeed, 10 years later, Busch will chase his 40th victory in a Toyota on Sunday from pole position.

“I’ve gained a lot of family in this relationship over just being friends.”