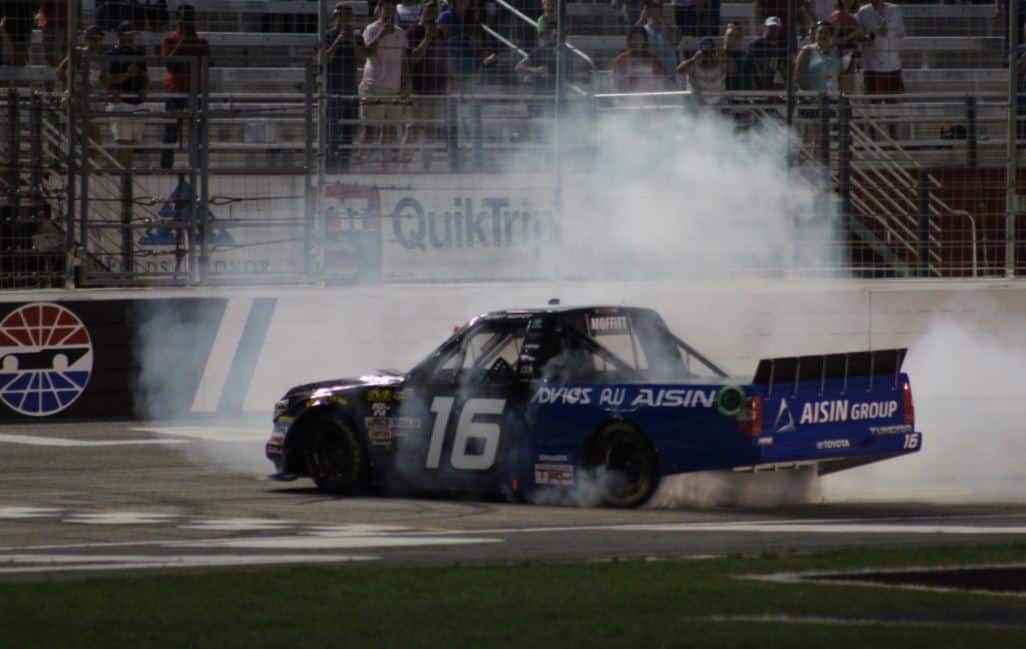 At Michigan in 2016, we saw a three-wide move for a Camping World Truck Series victory by Brett Moffitt.

Saturday night at Atlanta Motor Speedway, it happened again, as Moffitt took it three-wide in an overtime restart to pull away with the win in the Active Pest Control 200.

Retweet to congratulate @Brett_Moffitt on his second career win! pic.twitter.com/2TZs5suCWD

The second of his career, the win comes in only his second race with Hattori Racing Enterprises, giving the team its first visit to Victory Lane in the series.

“Once I got into Turn 1, I was able to clear [Myatt Snider], and we were able to drive away,” Moffitt said.  “I expected to be good. We don’t have the biggest shop or the most trucks, but we’ve made damn sure we have the right people. I knew we’d be successful, I just didn’t think it’d be this early.”

The win may not have been possible if it weren’t for a shocking turn of events in the No. 4 pits of Kyle Busch. During the final pit stop under caution with two laps to go, Busch lost his left-rear wheel exiting pit road. The issue cost Busch, who led a race-high 67 laps, the race lead and a shot at the victory. He finished 21st.

The error brought names like Noah Gragson to the forefront, as the sophomore driver drove from ninth to second in the final two-lap shootout.

“Pretty hectic at the end,” Gragson said. “Restarted ninth, came back to second. I felt like I prepared pretty well this weekend. Just need to get better, I’m disappointed in myself. I need to execute better, personally.”

“I’m not going to sit here and say I was perfect because I’m never perfect,” Sauter said. “There are things I can work on to do better.”