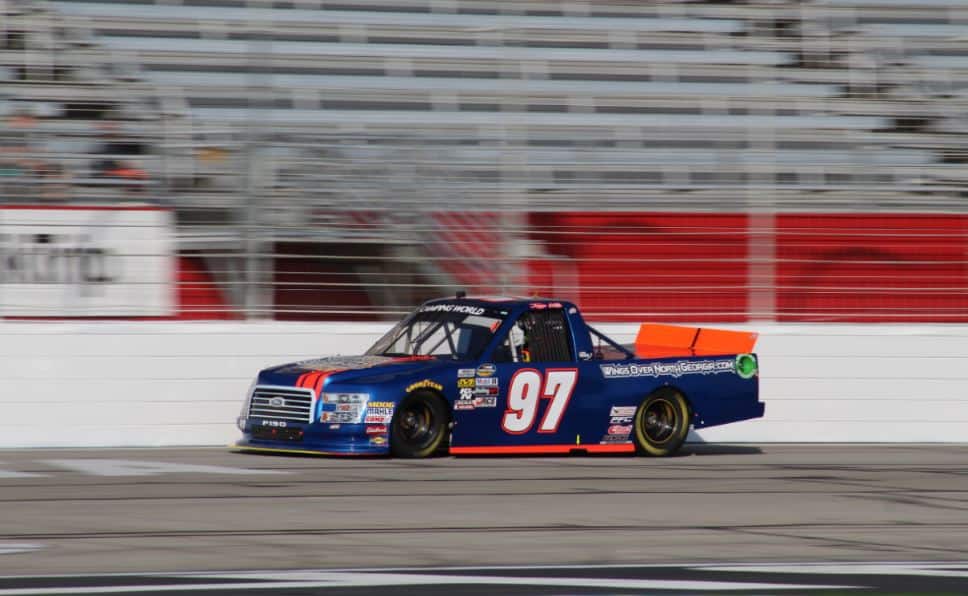 Jesse Little returned to the NASCAR Camping World Truck Series this weekend in Atlanta. The start was his first at the 1.5-mile track in Hampton, Ga. and his first since Phoenix last season.

The young driver certainly made the most of it. His family-owned truck rolled off the hauler quick and continued to improve over the weekend. In fact, the No. 97 sat at the top of the scoring pylon for a good while during Friday’s final practice session.

Little’s speed ultimately carried over to the race where he earned his second career Truck Series top-10 finish.

“I came here and I wanted to learn and I wanted to gain respect and hopefully, we did both tonight,” said Little. “We had an incredibly fast Wings Over North Georgia Ford. It was fun to compete with those guys and be up front battling with them. I learned a lot and hopefully, come Dover in a couple of months, we’ll be on top of it and be up there a couple more spots.”

Over the off-season, the organization switched over to Ford, which ultimately seemed to produce a successful combination. But Saturday’s performance was just the beginning for the organization as they begin to trek toward their next race in a few short months.

“Over the winter, we decided to do it right and go compete for wins,” Little said of the decision to pursue a limited schedule. “I am not one to come out here and ride around and neither are the guys who are working with me. It’s a great chemistry we have, we busted our tails over the winter and came here with a plan. We did everything we could to execute and not make any mistakes.”