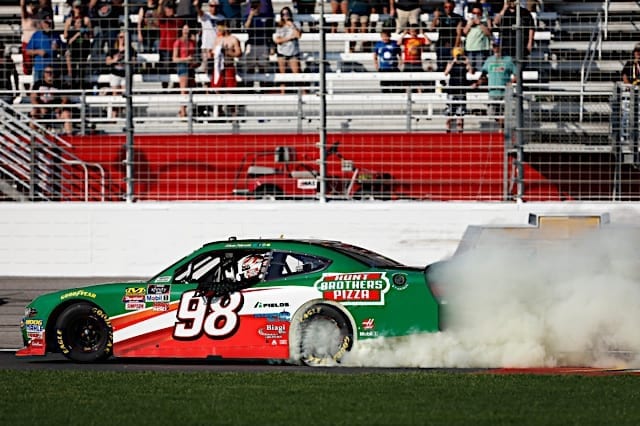 Whenever Kevin Harvick enters any type of race at Atlanta Motor Speedway, he is the odds-on favorite to go to Victory Lane. Saturday’s Rinnai 250 was no different.

Christopher Bell started from the pole and led the opening 12 laps before Harvick put the No. 98 Ford out front. Harvick went on to lead until a caution flew with a handful of laps to go in the stage and decided to pit. The No. 98 restarted ninth but in just one lap got to the front, capturing the first stage.

In stage two, Harvick led wire-to-wire, picking up the stage victory with ease. The final segment was much of the same as the No. 98 Ford won by over four seconds. Just seven cars finished on the lead lap as the veteran continued a history of strong performances at this track.

“It’s just been a really good place for me,” Harvick said in Victory Lane. “The racetrack has stayed very similar to what its been for a number of years. I think when you look at the techniques, the things that I do in the car and they give me what I want in the car as far as the feel and it just applies here. It’s been a great racetrack for us.”

Saturday was Harvick’s 98th career NASCAR victory, ironically enough coming in the No. 98 car. The victory marks Biagi DenBeste Racing’s fourth triumph in the XFINITY Series. Aric Almirola won twice with the team on restrictor plate tracks the past two years and Mike Wallace captured a Daytona victory in 2004.

Cup regular Joey Logano finished second on the afternoon. He was followed by Bell, John Hunter Nemechek, and Elliott Sadler to round out the top-five performers.

I’ve said this before, and I’ll say it again; tire management racing is the best form of competition.

Sure, Harvick put on a clinic, leading all but 22 laps. However, the racing behind the leader was incredible. Now, I know some fans will say “But we want passing for the lead.” Sure, I get that, and the No. 98 was just a level above. I’ll take Harvick against the field every time at Atlanta.

When you look at the rest of the field, yeah, there were only seven cars on the lead lap at the end of the event. But the racing was on point. For much of the second stage Justin Allgaier and Ryan Truex were going back and forth, at times bouncing off one another.

Chris Rice, Truex’s crew chief was none-to-pleased with the way Allgaier was racing the No. 11 car. But rubbing’s racing, and we need to see that type of action on a 1.5-mile oval like this one.

Conserving tires and figuring out when to race hard and when to back off makes for exciting racing – comers and goers. JR Motorsports had two flat tires, the first of which came with five laps to go in the opening stage for Michael Annett. With 25 laps to go, Daytona victor Tyler Reddick cut a right-rear tire, ending the day in 19th. He learned a lesson in how to conserve equipment over a long green-flag run.

He wasn’t the only one. John Hunter Nemechek cut a right front tire down earlier on, while Brandon Jones also fell victim to a tire issue. Ultimately, if a driver ran too hard early in the run, they paid for it later on.

It’s the type of skill I feel fans want to see exposed. It’s why old, worn out racetracks have some of the best races every year.

The 28th race of the 2013 XFINITY Series season was held at Dover International Speedway. It also marks the last time Morgan Shepherd has been running at the end of an event.

Morgan Shepherd heads to the garage, keeping his DNF streak intact. He has not finished an Xfinity race since 2013 (71 straight DNFs).

Since that race in Dover, Shepherd has started 71 XFINITY races and hasn’t finished a single one. Whether it’s been a crash, blown engine or simply start-and-park, the No. 89 car hasn’t seen the checkered flag in nearly five years.

Last season, Shepherd spoke to Frontstretch when the series was heading to Bristol Motor Speedway in mid-April. He addressed why he continues to race.

“I always get the question ‘Morgan, when are you going to quit?’’ he said. “Well, my plans never seem to work out. I’m here as long as the Lord wants me to be and carry the Cross and continue the charity. That’s my real worth.”

Shepherd, 76, has been around the sport since 1970. He’s a former winner in both the Cup and XFINITY Series. However, 71 consecutive DNFs doesn’t seem like much fun. For a team that has less than a handful of chassis and employees, when is enough, enough?

It took just 10 laps for Cole Custer’s day to end after crashing into the outside wall hard on the frontstretch.

Elliott Sadler had a huge run on John Hunter Nemechek, shoving him down the track in front of an oncoming Custer. That’s when the No. 00 car made an evasive move to try and miss the No. 42 car.

“I was just kind of biding my time there, trying to save my tires and I don’t even know exactly what happened,” Custer said following the incident. “I just got hit going down the straightaway and got wrecked from there. It kind of sucks because I thought we had a pretty good car. I just don’t really know what else to do.”

Custer’s head-on collision with the outside retaining wall came in the tri-oval, a place that typically doesn’t see cars spun head on into at Atlanta. It looked vicious, but the No. 00 team plans to be ready for Las Vegas next weekend. It’s a track where Custer will also be making his Cup debut.

Well got wrecked on lap 10…don’t really know what everyone was thinking, but we’ll move on. Looking forward to next weekend!

A driver competing for Chip Ganassi Racing in the XFINITY Series shouldn’t be labeled as an underdog. However, John Hunter Nemechek made his series debut on Saturday and had one helluva race.

Nemechek started the 250-miler in third position, but couldn’t make it through the opening stage without overcoming some adversity. With seven laps to go, the No. 42 car had a shredded right front tire, putting the rookie one lap down in 35th place.

After Michael Annett brought out the caution with five laps remaining in the stage, Nemechek found himself back on the lead lap. He was a disappointing 35th in his first XFINITY stage but there was still hope for a solid finish.

The second stage was all about progress for the 20-year-old as he ended the first half of the event in 13th. It was a steady, consistent stream of fighting to the front for a youngster who didn’t panic stuck in traffic.

When the third stage began, Nemechek surged inside the top 10, then top five. When Daytona winner Reddick had a tire go down with 25 laps to go, he jumped up to fourth.

Despite the top-five effort, Nemechek finished more than a half-lap behind Harvick. That’s how much the veteran dominated on Saturday. But overall, it was a debut to be proud of for this up-and-coming talent with Chip Ganassi.

“A really great day,” Nemechek said of his fourth-place effort. “It’s a successful day. I think I told you earlier if we could run top five today I would be happy and we definitely passed a lot of cars. It was a really fun learning day.”

Nemechek is splitting time in the No. 42 car with Kyle Larson. It’s undetermined when his next XFINITY start will come.

For the first time in a long time, there were only three Cup Series regulars in an XFINITY event that had both series at the racetrack. Harvick dominated, leading 141 of 163 laps with Joey Logano finishing a distant second, over four seconds off the pace.

Ty Dillon was having a solid run inside the top 10 until the No. 3 car pitted with 37 laps to go. NASCAR deemed his crew was over the wall too soon, requiring a drive-thru penalty down pit road. Dillon finished the event in 13th, one lap behind.

“Thank you to Atlanta for not repaving this place. Hopefully, we can squeak another year out of it. This is one of the best surfaces we go to on this schedule.” – Christopher Bell

“It felt pretty slick. At the end, the sun came out there, but we had shade there for a while. When the sun came back out, it got wild.” – Kyle Benjamin

“We just got collected in something and there’s not much we could do.” – Cole Custer

Atlanta Motor Speedway has become the house that Harvick built, picking up his fifth career XFINITY Series victory at the venue. Over his last six starts at AMS, the 2014 Cup Series champion has four checkered flags paired with three different organizations.

When it comes to Cup races at Atlanta, Harvick is just as stout. Dating back to 2012, he’s led at least 101 laps in five of the six races at the mile-and-a-half facility although never picking up a victory.

Among the XFINITY Series regulars, Christopher Bell proved Saturday that he will be a force to be reckoned with in 2018. The rookie raced inside the top five all race long, finishing second in the first two stages. Elliott Sadler ended the day in fifth and is the only driver to kick off the season with back-to-back top-five efforts.

The XFINITY Series heads out west for the next three weeks, kicking it off with the Boyd Gaming 300 at Las Vegas Motor Speedway. Joey Logano is the defending winner, leading 106 of 200 laps. The green flag is set to fly shortly after 4 p.m. ET on March 3 and can be seen on Fox Sports 1.

Christopher Bell was a half lap ahead of the next Xfinity regular. Most of the race he was the only one within 5 seconds of Harvick. He brushed the wall with a few laps to go or he would have finished second. Yeah, he’s got the equipment, but so do other JGR drivers, the JRM drivers and others. A little under the radar, but very impressive.