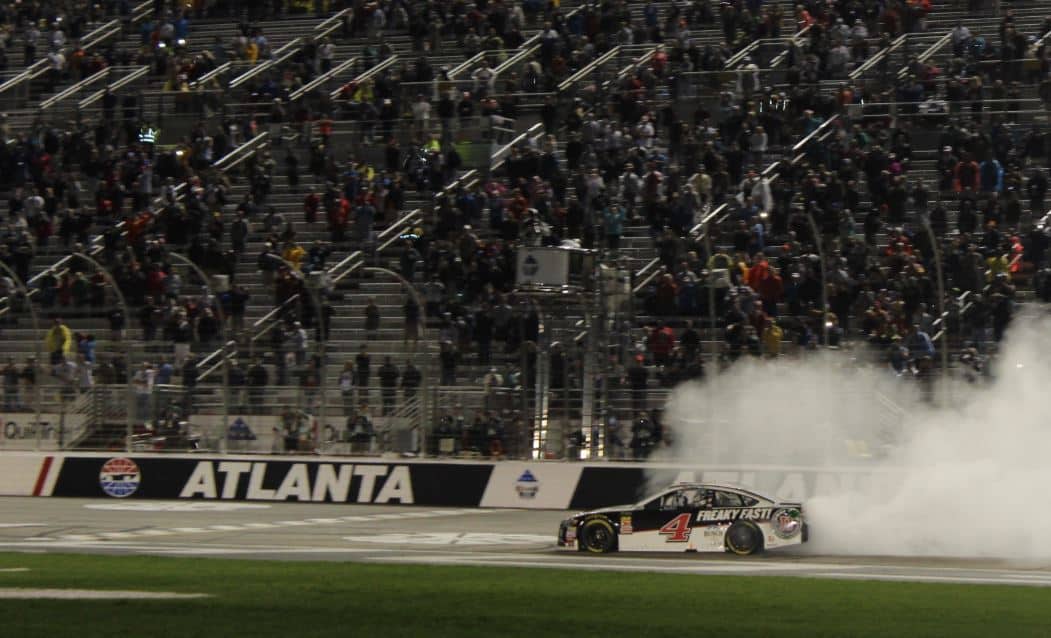 They called it “Harvicking.” Kevin Harvick called it running the bottom groove, and it’s what brought the No. 4 Stewart-Haas Racing driver to Victory Lane at Atlanta Motor Speedway.

Leading 181 of 325 laps, Harvick scored his 38th Monster Energy NASCAR Cup Series win and his first at Atlanta since 2001, his first career Cup win just weeks after the loss of Dale Earnhardt. The win also stands as a weekend sweep after winning the XFINITY Series event on Saturday.

“There were so many demos that seemed to haunt us here for a long time,” Harvick said. “I love racing here, it’s good to be back in Victory Lane. Finally!”

Brad Keselowski had one more shot at Harvick when Trevor Bayne blew a motor with 28 laps to go. With a restart with 24 laps to go, Keselowski lined up second alongside the No. 4. Despite holding his own mid-race against Harvick, leading 38 laps on the day, the defending Atlanta winner just couldn’t hang on to Harvick’s pace.

“Nobody had anything for Kevin today,” Keselowski said. “He was just better today. I had a blast today. You’re really working your tail off inside the car. It feels old school, which is what I like.”

“It’s really cool to have all four Stewart-Haas cars running good,” Bowyer said. “It feels good to have a podium finish. Obviously, we need to be better to run with Kevin. We stubbed our toes a couple times.”

Though Harvick dominated the rain-threatened day and night of racing, eight drivers held the top spot throughout the race. Ryan Newman led the opening 17 circuits after starting second before Kyle Busch led for nine.

Pit strategy and multi-groove racing took over in the race’s second half when Denny Hamlin stretched his green-flag runs to lead 26 laps. Kurt Busch led Harvick and Keselowski while the top three battled for the lead near the end of Stage 2.

For Elliott, fending for a lead-lap finish wasn’t enough for the third-year driver.

“We have a lot of work to do,” Elliott said. “Trying to stay on the lead lap is not where you want to be. I’m not sure how much more we could’ve got.”

Bring her home, @KevinHarvick! ??? Congrats to everyone on the No. 4 @JimmyJohns team and everyone back at the shop. We did it! #FreakyFast#SHRacing10Yrs pic.twitter.com/WtBcB4U5KN

When Kevin Harvick gets his car the way he wants it, he is so dominating. Atlanta separates the real racers from the Sunday drivers.
Zach, I thought you have to win all three NASCAR races over the weekend to be considered a Sweep?
What’s up with little Keelan Harvick? It’s hard to be the cool parent sometimes. And the cameras are constantly on you, waiting for you to snap.