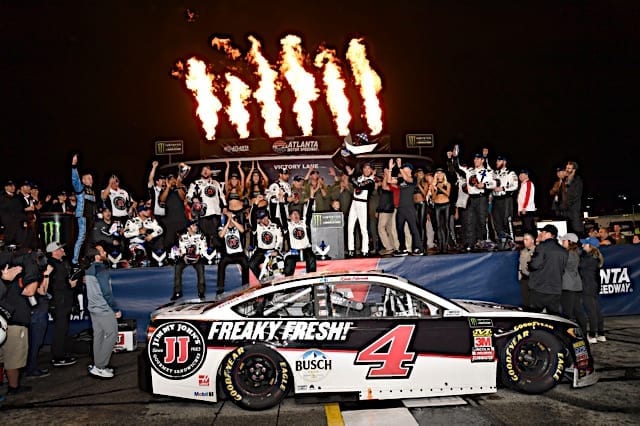 Kevin Harvick cruised to the win, but Sunday was a good day for all of Stewart-Haas Racing. All four of the organization’s Fords finished in the top 13. Harvick and Kurt Busch combined to lead 233 laps. And while Busch faded late, Clint Bowyer was strong after the final restart, fighting his way to third at the end of the race. Bowyer also scored points in both of the first two stages, finishing second to Harvick in the first stage. Despite his struggles in recent years, it’s hard to believe Bowyer’s done winning, and Sunday was a step in that direction. He also sits fifth in points. It’s too early for that to mean much except that Bowyer is strong out of the gate this year, and he’s worth watching.

A lot of people pegged this race as the make-or-break for the new Chevrolet Camaro ZL1. The first intermediate track on the schedule posed a major challenge to the Bowtie Brigade, with Kyle Larson’s No. 42 the only Chevrolet that was remotely competitive Sunday, and even he could muster only a low top 10. Chase Elliott came on late to finish 10th but wasn’t strong enough for more. Wind tunnel numbers are one thing; actual performance is another, and it certainly wasn’t there Sunday.

But it’s far from time for fans of the Chevy drivers to hit the panic button. Remember how dominant the Toyotas were late last year? Right. Remember how dominant they weren’t early in the year? Martin Truex Jr., having a career year, was the only Toyota driver to find Victory Lane in the first half of 2017. The Camry had a new body style, and it took Joe Gibbs Racing, the manufacturer’s number one team, until July to wheel it across the finish line first. Given that curve, we may not know until early summer how competitive the Camaros really are.

Where… did Harvick come from?

Harvick has led the most laps in this race for the last four years with nothing to show for it, but this time he finished what he started, leading laps en route to his second career win at Atlanta. The driver of the No. 4 Ford also won the XFINITY Series the race on Saturday. Harvick started third Sunday, but from the drop of the green flag, he was the class of the field. He already had a firm hold on the most laps led among active drivers at Atlanta, and he added to that Sunday.

Harvick’s last win at Atlanta came in a last-lap duel to the wire with eventual 2001 season champion Jeff Gordon. It was also Harvick’s first career Cup Series victory, and the first for the No. 29 Richard Childress Racing team, which had changed to that number from the No. 3 just weeks before following the death of Dale Earnhardt.

The race perfectly illustrates Harvick’s career. That first win came for a brash up-and-comer who had everything to prove, and this one came from a veteran racer and champion who’s also a Hall of Fame lock. Harvick has nothing to prove except to himself that he can keep on winning at 42.

For some teams, most notably the defending champion No. 78 Furniture Row Racing group, it came before the race even started. This weekend was the one the new inspection process was really put to the test, and it tested some teams. The No. 78 failed the process three times before qualifying, which draws a penalty from NASCAR, an immediate suspension of car chief Blake Harris. Rather than risk a fourth failure, which could have meant a suspension of crew chief Cole Pearn as well, the team sat out qualifying, opting to start at the back of the field. Several other teams initially failed pre-qualifying inspection but were able to pass without further penalty.

The No. 78 team was also one of a handful of teams who had issues on pit road Sunday after a NASCAR-issued air gun failed during a stop. Teams have backup guns, but the time lost changing them out means the damage has been done. While the ideas behind them are sound, it’s on NASCAR to make sure teams don’t wind up at a disadvantage through no fault of their own.

Finally, not a new rule, but the first time it’s had possible implications across series: NASCAR’s Truck Series rules call for a three-race suspension of the crew chief, tire changer and jackman if a wheel should come off a race truck outside the team’s pit box. The tire changer and jackman for Kyle Busch’s truck team, which lost a wheel Saturday, both also pit cars in the Cup Series for Stewart-Haas Racing, and a suspension could see those teams without a crewman on the western swing.

NASCAR does have the option to suspend them from the Truck Series only, which seems to be the fair option here, but if the sanctioning body wants to send a stronger message, it could issue suspensions from all series.

This weekend highlighted a few hiccups with the rulebook, and while it’s likely all will be worked out in coming weeks, keep an eye on them as they do have the potential to be game changers.

With five wins, Johnson has had more success at Atlanta than any other driver in Sunday’s race, and that makes him a perpetual favorite at the track. But this weekend, he couldn’t find any magic at all.  He was solid in practice but qualified just 22nd, and even before a blown tire and the resulting damage, he was never a factor at all.

It’s hard to look at Johnson, 42, now the senior driver in the Cup garage and not wonder if time has finally caught up with the seven-time series champion. But there’s something else to consider as well.

The current Cup car has less horsepower and is lighter than its predecessor, and some drivers have compared it to XFINITY cars rather than previous Cup cars. Johnson was never as comfortable in those cars as he was in the heavier, more powerful Cup cars and had little success in that series.  Perhaps NASCAR has finally found a Cup car he can’t drive well. It’s likely that Johnson will find Victory Lane again, probably a few times, in his career, but whether he can become the fourth driver with 90 career wins is in question.

How… big a milestone is David Ragan’s 400th career start?

For Ragan, it was extra special because it came at his home track. Ragan hails from Unadilla, Georgia and first raced Legends cars on the quarter-mile infield course at AMS. The state also commemorated his achievement.

And it’s a significant one: Only about 60 other drivers have reached the 400-start mark in NASCAR’s top series.  That’s fewer than the number of drivers who raced in the three national touring series races this weekend and just a handful among the hundreds who have taken the green flag over the years. Just 11 active drivers have more starts than Ragan. He has taken some knocks over the years, but he’s clearly a valuable asset in the garage.

NASCAR also needs to be cognizant of the situation in the Truck series case since the tire changer had already gotten around to the lefts due to issues on the right front and the driver just took off, this one is more on the driver and crew chief not the jackman and changer. The jackman never even got into position to jack the truck and the tire technically was not changed. The rule is there for newly installed tires not weird issues with an already “installed” i.e. used, tire