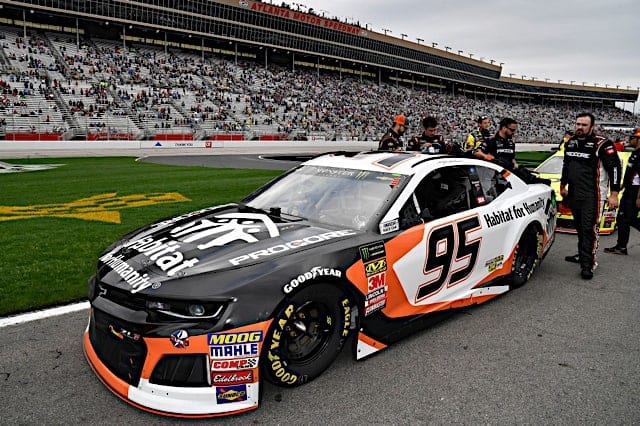 Reality has now set in for the small teams: Daytona is over.

Following a week where the competition will never be more even — at least until the next restrictor-plate race — The Monster Energy NASCAR Cup Series hit its bread-and-butter circuits of 1.5-mile tracks, starting at Atlanta Motor Speedway.

But just how common is an Atlanta? The elderly track surface has been well-documented however, all the teams spent this weekend testing out what they might have for the season to come. From the Optical Scanning Station to the five-person pit stops, new Chevrolet designs, new driver/team pairings, etc., here is a lot of figuring out to do even before the green flag waves.

For small teams, all of these pieces couldn’t be more prevalent, as some lack the full-time driver, ideal funding and the stability to push the limits both on and off the track. That’s what made Atlanta an interesting weekend for the small-scale teams.

One team who battled with some of these new challenges was Rick Ware Racing, the Chevrolet camp which kicked the season off with its best-ever result at Daytona, finishing 12th. This weekend, Harrison Rhodes made his debut in the No. 51 and noted a few obstacles he’d have to overcome in his first 500-mile race.

“It’s definitely a place to test my abilities,” Rhodes told Frontstretch Friday at AMS. “I’m not usually exhausted after XFINITY races or anything. That will be the biggest difference, how long the races are.”

As I said, Atlanta is the place the real season starts and where we see the real numbers start adding up for the underdogs. For example, there were no underdogs in the top 20 in Sunday’s Folds of Honor Quik Trip 500. Not the best sign, but then again, Kevin Harvick didn’t make it easy by putting them three or more laps down before the checkered flag.

Kasey Kahne was the top of the heap in Atlanta, finishing 21st for Leavine Family Racing. Impressing in qualifying toward a 14th-place starting spot — only the eighth top-15 start for LFR in its 150th race — the first-year combo ran mid-pack throughout the 3.5 hours of racing, keeping on pace with the likes of Alex Bowman and Jamie McMurray inside the top 20.

Behind the Chevrolet were the two Fords of David Ragan and Michael McDowell. For Ragan, his home track treated him well as he built upon his 29th-place qualifying to finish 23rd in his 400th Cup start. McDowell qualified a strong 17th and was even seen overtaking drivers like Bowman and Erik Jones at one point in the race. However, he finished one spot behind his teammate in 24th.

In what will become common this year, there are more teams in this category than in “Top of the Class.” And that’s due to obvious reasons: these guys simply don’t want to be happy with a top 25, especially in a 36-car field like we saw Sunday.

JTG Daugherty Racing has shown that potential to break out at any point to score consistent top 10s. It kicked off the year with a double-top-10 day in Daytona, but Atlanta showed a very early sign of struggle once again at the 1.5-milers. Chris Buescher managed to crack the top 25 in 25th while his veteran teammate AJ Allmendinger was never able to get the handling right on his No. 47 Chevy and ended the race 29th.

Ty Dillon and Cole Whitt squeezed between the JTG guys, finishing 26th and 28th, respectively. For Whitt, Sunday was his first start of the year in what will be a partial schedule with TriStar Motorsports.

Ross Chastain made his first Cup start outside Dover, as he piloted Premium Motorsports’ No. 15 Chevrolet to 30th spot. The XFINITY veteran ran double duty, finishing 16th on Saturday. He was followed by Matt DiBenedetto, who battled tight conditions all day before finishing 31st.

Darrell Wallace Jr. couldn’t repeat his Daytona dream night this time around. Qualifying 19th, he struggled to hang in the top 20. The race got worse when Trevor Bayne exploded a motor in the closing laps, which eliminated visibility, causing Wallace to crash into the back of Ricky Stenhouse Jr. The No. 43 finished 32nd, six laps down.

Rhodes finished 33rd on debut, followed by StarCom Racing’s Jeffrey Earnhardt in 34th and Gray Gaulding, who retired after 99 laps, in 36th.

Unlike the Cup Series, Saturday saw a big underdog story emerge in the form of Brett Moffitt and Hattori Racing Enterprises in the Camping World Truck Series race. The team entered the Georgia track never having a victory, but that changed on the final restart when Moffitt made a three-wide pass for the lead into Turn 1, clearing the pack and driving away for the win.

The win followed a pattern of twos for the small team: Only the second win of Moffitt’s career, the frontstretch burnout show came in only his second start for Hattori, a team in just its second full-time Truck season.

Stewart Friesen scored sixth in his No. 52 Chevrolet while Jesse Little put on another impressive run in his family-owned No. 97 Ford. Finishing eighth, the 20-year-old left a little disappointed after driving up to fourth before the race’s final caution. Anytime a small team leaves disappointed with a top 10, you can smell the improvement.

The double-header day at Atlanta on Saturday also saw the XFINITY Series race under the heat of the sun. Here, Ryan Truex was the top underdog, scoring a second-straight top 10 for Kaulig Racing in ninth.

Spencer Gallagher finished 14th, scoring his sixth top-15 finish on a 1.5-mile track. Considering he only has nine top 15s in his XFINITY career, his strong suit may very well be on intermediate tracks.

Chastain was the final underdog performer of the race, finishing 16th one week off a top 10 in Daytona for JD Motorsports.

Just wanted to say thank you for all the kind words and support in the last 24 hours. This win was so special for me and everyone at @Hattori_Racing and @AisinGroupUSA. Without our partners and supporters we are nothing. Focused on Vegas let’s go get another trophy ?

Man Atlanta can be a tough one and it was last night. Team did a great job on the weekend and car had good speed at different times. We will learn together and be better in Vegas.

"It's a team sport, we're all for one." @Chris_Buescher's @LA_Hot_Sauce team rebounded from an issue on pit road to come home P25 from @amsupdates. pic.twitter.com/DlAJsT1cqV

The good news is:

We’ve got a car in one piece and we can probably use it again at @LVMotorSpeedway in less than a week. That means a lot for a small teams

Awesome first time in the Cup car, was able to get some practice under my belt and get a game plan together on adjustments we want to make for tomorrow’s race. Looking forward to 500 miles tomorrow! pic.twitter.com/LcGjHSrueM