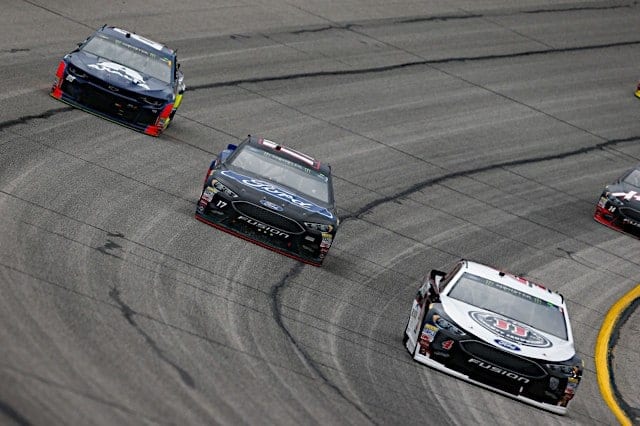 The forecast for Sunday looked gray and gloomy. Would there be a Cup race at Atlanta? The answer turned out to be yes, but barely. Runner-up Brad Keselowski said he felt raindrops during his postrace interview with Fox Sports. It was a clean race; there were only three single-car incidents that brought out cautions, as the other two yellow flags were for the end of stages.  That set up a strategy race to see who could best manage fuel and tire wear, which doesn’t have the fireworks of a restrictor-plate track but provides its own tension and excitement.

Kevin Harvick crushed the field and led the most laps in the Folds of Honor QuikTrip 500 for the fifth year in a row, and this time was able to get the victory for Stewart-Haas Racing. It was his first at the track since his inaugural victory in the Monster Energy NASCAR Cup Series in 2001, three races after replacing Dale Earnhardt.  In an emotional celebration, Harvick again gave the crowd a three-fingered salute in memory of the Intimidator.

It seemed especially fitting considering Austin Dillon’s win in the Daytona 500 last week: the 2001 win showed that NASCAR could go on after losing the biggest star of the sport, and Harvick’s victory this week showed that it was all right that Dale Earnhardt Jr. is no longer racing. The No. 3 and other famous rides are now piloted by a new generation of racers, but their memory and impact can still be felt and appreciated.

Keselowski finished second for Team Penske, while SHR’s Clint Bowyer was third, sweeping the podium spots for Ford. Denny Hamlin’s fuel strategy didn’t quite work out the way he wanted, as his Joe Gibbs Racing Toyota was fourth. Reigning champion Martin Truex Jr. rounded out the top five after starting in the rear of the field for failing pre-qualifying inspection.

Stewart-Haas Racing had a fantastic day, matching one of the best races in team history with all four drivers scoring points in both stages. Harvick dominated all day, winning the race and the first stage. Bowyer earned his first top five at an intermediate track since Homestead in 2013. Kurt Busch ran up front most of the race and ended in eighth, and Aric Almirola finished a solid 13th. SHR XFINITY driver Cole Custer will make his Cup Series debut next week at Las Vegas Motor Speedway for Rick Ware Racing.

The new NASCAR-mandated pit guns aren’t working out too well so far. The pit crews of Harvick, Truex, Kyle Busch and Alex Bowman all had trouble with the guns during the race. That’s four of the top teams in SHR, Furniture Row, Gibbs and Hendrick, and all three manufacturers. And it wasn’t the first weekend there was trouble.

We had a gun blowout last week too. https://t.co/9WJrBwbYuk

Team Penske also had a great day, with Keselowski winning the second stage and matching his car number with a second-place finish. Points leader Joey Logano ran top 10 in both stages and finished sixth, and while Ryan Blaney had a quiet day, he also matched his car number in 12th.  Their may-as-well-be-teammate Paul Menard ran his typical quiet, clean race and finished 16th.

Jimmie Johnson has now gone 25 races without a win, the longest stretch of his Cup career. Counting the Clash and the Duel, he’s torn up his race car in all four races run in 2018. He finished 27th at Atlanta, four laps down, and is currently 35th in the standings, behind Matt DiBenedetto, Gray Gaulding and Jeffrey Earnhardt. Even part-time drivers D.J. Kennington and Mark Thompson have more points than Johnson does. He’ll probably get out of the rut eventually, but two races into the regular season, Hendrick Motorsports’ best finish is 10th. For an organization of its caliber, that’s a dismal situation.

David Ragan made his 400th career start in the Cup Series on Sunday at his home track. The veteran Georgian has driven for six teams during his career, and his input has likely played a role in Front Row Motorsports’ strong start to 2018. The only other drivers with that much Cup experience are Kurt Busch (614), Harvick (612), Ryan Newman (596), Johnson (581), Kasey Kahne (506), Kyle Busch (464), Truex (443), Hamlin (436) and Bowyer (435). Menard made his 400th career start last week at Daytona, which was also the 250th start for Ragan’s Front Row teammate Michael McDowell.

Only 36 cars were entered in this race, the smallest field in twenty years and the first time this has happened since the charters were issued. Travel costs on the West Coast swing might have played a factor; unchartered teams only receive about 35 percent of what chartered teams earn each race. Open teams don’t usually have much of an impact on the race, but they are necessary, too. Teams like Front Row, Germain and JTG Daugherty all started as start-and-parkers, but over the years have been able to rise into the middle class of the garage. Premium Motorsports is entering its unchartered No. 55 this week at Las Vegas, so it will be a 37-car race, but this shrinkage is concerning and will be something to keep an eye on as the season progresses.

It’s not quite Bill Elliott’s No. 94, but Jamie McMurray’s No. 1 McDonald’s scheme looked really good this week. How much of that is from the barrage of McDonald’s ads during the Winter Olympics? Probably a little bit, but also, the red, yellow and black just look great together, and it’s just a really interesting swirl of the colors on this wrap. It would look slightly better if the number was slanted one way or the other, but this is a nice scheme. The Golden Arches are always a welcome sight, whether on a race car or on the highway. It even made for a tasty dinner Saturday night after a good day of adventuring at a book sale.

The Folds of Honor Foundation and QuikTrip are both headquartered near where I live, so it was cool to see them get national exposure as the race sponsors.

The Cup Series begins the West Coast swing this week at Las Vegas Motor Speedway for the Pennzoil 400 presented by Jiffy Lube. It’s another mile-and-a-half track, so the same racers should be in contention. I’m going with Kyle Busch to win at his home racetrack, as he has a win, two poles and nine top-15 finishes there. As my underdog pick, I like Kasey Kahne, who has three poles and seven top-10 finishes at LVMS.

My opinion is that open teams will only show up if they have a driver bringing enough funding to make it worthwhile. Not a good situation.

Uhhhh, 36 cars at Atlanta ! Atlanta is on the east coast , right on the way home from Daytona.
NOW starts the West coast swing. Who in their right mind ever picks Kasey Kahne to ever win.
I thought y’all said Th Dillon was going to go on a winning streak this year, how funny.