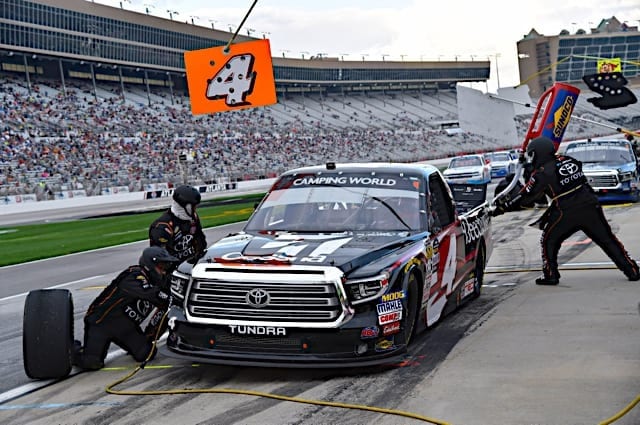 NASCAR released the weekly penalty report from last weekend’s races at Atlanta Motor Speedway on Wednesday (Feb. 28).  The most notable penalties handed down came in the Camping World Truck Series.

Kyle Busch Motorsports’ No. 4 team had an untimely pit miscue on its final stop on Saturday, which resulted in a penalty.

According to Kyle Busch, crew chief Marcus Richmond made an audible and told Busch to go after the crew had issues with the right front tire. Unfortunately, the left rear lug nuts had already been removed before Busch left.  The result was Busch’s left rear wheel coming off in Turn 1.

Not only did that cost Busch the lead and a potential win, it also cost the No. 4 team Richmond.  He has been suspended for the next three races, along with rear tire changer Coleman Dollarhide and jackman Ernie Pierce.  The penalty only applies to the Camping World Truck Series.  As a result, both Dollarhide and Pierce, who are on Monster Energy NASCAR Cup Series pit crews, will be able to still pit Cup cars.

In the XFINITY Series, both John Hunter Nemechek and David Starr‘s Chevrolets were found to have one loose lug nut after the Rinnai 250 on Saturday.  Both Mike Shiplett (Nemechek’s crew chief) and Tim Brown (Starr’s crew chief) have been fined $5,000.