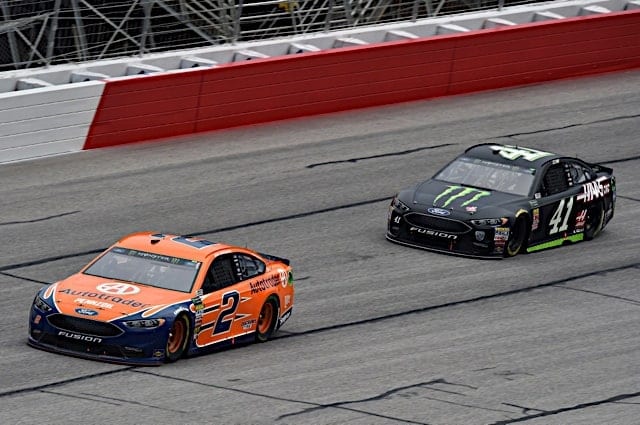 It’s probably safe to say many did not expect the Fords to be quite as competitive as they ended up being at Atlanta Motor Speedway in the Monster Energy NASCAR Cup Series.

Ford swept the top three and had five Fusions overall in the top 10. Led by Kevin Harvick, who won two stages in his dominating win, the Blue Oval paced all but 53 laps in the 325-lap race.

Meanwhile, the new Chevrolet Camaro, which has been hyped beyond relief since being revealed late last season, struggled. Ryan Newman benefited from his front-row starting spot and led the opening 17 laps, but those ended up being the only laps led by a Chevrolet. Kyle Larson was the only somewhat-competitive Chevy driver, running in the bottom half of the top 10 for the balance of the day before coming home ninth. Hometown hero Chase Elliott was right behind him in 10th, the only two Camaros to even finish on the lead lap.

It’s going to be interesting to watch this dynamic as the season goes on. Last year, Ford dominated right up to April; in the first 10 races, it won five races. The rest of the season following that, however, Ford won only five more races, with only two of them coming at a non-restrictor plate or road course race.

Mark Thompson, a 66-year-old part-time driver from Georgia, finished 22nd in last month’s Daytona 500. Despite of not racing at Atlanta, Thompson is still above Jimmie Johnson in points.

It’s always tough to play from behind, and Johnson most certainly is that, sitting just 37th in points. But that’s just what Johnson does. Last year he had a bad start to the season too, enough to where there were plenty of people asking if the dynasty was over. Then he won two straight races, and everybody forgot about it.

It’s just impossible to ever truly rule out the No. 48 team. Back in 2016 at when the playoffs began, he hadn’t won in 21 races — like five years in mortal time. But then he showed up for the playoffs and ended up winning his seventh championship. Crew chief Chad Knaus will figure out a way to come back. And Las Vegas Motor Speedway, a track where Johnson leads active drivers in victories at four, may be a prime place to start.

Will the boxing gloves come back on?

Las Vegas is a town known for two things: gambling and violence. It’s the home city for UFC and the site of countless legendary boxing bouts.

Last year, the Cup Series joined in on the action. Kyle Busch was involved in a last-lap incident with Joey Logano that took him out of contention for a top-five finish. Busch, who entered Vegas 24th in points, did not need for a top five to turn into a 22nd-place finish, and then went after Logano on pit road.

Like I wrote last year following the race, there is no excuse for this race not to be a sellout. It’s a promoter’s dream. Here’s Logano, who isn’t that popular a driver to start with, wrecking the hometown boy on the final lap of the race. Busch then, stupid or not, walks straight down pit road and faces the entire No. 22 crew by himself and draws blood. I’m still not convinced Vince McMahon himself didn’t just pay everybody off and script it. If this happened at Texas Motor Speedway, track president Eddie Gossage would have retired after the next Cup race there because it would never be that easy again. It was so great Gossage used it to promote his race anyway.

In a sport long criticized for its athletes being generic and more willing to shill for their sponsor than to show actual emotion, this was the complete opposite of the norm. And at a track that is now going to host two tripleheader weekends this year, it was something desperately needed.

Who is the favorite entering this weekend?

Brad Keselowski should be the odds-on favorite for this weekend. He won this race in 2016, and almost won again in 2017 before a mechanical issue with two laps to go took him out of the running, and is coming off a second-place outing at Atlanta. But Vegas currently has his odds of winning at 6-1, tied with defending winner Martin Truex Jr. for second best and behind Atlanta winner Kevin Harvick at 5-1.

To be fair, Harvick won this race in 2015. But he’s also led just one lap in the last two Vegas races and finished 38th last year following a crash.

As far as fantasy drivers to pick up, one interesting low cost driver to look at is AJ Allmendinger. He ranks 12th in points among all drivers in the last three Las Vegas races, with a seventh in 2015 helping to prop him up. Elliott finished third last season, but it’s hard to recommend any Chevrolet drivers until they find more speed in that Camaro. Finally, Jamie McMurray hasn’t finished out of the top 16 at Las Vegas since 2011 and would be a solid bet to finish in the top 20.

The best in the field has to be Ryan Blaney at 20-1. Take that and run to the bank if the No. 12 ends up in Victory Lane, which isn’t hard to foresee considering he finished sixth and seventh the past two years respectively.

Lol, do they pay these guys !