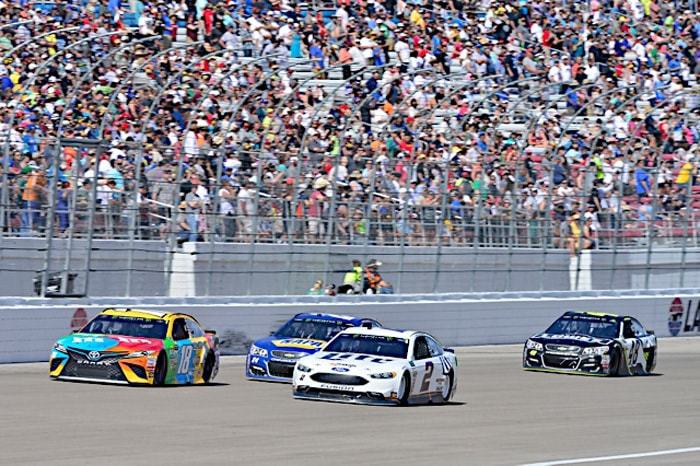 We were all witnesses to what is now referred to as “Harvicking” last weekend at Atlanta. If you didn’t have Kevin Harvick in your DraftKings lineup and still somehow ended up cashing out, consider yourself incredibly lucky.

But now, NASCAR heads to Las Vegas Motor Speedway this weekend for the Pennzoil 400. Intermediate tracks are where the most precise strategy is needed. The factors that go into building a winning fantasy team are much different than those at a superspeedway or short track.

First off, it is important to find at least one dominator, a driver who leads a chunk of laps and records the most “fastest laps” in a given race. DraftKings awards .25 points per lap led and .5 points per fastest lap. In 2017, Martin Truex Jr. swept both of the first two stages and ended up winning the race. He led 150 of the 267 laps, recording 62 of the fastest laps. In that race, he was the only dominator, standing out above the pack.

In 2016, there were two drivers to lead over 70 laps, but in 2015 there was again one single dominator. So pick wisely! That one selection could give you a huge advantage over the rest of the fantasy field.

Like Atlanta, Las Vegas is also a track where practice times translate well to race results. Be mindful of that throughout the race week leading up to Sunday’s main event.

Here are a few drivers to keep an eye on for the Pennzoil 400.

Truex was the first driver to sweep a race in the new stage racing format last year. As mentioned before, he was the top dominator at Las Vegas in 2017. The reigning Cup champ was also the king at 1.5-mile tracks in his title-winning season; seven of his eight wins came at this type of oval.

The biggest hurdle for Truex this week will be passing pre-qualifying inspection. Once the No. 78 does that, all bets are off as anything less than a win would be a big disappointment.

Harvick was locked in last week at Atlanta and led 181 laps en route to the win. While Vegas’ track surface is more smooth, not as demanding on the tires, it is still similar to Atlanta in size and shape. We could very well see another great race from Harvick.

Ford as a manufacturer is off to a hot start, with the other two playing catch-up. Can they go two-for-three with a victory out in Sin City?

Keselowski’s track history at Las Vegas makes him an early favorite to win Sunday. He has four top-five finishes in the past five races there, a total which includes two wins. He has also led laps in the past six races out in Vegas. Don’t hesitate to bet on the Blue Deuce, especially after a strong top-10 qualifying effort.

Despite being the point leader, Logano may fly under the radar this weekend. Just don’t overlook him on your roster.

Logano has the best average finishing position of all active drivers here with four straight top-10 results. He led 74 laps in 2016 and finished second. Then, in 2017, he followed that up with a fourth-place performance. The No. 22 doesn’t have quite the same success as Keselowski but is a good secondary pick if you can’t snag the No. 2.

In two races run this season, Hamlin has been extremely competitive. He led 22 laps at Daytona and finished third. At Atlanta last weekend, he ran fourth after leading 26 laps.

Hamlin has also been a top performer at Las Vegas. He has the fourth-best average finish among active drivers at the track over his 12 career starts. He is $800 cheaper than teammate Kyle Busch and has been the more consistent driver to date.

Blaney is also running the NASCAR XFINITY Series race on Saturday, an event in which he finished second in 2015. That will give him more seat time than most of the field this weekend, leaving him better prepared for a run at the checkered flag.

At $8,700, Blaney can be paired in a lineup with either Truex or Harvick and still leave room for a solid roster.

McMurray’s price this week is much lower than it should be, so take advantage. He finished eighth in this race a season ago and has an average finish of 12.6 over the past five races here. That is four positions better than his career average, ranking him fifth among active drivers.

A 22nd-place qualifying effort should make him a lock for your roster. Look for McMurray to move through the pack and score you some extra points in the process.

DraftKings still hasn’t caught up to the fact that Menard is no longer driving for Richard Childress Racing. Jump all over his sub $7k price. With the Wood Brothers, he is set up for success, especially at his bread and butter: intermediate tracks.

Menard should easily be able to maintain or beat his 16.7 career average finish at Las Vegas this weekend. Jump on board his solid start driving the No. 21 Ford. 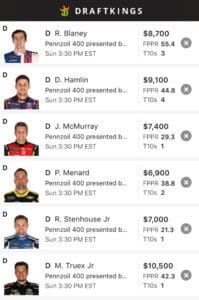