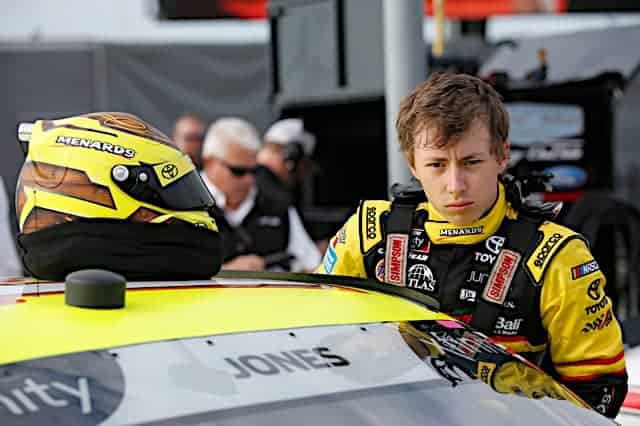 In 2017, Brandon Jones experienced the ol’ sophomore slump with Richard Childress Racing. This year brought a new opportunity as he jumped ship to Joe Gibbs Racing in the No. 19 car.

Coming off a solid rookie season in 2016 and finishing 10th in the NASCAR XFINITY Series championship standings, 2017 was a tiring year for the Georgia native, claiming a trio of top-10 finishes. That’s right — one year after posting 12 top 10s, Jones only managed to record three in 2017, thus needing a change.

Matt Tifft and Jones essentially traded positions, as Tifft hopped from JGR to RCR for this season. But when it comes to Jones, he’s already feeling comfortable being with Toyota.

“That’s new to myself – working with Toyota Racing Development and working with that brand specifically, and it’s great to be a part of,” Jones told Frontstretch regarding 2018. “They have so many tools and simulators to use and that’s something I’ve already taken advantage of. Another thing is studying these races. That’s something that I never really did in the past. I didn’t really know how to study, but Chris [Gabehart, crew chief] has been helping me learn how to study and he’s been good with that and giving me some tips on how to do it.”

Jones kicked off the season with a 10th-place finish at Daytona International Speedway. This past weekend at Atlanta Motor Speedway, the No. 19 team overcame a flat tire during the second stage to place 17th, one lap off the pace.

Over the past handful of seasons, JGRʻs XFINITY program has acted a springboard for Erik Jones and Daniel Suarez to jump into the Monster Energy NASCAR Cup Series. Because Jones, no relation to Erik, has raced with his new teammates in the past, he’s finding it easy to fit in with JGR.

“I’m familiar with everyone, but getting to know them personally that’s something I’m new to because I’m on the same team with them,” Jones said. “You’ve got to take advantage of what they have — the Cup lineup of Kyle Busch and Denny Hamlin — because those are some of the best in the sport right now. You’ve got to lean on them and there are little things that can play big dividends.”

In 73 career XFINITY starts, Jones has 18 top-10 finishes, posting his lone top-five effort in 2015 in a part-time schedule with RCR. But now that he’s with JGR, it’s about having the fresh start he needed to get his career back on track after a challenging 2017.

“Absolutely,” he said on if he needed a fresh start. “It’s funny. We talked about it a little bit and refer to it as the sophomore slump and I think we’re out of that. This is my third year in the series, so I’m fresh on the tracks and have an idea of where I need to be on all the racetracks.

Jones admits that there is pressure to perform, especially when JGR added reigning Camping World Truck Series champion Christopher Bell to the driver lineup this season. In Bell’s fifth career XFINITY race last season, he was victorious at Kansas Speedway.

One thing that the 21-year-old plans to work on is restarts, and being aligned with JGR and Busch could propel him into the right direction.

“If you watch any race from the past, restarts are where you win the race,” Jones said. “If you pass two guys here, they can never pass you back. Restarts are big, and looking on pit road is something I need to work on a lot as well.

“Also adapting to a new line on the track, so not specifically just sticking to the bottom on some of these tracks. I need to know when to start moving around and when the tires wear out, so you know when to start searching. Driving a car is not to hard, it’s the little things that you have to pick out.”

Team owner Joe Gibbs could have chose any driver to take over the No. 19 ride, left vacant by Tifft. However, Jones believes this was a match in the making and he must have proved something to Gibbs coming up through the NASCAR ranks.

“I think he saw a little bit of potential there,” Jones said. “I don’t think you want a guy on your team that’s going to make you look bad and drive your cars into the ground, so obviously he saw what we’ve done in the past in the Truck Series and the ARCA Series and they are into developing the up and coming drivers, too.

“If I end up being a big Cup star one day, I guess it will pay off for him as well. It will be interesting to see at the end of the year. I’m going to do a halfway assessment of myself on kind of how it’s going and what I’m doing on the track.”

Regarding the future, Jones doesn’t know what it holds, but hopes to stay with JGR long-term. Two years ago, the No. 19 team won the series championship with Suarez.

“We put ourselves in the best position possible and this team has been so successful, so that’s what we looked at when we were out a little bit,” he said. “Thankfully we were in the spot and able to take it, so that’s how it happened.”