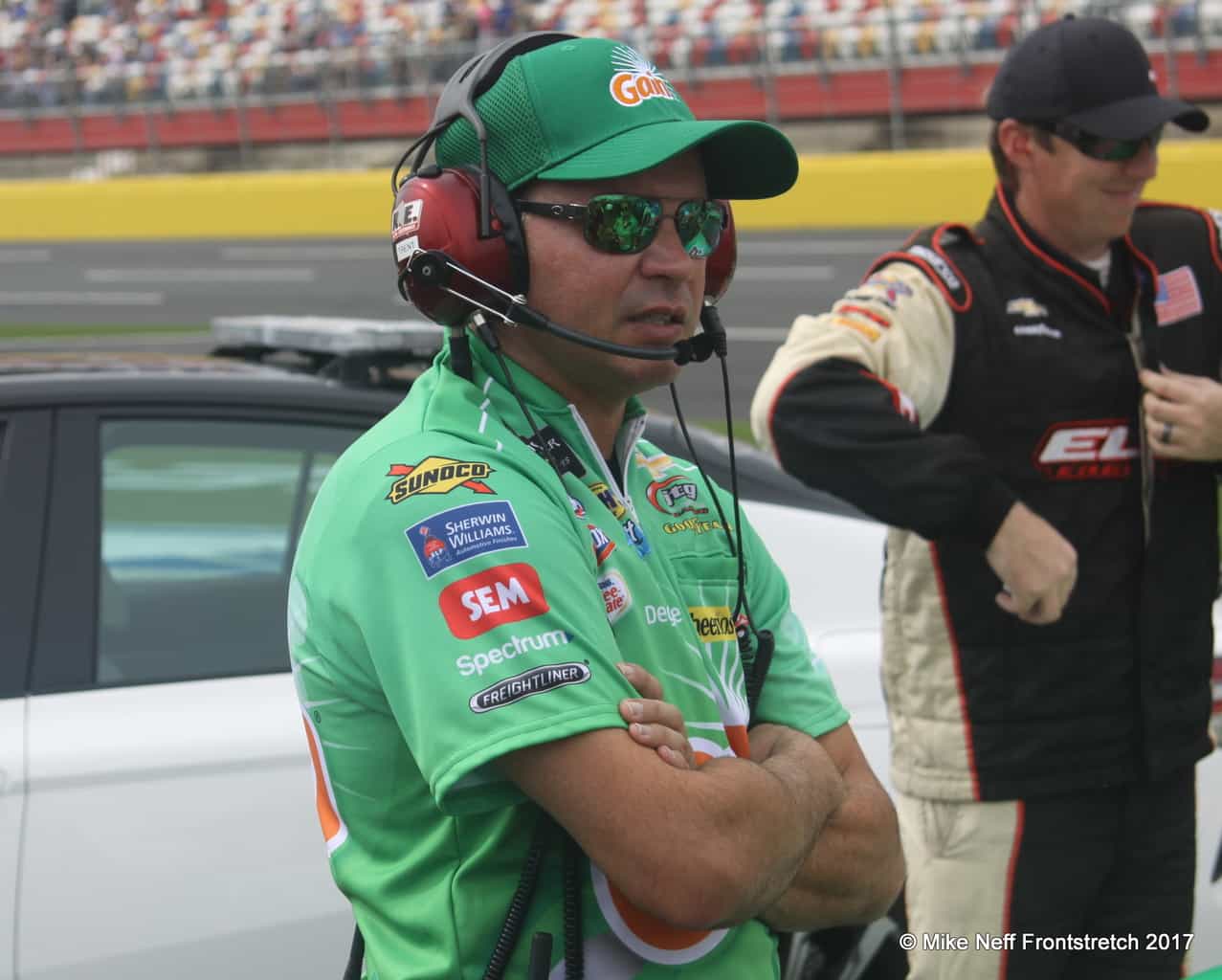 The first two races of the 2018 Monster Energy NASCAR Cup Series season are in the books, and now the teams are packing up their games and heading out west.

Last weekend’s race at Atlanta Motor Speedway was a more accurate picture of what most races on the 2018 season will look like than the season-opening Daytona 500, with more pit stops and tire wear. Trent Owens and his crew for Chris Buescher experienced some growing pains on that front with loose lugs at Atlanta, which hurt their finish.

In preparation for Las Vegas Motor Speedway, Owens is looking at focusing on getting his car through the bumps in Turn 1 at the intermediate track. He’s also looking out for ways to build grip into his car on a track that gets very slippery when the sun comes out. He also gives some insight into the logistics of the West Coast swing and the challenges of the new pit gun rules for teams in 2018.

Mike Neff – How do you feel like your Atlanta race weekend played out?

Trent Owens – A lot better than where we ended the season at Homestead-Miami [Speedway] performance-wise, so from that standpoint it was really good. Unfortunately on the finishing position, it wasn’t where we wanted to be. We had a loose wheel under green flag stops and had to come in twice. That put us a lap behind where we were running otherwise. Salvaged a 25th but should have ended up 18th or 19th. Happy about the performance of the car.

The weekend went well, and we made good changes in practice. Just have to clean up some things execution-wise and we’ll start getting some better finishes.

Neff – Goodyear brought the dual zone tire to Atlanta again. Some crew chiefs have had issues with how they wear and the consistency they maintain. They seemed to be a non-story this past weekend, though, right?

Owens – I thought the tires held up very well. With the surface as worn out as it is, the time falloff is pretty great. The speeds are kind of slow for an intermediate, so it was a challenge to determine how much air you could take out of the tire without damaging the sidewalls. For the most part, the tires held up well. We saw some light cording on the competition caution stop, but by the second stop the track had rubbered up enough to where tire wear wasn’t a problem.

Neff – When you unload at Vegas, what is the first thing that you’re going to attack as you hit the track?

Owens – Just getting through the bumps as you enter Turn 1 on the low side. If your car isn’t going through those bumps, you have to drive around them all weekend. If you can get through there anywhere on the racetrack that you want, you’re going to be one of the better cars, so that is a focal point. Weather is also a focal point. Even though the track was just recently repaved, when the sun comes out they have such a hard tire for that track with the speeds we hit when the track warms up, it can be hard to get a hold of from the grip standpoint. It is definitely one of the more temperature-sensitive tracks.

Really, it is just mainly driveability through the bumps. You want to be able to use wide open throttle as much as you can.

Neff – We have a rule this year where engines have to run for more than one race. Has that changed anything about your configuration this year? Have the builders given you engines where you can still run the same gears and RPMs that you ran last year?

Owens – They really haven’t. We lease our engines, we don’t build our own, which most teams in the garage are that way now. We get a mileage limit; we can only do a certain number of miles or laps on a given weekend. It is pretty easy at Vegas. At Daytona, with all of the practice time you have, you could get yourself in trouble. They just backed up their mileage limits a little bit for practice.

Owens – Very much so; I am a big fan of the new system. The alignment process of the new system is far better than the old system, as far as repeatablility. I think it is the right way to template racecars. I know, as we move forward, there are some other things we’re going to need to get control of that maybe this scan doesn’t pick up. For the most part, I think it is a better equalizer. It helps smaller teams like us, on our production side, to build more consistent racecars. I think it helps both parties.

Neff – We saw a couple of teams already have some serious issues with the process. Last year they started making teams go through the whole process if you fail. Is that still the policy for this season?

Owens – Yeah, pretty much the same. They’ve just gotten stricter about penalties; they are more severe now. After you fail a fourth time you lose employees, and you aren’t able to replace those employees. I think they got steeper with the penalties. You’ve seen some problems with teams in qualifying tech.

It is a tougher system. Teams are going to look for where the line in the sand is drawn and push the limits. We all have to push the limits to get performance. By mid-season some of that will clean up. I am a fan of the system right now. I think it is working. We’ll see what it looks like mid-year.

Neff – You have one less crew member going over the wall this season for pit stops. Have you been experimenting during these first two races with different assignments for different crew members?

Owens – We tried it over the winter. The pit stop stuff has been a challenge. I understand all of the reasoning; I’m not going to argue that at all. We looked at it and decided [that] if we don’t make mistakes and just do clean stops with one way to do the stop every time throughout the season, we’ll be OK. It isn’t as much physically challenging right now as it is mentally challenging, if you have a bunch of different plays. So we’re just going to do one pit stop and we’re going to try not to make mistakes [and] then build on that going forward.

I noticed that a lot of teams seemed to pick up time at Atlanta just based on what they learned at Daytona. We’ll study that and try to learn some things that way. It will be interesting to see how the pit gun situation develops and if we make some changes to speed them up a little bit. That part will be interesting.

Neff – NASCAR gives you three pit guns to start the race. If you have a gun malfunction, do they bring you a replacement so you still have three in the box?

Owens – Yes, they have enough guns to replace them. Me being a crew chief and trying to call a race, the worry for me is we’re in the second race and we’ve had quite a few gun failures. That is a little worrisome for me. I didn’t expect to see failures until we had a few more races on them. That is a little scary in itself. As for inventory, they have enough to do what we need. That doesn’t replace a gun going down in the middle of a stop.

Neff – Does NASCAR rent the guns that they require you to use on the race weekend?

Owens – Yeah, I’m not on the business side, but it is definitely a lease. We do not take ownership of the guns. We purchase our practice guns, but the ones that we use for the race are leased per event, and the maintenance and management of the guns is handled by a separate company, not the race team themselves. That was one of the reasons for the whole rule… to take the building and maintenance of the guns out of the hands of the teams. We lease the guns on the weekend. I haven’t looked into it enough to know if we get the same guns every single weekend or if it is random; I haven’t looked very far into it. We have a pit crew coach who handles that whole situation, but I might need to ask.

Neff – When Vegas is done are you heading back to North Carolina, or are you staying out west for all three weeks of the swing?

Owens – I am staying out there. I left for Vegas on Thursday morning, and I won’t come back home until after the [Auto Club Speedway] race. While we are practicing for Vegas on Friday, the Phoenix primary car will be loaded onto a four-car hauler that will end up meeting us in Vegas on Sunday. We’ll spend Monday in the garage at Vegas preparing the Phoenix car and getting it loaded onto the primary hauler, which will stay out West all three weeks. The same thing will happen again next week when the California car gets to Phoenix.

Logistically, it is harder. I stay out there with two mechanics and the primary hauler. I rotate the mechanics over the two weeks. It is just the easiest thing for us to do, especially being a small team, traveling back and forth that far.