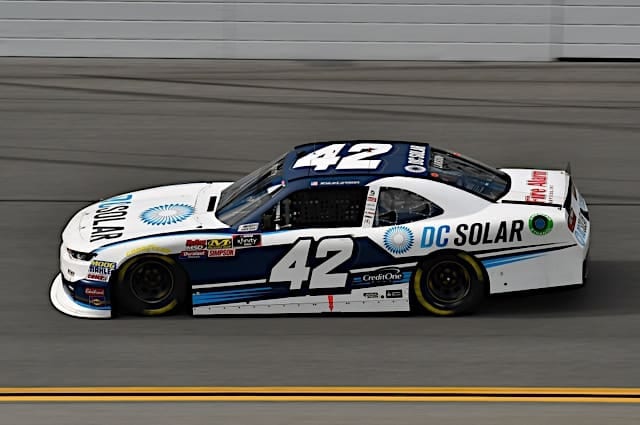 Nobody was faster at Las Vegas Motor Speedway than Kyle Larson on Friday in practice.  Earlier in the day, Larson topped the charts in the first Monster Energy NASCAR Cup Series practice session.  He followed that up being quickest in both XFINITY Series sessions.

Larson topped the early session with a lap of 30.070 seconds (179.581 mph), half of a tenth of a second faster than Team Penske’s Ryan Blaney.  Joe Gibbs Racing’s Kyle Busch was third fastest.  Christopher Bell was the fastest XFINITY Series regular in fourth, while Cole Custer was fifth.

JR Motorsports teammates Tyler Reddick and Elliott Sadler were sixth and seventh, followed by Richard Childress Racing’s Matt Tifft.  Austin Dillon in the No. 3 Chevrolet was ninth and Daniel Hemric was 10th.

The first session saw only 28 of the 40 teams entered venture onto the 1.5-mile tri-oval.  Many of those who ventured out ran limited laps.  Larson focused on qualifying runs and only ran six laps in the session.  Tifft completed the most laps with 31.

Only three drivers completed a 10-lap run in the session.  Of those three, Reddick was fastest with an average time of approximately 30.632 seconds (176.284 mph).  That time was nearly two-tenths of a second faster than Michael Annett.

As the day wound on, the temperatures slightly increased and the winds kicked up.  However, nothing could keep Larson off the top of the chart.  Larson turned in the fastest time of the day, a lap of 30.002 seconds (179.988 mph) to lead the session.  Larson’s time was more than one-eighth of a second faster than Blaney.

Reddick was third quickest, followed by Bell and Hemric.  Dillon was sixth, followed by Annett and Busch.  Custer and Sadler were ninth and 10th.

The second session saw teams focus a lot more on longer runs.  Eight different drivers turned in more laps than the 31 that Tifft ran in the first session.  Reddick’s 38 laps were the most laps completed in the session.

Larson’s dominance was not contained to qualifying runs.  He turned in the fastest 10-lap average of the session as well.  Larson’s average lap time of approximately 30.320 seconds (178.099 mph) would have been good enough for seventh on the speed charts.  Here, it was more than a tenth of a second per lap faster than Blaney.  Reddick had the third quickest 10-lap average, followed by Busch and Justin Allgaier.

Qualifying for the XFINITY Series Boyd Gaming 300 is scheduled for 1 p.m. EST on Saturday.  The session will air live on FOX Sports 1.