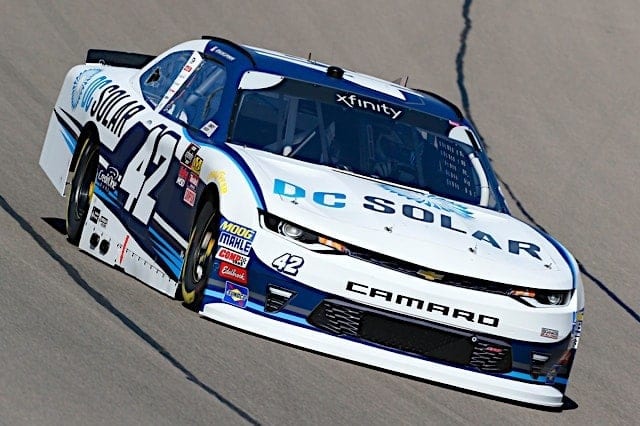 Kyle Larson picked up his first NASCAR XFINITY Series win of 2018 on Saturday (March 3) in the Boyd Gaming 300. He held off Christopher Bell on a restart with seven laps to go to cruise to his first win at Las Vegas Motor Speedway.

“I wasn’t sure if [Bell] got a wheel spin or if I just got a really good push,” Larson told FS1. “Justin [Allgaier] did a great job pushing me that last start.”

Bell held on for second place, while Allgaier, Ryan Blaney and Elliott Sadler rounded out the top five. Sadler has now opened the season with three-straight top-fives.

Daniel Hemric was sixth, followed by Brandon Jones. Tyler Reddick finished eighth despite hitting the wall early on and worrying about his engine. Cole Custer and Spencer Gallagher were ninth and 10th.

The stat sheet shows a dominant day for Larson — he won Stage No. 2 and led 142 of the 200 laps — but the Monster Energy NASCAR Cup Series regular needed the Vegas-type luck to capture the win.

The leaders pitted after Austin Cindric got loose and wrecked on lap 134. When the race restarted with 62 laps to go, Larson charged back from seventh to blow past Allgaier to reclaim the race lead but burned a lot of fuel in the process.

A few laps later, Larson asked No. 42 crew chief Mike Shiplett if he could make it the rest of the way on fuel and the response was a stern “no.”

Larson continued to pace the field. The race stayed green for the next 46 laps and it appeared that Larson would not make it the distance without running out.

“I was just saving fuel that whole run just in case it went green,” Larson said.

The team caught a huge break when Ryan Reed blew a tire and hit the wall with 16 laps to go. All of the leaders pitted during the caution, and after two successful restarts and enough fuel to make it, Larson gapped Bell for his ninth career win at eight different tracks.

“I wish it could have gone green I guess just because it would have been interesting to see if I could finally win a fuel mileage race, but all in all an awesome day,” Larson said.

The day was dominated by drivers with dirt racing backgrounds. Larson and Bell battled hard throughout Stage 1, with several slide jobs and crossovers taking place. Bell got the better of Larson to win the opening stage but fell back in the middle of the race before recovering to his runner-up effort.

“I hope Pete Willoughby and Keith Kunz were watching this because they were the two that put both me and Kyle [Larson] on the national scene,” Bell told FS1. “It’s really cool to be able to run 1-2.”

Las Vegas native Kyle Busch was one of the favorites to win the race and he was going for a weekend sweep after winning Friday night’s Camping World Truck Series race at Las Vegas. However, Busch was never more than a top 10 car.

Busch’s frustration showed when he was attempting to pass his teammate Jones for eighth. The two rubbed each other a few times and Busch gave Jones a gesture out of the window signifying that he was not happy with his teammate.

Busch pitted early on the race’s last long green flag run to try to get an edge on Larson but was hit with a penalty for improper fueling. The NXS all-time wins leader fought back to just get back on the lead lap and finish in 14th.

Reddick and Sadler are now tied at the top of the point standings, but Reddick gets the tie-breaker thanks to his win at Daytona International Speedway.

Next week, the XFINITY Series heads to Phoenix for the DC Solar 200 at the recently re-christened ISM Raceway.