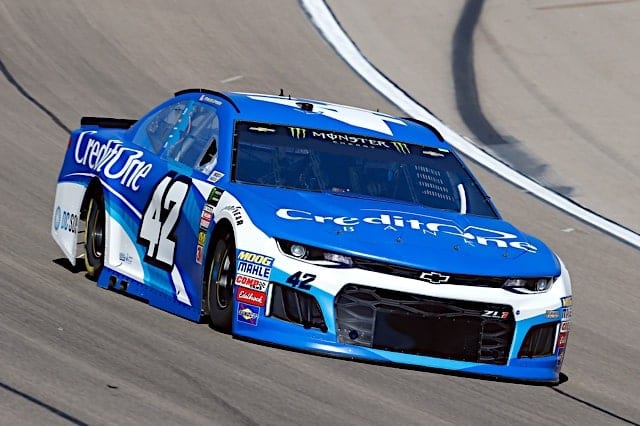 The Monster Energy NASCAR Cup Series was back in action Saturday (March 3) for two rounds of practice in preparation for Sunday’s Pennzoil 400 Presented By Jiffy Lube at the Las Vegas Motor Speedway.

Kyle Larson posted the quick time of the initial session on the 1.5-mile oval. His Chevrolet Camaro topped the charts with a lap of 187.558 mph, just ahead of the Richard Childress Racing Chevrolet of Ryan Newman. Jimmie Johnson, who has suffered damage in every race this season was third quickest. Last week’s winner Kevin Harvick and Alex Bowman rounded out the top five.

Ryan Blaney was sixth fastest, followed by Darrell Wallace Jr.  Clint Bowyer was eighth, while Michael McDowell turned a few heads as he put up the ninth-quickest time. Martin Truex Jr. was 10th.

The only incident in the opening round was a brake duct unraveling on Denny Hamlin‘s Joe Gibbs Toyota. Hamlin was able to get to the garage without damaging his car but did cut his right front tire in the process.  A brief red flag was displayed due to debris from Hamlin’s car.

Round No. 2 of practice was paced by Blaney in his Pennzoil/Menards Ford for Team Penske. Blaney, who will start on the pole Sunday, topped the leaderboard with a lap of 186.445 mph. Second quickest was Larson, followed by Chase Elliott, Truex and rookie William Byron.

Newman was sixth fastest, followed by Brad Keselowski and Daniel Suárez. Joey Logano and Erik Jones were ninth and 10th.