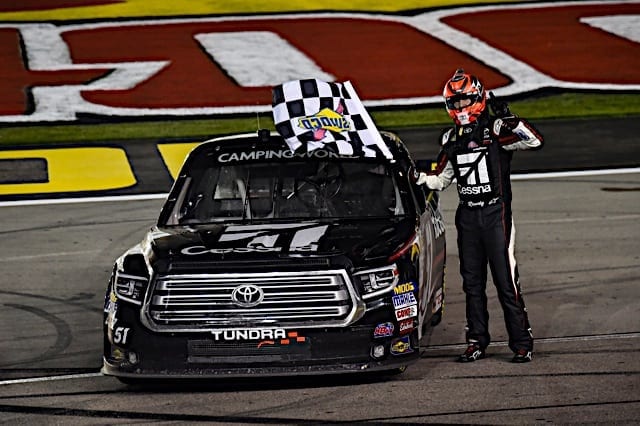 In a Nutshell: Kyle Busch scored his 50th career NASCAR Camping World Truck Series victory Friday night at Las Vegas Motor Speedway. The driver of the No. 51 Toyota led the final 15 laps of the Stratosphere 200 en route to a 0.437-second victory over Johnny Sauter. Last week’s winner, Brett Moffitt, ran third after a spirited effort to pass Busch down the stretch. Grant Enfinger and Stewart Friesen rounded out the top-five finishers.

Who Should Have Won: Busch didn’t have the field covered nearly as well Friday night as he did last week. That’s when he absolutely dominated in Atlanta before the left rear wheel fell off of his truck, costing him the victory.

But he still had the best truck overall at Las Vegas. He bested multiple series regulars side-by-side up front and led a total of six times for a race-high 55 laps.

Justin Marks, who hasn’t made more than a single NASCAR Camping World Truck Series start in a season since 2011, returned to the division Friday night. Though he runs full-time in the IMSA WeatherTech SportsCar Championship, Marks made time to pilot the No. 54 Toyota at Las Vegas Motor Speedway for DGR-CROSLEY.

“The Truck Series has always been one of my favorite in all of racing in America,” said Marks. “The opportunity to drive for DGR-CROSLEY came pretty late but everything that David [Gilliland] and Bo [LeMastus, President of Crosley Sports Group] have done to build a competitive operation made it a very compelling situation to get back in a truck. All the pieces are there for us to have a great night and a great result for the Crosley Toyota.”

After leading the series’ opening practice session and running 10th-quickest in the final one on Thursday, Marks backed it up with a seventh-place qualifying effort. On the initial start, contact with John Hunter Nemechek created a tire rub that ultimately came back to bite Marks in the form of a lap 16 spin.

However, Marks avoided major damage to his truck and continued on. Benefitting from two free passes on the night, the veteran fought back and ultimately ended the race in 11th.

Fun night in the @DGR_Racing Crosley truck. It was fast, just need to get used to this craziness again! Tough group to race. Thx to the team for digging hard and having a great attitude. Hope to do more!

When Stewart Friesen first entered the Truck Series, no one really paid him much attention. Always running toward the middle or back of the pack, it wasn’t until the series headed to Eldora Speedway last season that people took notice of him. Friesen started on the pole, led 93 laps and finished a strong second.

But other than that dirt race, the No. 52 team was mediocre, at best. Halmar-Friesen Racing found itself second tier behind the multi-car giants of the Truck Series.

That’s when they decided, if you can’t beat ’em, join ’em. Enter an alliance with GMS Racing. After a split with Tommy Baldwin Racing, Halmar-Friesen took a couple races off to put the new technical alliance in place.

Since then? It’s been a stirring step up in performance. In the 10 races post-alliance, Friesen has posted six top 10s, including a sixth last weekend at Atlanta and a fifth Friday night at Las Vegas. But the fifth-place result doesn’t tell the whole story. Midway through the second stage, the driver of the No. 52 Chevrolet made a daring three-wide pass that gave him the lead. It was a spot he held for 31 laps, including an impressive second stage win.

During the final stage, Friesen faded a bit. But a top-five finish is clearly nothing to be ashamed of. Friday night, the driver showed he’s a new name to keep an eye on this season.

What an amazing truck the @HalmarRacing team gave me @LVMotorSpeedway ! I also have to thank all the fans who continue to support me and the whole 52 team!

Since finishing 27th in the season opener at Daytona, Friesen has climbed from 20th in the standings all the way up to sixth. Now, it’s way too early to even consider Friesen a championship contender by any means. But given the performance he’s put on the last couple of weeks, it’s possible he could enter that conversation by the time the playoffs come around.

No. of rookies to finish in the top 10: 2; Dalton Sargeant, finished sixth; Justin Fontaine, finished ninth

Rookie of the Race: Dalton Sargeant

Points Update: After finishes of first, second and second to start the year, Johnny Sauter maintains a commanding 39-point lead over Brett Moffitt in the standings. Grant Enfinger sits one marker back in third while Noah Gragson and Ben Rhodes round out the top five.

Stewart Friesen, who finished fifth, is sixth in the standings; he’s also 47 points behind Sauter. Spencer Davis, who’s running a part-time schedule this season is seventh, followed by Dalton Sargeant. Matt Crafton and Myatt Snider round out the top 10 in points three races in.

“It’s pretty awesome, just great team – everybody at Kyle Busch Motorsports and Rowdy Manufacturing, can’t say enough about this Cessna Toyota Tundra. Really, really fast and I felt like we were just struggling a little bit on the long run. (Mike) Hillman (Jr.) kept making changes on it all night long and he made it better each and every pit stop. Thanks to Camping World and the fans and, of course, all these guys, everybody on this team. They’ve all done a great job and it’s fun to win these races, especially with your own team and being with these guys. We’ll go celebrate tonight and one of our partners, Incredible Bank is here with us tonight and we appreciate them.” Kyle Busch

“When you don’t win, what’s there to be happy about? I thought that lapped truck would stay out of the way there, and I was trying to run the middle and get one last shot at Kyle.” Johnny Sauter

“When the 13 (Myatt Snider) pulled out from the pits a couple laps down and side-drafted us for the lead and it allowed Kyle (Busch) to close in I tried to go to the bottom of a lapped car and he turned down into us. It’s just frustrating because when you’re out of the race you shouldn’t get in the way of the leaders. It was fun out there racing Kyle and we had a strong AISIN Group Toyota Tundra, just can’t thank TRD and all of our partners enough for getting us here. It’s just a bittersweet race.” Brett Moffitt, finished third

Up Next: The Camping World Truck Series takes a couple weeks off before heading to Martinsville Speedway on Saturday, March 24. Coverage for the Alpha Energy Solutions 250 begins at 2 p.m. ET on FOX Sports 1. The race can also be heard on your local MRN affiliate or SiriusXM NASCAR channel 90.

In other sporting news… LA Dodgers Clayton Kershaw went to the local high school striking out all 27 batters he faced , in route to padding his high school pitching record for strike outs. Weather at 11.

Taking candy from the babies, the Shrub pads the numbers.

Now comes the off-season within the truck season interrupted briefly at Martinsville in a few weeks.