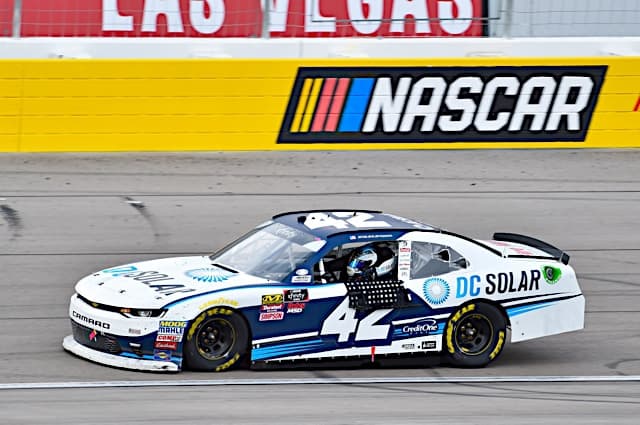 Whenever a racetrack has tire wear, Kyle Larson pops to the top of a lot of people’s minds regarding a potential race winner. In Saturday’s Boyd Gaming 300, the No. 42 Chevrolet led 142 laps en route to his first career victory at Las Vegas Motor Speedway.

Larson started from second, and it didn’t take him long to pass Christopher Bell for the race lead. However, the two dirt racers performed slidejob after slidejob on each other. Eventually, the rookie driver was able to get past and clinched a playoff point by winning the opening stage.

Once Larson got out from in clear air during the second stage, he was long gone. The final stage was a bit more challenging as the No. 42 crew had a bad pit stop with 65 laps to go, losing six positions on pit road. By using the high line, and three-wide passes, Larson was in the lead in no time and was hoping to have enough fuel to the finish.

The yellow flag flew with 16 laps to go, allowing all teams to come down pit lane, where Larson’s crew serviced his car quick enough to get him out second. On the resuming restart, the No. 42 got one helluva restart, en route to his ninth career XFINITY Series victory.

“This racecar was so fast,” Larson said of the victory. “It was fast last year, but you never really know because this was my first time with this [composite] body, and it performed well. Happy about that, great day.”

Larson has competed in two of the three events to start the 2018 season and has led the most laps in each race respecitvely. At Daytona, the No. 42 car utilized the draft to lead 61 circuits, only to get crashed out in the second overtime.

Bell finished the day in the runner-up position, while Justin Allgaier, Ryan Blaney and Elliott Sadler rounded out the top five.

Through three races, XFINITY Series regulars have come out to play with the Cup Series drivers in 2018 and it’s cool to watch.

Sure, Larson has led the most laps at Daytona and Las Vegas, but he had to earn the victory on Saturday, passing Tyler Reddick on a late race start. At the season-opening event at the World Center of Racing, it was Larson who got involved in a late incident, while Reddick went to Victory Lane.

At Atlanta, Kevin Harvick put a stomping on the field, though it was expected. The 2014 Cup Series champion led 141 of 163 laps en route to his first XFINITY Series victory since 2015.

In Saturday’s Boyd Gaming 300, XFINITY Series drivers took eight of the top 10 spots, with Matt Tifft finishing 11th before another Cup Series driver crossed the finish line in 12th. That’s coming off a week that had XFINITY drivers filled positions three through 12. And at the crap shoot in Daytona, XFINITY teams made up 10 of the first 11 positions with Daniel Suárez finishing eighth.

Despite only leading 65 of the 506 laps run this season, XFINITY drivers are finishing toward the front more. Sure, that could be due to the new rule NASCAR installed at the beginning of the season that allows Cup drivers with at least five years of experience to only compete in seven XFINITY races, but the series regulars are hanging around the top. Don’t be surprised to see a bunch get to Victory Lane soon.

It’s never a good scenario to beat and bang with a teammate, but during the final stage, Joe Gibbs Racing teammates Kyle Busch and Brandon Jones were swapping paint toward the back half of the top 10.

Jones, new to JGR, arguably had the best overall race since his rookie season in 2016. At the end of the second stage, he was running ahead of Busch and Bell, becoming the highest running JGR Toyota. But after pit stops, things got interesting.

Busch had a big run coming off Turn 4 and down the frontstretch when Jones went to side draft the No. 18 machine. The JGR duo made contact, putting a big ole tire mark on the drivers’ side of the No. 19 machine. The 2015 Cup Series champion was none-too-pleased with his younger teammate, giving him a hand gesture down the backstretch.

Las Vegas marked the first time these two drivers were competing on the track as teammates, and neither gave an inch. It’s possible that Jones felt he needed to earn the respect of Busch, but pissing off the hometown driver may not have been the right decision.

For the second time in three races, Austin Cindric crashed out, both while running the No. 60 Ford for Roush Fenway Racing. Last week at Atlanta Motor Speedway, the rookie driver finished seventh for Team Penske.

Unlike Daytona, when Cindric wrecked 10 laps in, he made it until 67 laps remaining in the event, and the incident wasn’t entirely his fault. He and teammate Ryan Reed had a huge run on the lapped car of Tommy Joe Martins when the No. 60 car made contact with the No. 8, causing Cindric to spin down the backstretch into the inside wall.

“My biggest job is to bring the car home in one piece and I probably didn’t do all I could do to accomplish that today,” Cindric said after the incident. “I hate to have two races with these guys in the [No.] 60 and not bring a car home. That will be my focus, get some experience and learn. We did learn some things that hopefully we can bring back here for the playoffs.”

While competing for any kind of NASCAR championship, its never good to have two DNFs in the opening three races. However, Cindric will get the chance for redemption over the next two races, as he’s in the No. 60 car at Phoenix and Auto Club Speedway to round out the west coast swing.

2017 was a year Spencer Gallagher would like to forget in his rookie season of XFINITY Series competition. Meanwhile, 2018 has been a year of redemption, at least through the first three races.

Gallagher kicked off the season with a career-high sixth-place finish at Daytona, following it up with a 14th in Atlanta. On Saturday, the No. 23 car ran just outside the top 10 for much of the 300 miles, but with a couple of late race restarts, he was able to pick up a 10th-place finish — his second top 10 of the season.

Last season, the newly formed GMS Racing XFINITY team had one top 10 for the entire 33-race schedule. Gallagher has already bettered that three races in, and currently sits fifth in the series standings.

Through three races, it seems as though Gallagher and Chad Norris, new crew chief to GMS Racing have found early chemistry, as last year the No. 23 would get off to a good start and fade late in the race. Thus far, it’s been a complete 180 degree turn, but we are only three races in.

Larson dominated the event, and for most of the day Blaney was a close second. There are a few instances where the duo made bold moves to pass one another, specifically when the No. 42 was on a hard charge after his pit crew messed up with 65 laps to go. Each of these drivers earned a top-five effort.

Former Las Vegas victor Austin Dillon ran outside the top 10 throughout the race, finishing in 12th.

Busch may have had the most surprising race, at one time running two laps off the pace. The No. 18 car managed to get back on the lead lap, only good enough for 14th. It marks the worst finish for the Las Vegas native at his home track since 2012, finishing 33rd.

“I was happy with how much speed we have. We will be able to build off that. We definitely wanted more but the restarts just weren’t there today.” – Cole Custer

“Kaz [Grala] didn’t really do anything wrong and I told him that. He crossed me up. All I was telling him was that we are team cars, we work together so next time just give me a quarter car or something, a little more breathing room. He doesn’t have to. That is racing and that is part of it but as Ford teammates, I would do it for him, just a little bit of mutual respect.” – Ryan Reed

“It is just a shame our race is over so early. I got a good run off Turn 4 and thought I had a little more room.” – Dylan Lupton

Overall, no one had anything for Larson. The No. 42 car dominated the event, and even when the pit crew had a miscue on pit road with 65 laps to go, it took Larson less than 20 laps to retake the lead.

Through three races in the 2018 season, the XFINITY Series regulars have one victory, but have kept up with Cup regulars with nine of the top 11 positions on Saturday. The series will remain out west for the second of three consecutive races next week, going to a racetrack where XFINITY drivers dominated last year.

Next weekend the XFINITY Series takes to ISM Raceway, formerly known as Phoenix International Raceway for the fourth race of the 2018 season. Allgaier is the defending winner of the event, leading a race-high 85 laps en route to his first victory in five years.