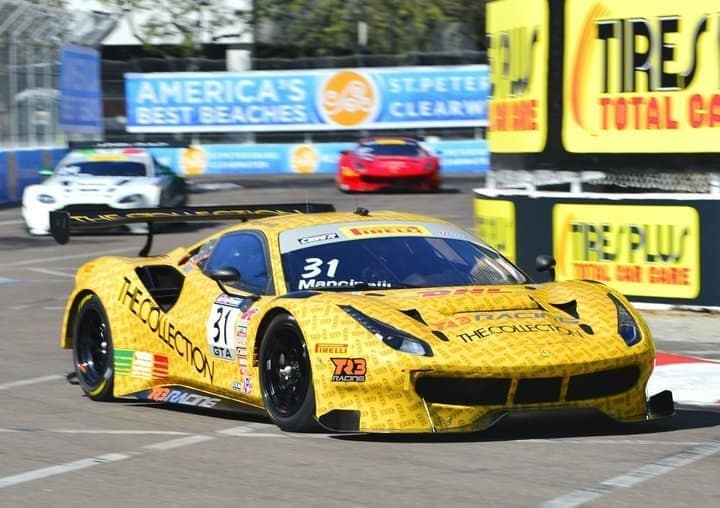 For 2018, there has been a move away from factory efforts in Pirelli World Challenge.  The best place to see where that effects the series are the raw car count numbers.

Last year, the season opening Grand Prix of St. Petersburg attracted 25 entries combined between the GT, GTA and GT Cup classes.  This weekend, there will be only 12 teams in those races.

The pro division has eight entries.  Five of those, including TR3 Racing’s Daniel Mancinelli (pictured above) were in the race last year.  Callaway Competition USA makes their series debut with Daniel Keilwitz, but the fact that the team nixed their second car for Michael Cooper due to construction delays is very noticeable.  Pfaff Motorsports steps up to the GT class for the first time with a Porsche 911 GT3 R for Scott Hargrove, while Alegra Motorsports moves from the IMSA WeatherTech SportsCar Championship with Michael Christensen driving.

The GTA subclass has only four entries.  K-PAX Racing’s second car will be driven by Rodrigo Baptista, who won three races in the GTS class in 2017 for Flying Lizard Motorsports.  If he performs well at the outset, don’t be surprised if the series moves him up into the pro division.  Parker Chase moves into GTA in an Audi for TruSpeed Motorsports, while 2017 GT Cup champion Yuki Harata moves up to drive a Lamborghini Huracan GT3 for Dream Racing Motorsport.

As for GT Cup, there is nothing going on there.  Seriously.  No one has entered the class.  Car count in GT Cup has not been all that high since the class was introduced, but this will be the first time that no GT Cup teams have entered a race.

Things are looking much better in GTS.  2018 will be the first year that the class will be for GT4-spec cars only.  Teams have responded with a 28-car entry.

10 of the 28 will be pro entries, led by defending class champion Lawson Aschenbach in a Chevrolet Camaro GT4.R for Blackdog Speed Shop.  Team Panoz Racing’s Ian James was very strong last season and will likely be one of Aschenbach’s primary competitors.

There are a couple of new entries in the class as well.  74 Ranch Racing, which has competed in Trans-Am’s TA2 class in recent years, has two brand-new Mercedes-AMG GT4s for Shane Lewis and Gar Robinson.  Mühelner Motorsports America has moved their Porsche Cayman GT4 Clubsport MR to Pirelli World Challenge as well.  Gabriele Piana, who impressed in his IMSA Continental Tire SportsCar Challenge debut at Road America last August will drive.

The GTSA subclass has 18 entries and represents a good chunk of the growth.  Classic BMW, which competed in the TC class previously, has three BMW M4 GT4s entered by Toby Grahovec, Chris Ohmacht and Justin Raphael.  Grahovec was part of the team that charged to fourth overall in the CTSC BMW Endurance Challenge at Daytona in January.  Flying Lizard Motorsports switched from Porsche to Audi and will once again field two cars, this time for Adam Merzon and Mike Hedlund.

PF Racing, which ran part-time in 2017 with Ernie Francis Jr. and James Pesek sharing a car, has three Ford Mustang GT4s entered.  Jade Buford will drive in the pro class, while Pesek and Trans-Am veteran Vinnie Allegretta will drive in GTSA.  Finally, Team Panoz Racing is finally breaking out their second car that was supposed to debut last season.  Dr. Preston Calvert will drive the No. 51 Panoz Avezzano GT4.