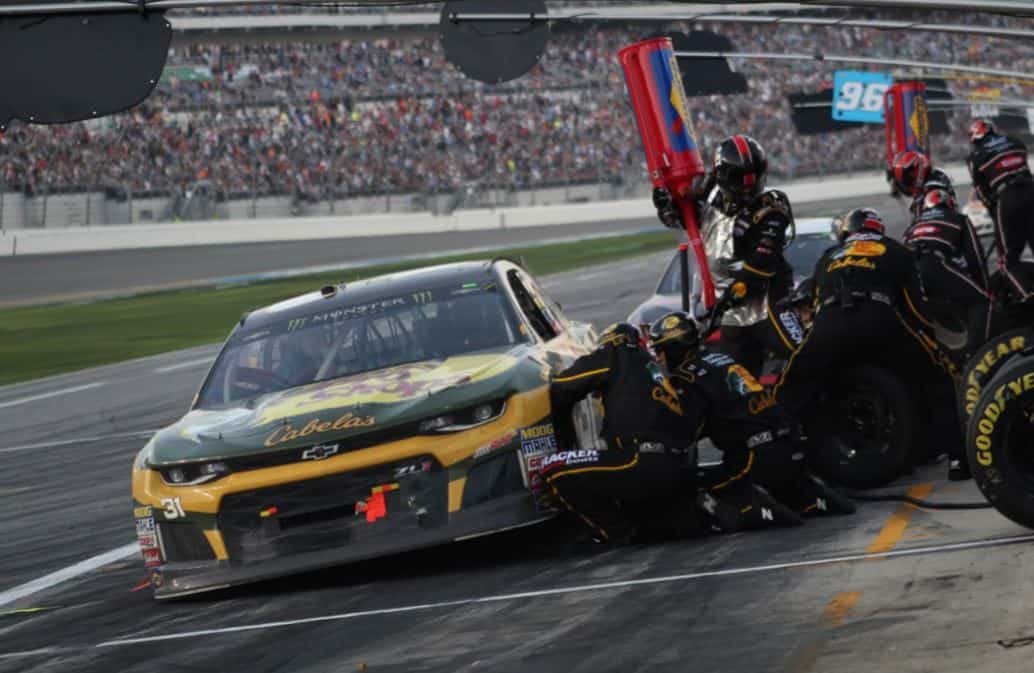 Just a reminder: we are three races into the 2018 NASCAR season. The way that teams are performing now might have little-to-no bearing on the rest of the year.  Recall Joe Gibbs Racing’s slow start to 2017 and the seemingly dire outlook of its drivers’ championship hopes.  By the playoffs, JGR and its associates at Furniture Row Racing had emerged as the championship favorites.

The 2018 season will have its own set of changes in store.  Before anyone declares Jimmie Johnson to be washed up, William Byron to be a bust, the new Chevrolet Camaro body to be a failure or Kevin Harvick to be a surefire lock for the championship race, they should remember that a lot can and will change over the next 33 races.  Concern about a driver’s performance should still be at a minimum.

However, there is one thing that both fans and NASCAR itself should be concerned about right now: the new NASCAR-mandated pit road airguns.

Traditionally, teams had built and developed their own air guns.  The differences between them were not always evident, but any instance in which teams could shave time off their pit stops was a potential advantage at the track.

On paper, it was not a bad idea.  If every team is using the same airgun in the pits, nobody can gain an advantage with that piece of equipment.  No disrespect is intended here to the over-the-wall crew members of NASCAR, who are among the finest and toughest athletes anywhere.  But less variance in pit stop times shifts a little more ability to the drivers in determining the outcome of the race, which is what most fans pay to see.

The problem is that the new pit guns have not been working properly.  While no major issues popped up during the Daytona 500, several teams encountered trouble at Atlanta Motor Speedway.  Among those teams was the No. 4 of Harvick, which lost the lead during a series of pit stops after the first stage.  Fortunately for Harvick, he was able to rally back to the front and win the race.  Yet several other competitors, particularly Martin Truex Jr. and the No. 78 team, expressed their dissatisfaction with the pit guns.

More problems arose at Las Vegas Motor Speedway.  Daniel Suarez was never able to recover from a slow pit stop early in the race caused by a pit gun malfunction.  Truex had issues for the second week in a row but rebounded to finish fourth.

Chances are the pit gun issues will get worked out too and these early-season problems will be long forgotten by November — unless, of course, problems with a pit gun cost someone a victory.  The No. 4 team was relatively lucky to have its gun break early in the race last week, and Harvick having the fastest car obviously helped him recover.  That said, it still took him some time to get back to the front.

What happens next week if there is a late-race gun failure at ISM Raceway?  Remember that the outcome of last year’s spring race in Phoenix hinged on a round of pit stops with less than 10 laps to go.  Suppose the race leader has a gun break on his final pit stop and gets shuffled outside the top 10 or loses precious seconds sitting in the pits under green flag conditions.  A gun failure might also result in a similar situation to what Kyle Busch experienced in the Atlanta Camping World Truck Series race last week.  Such a catastrophic failure would surely cost the team a chance at the win.

Having the new pit guns fail is not the same situation as if teams experienced an equipment failure last year.  If teams design equipment that breaks during a pit stop, the responsibility is on them.  Equipment performance is part of the team’s performance as a whole, even if those failures are out of the driver’s hands.

However, a failure of a pit gun provided by NASCAR is out of the driver’s and team’s control.  Nobody knows before a race which guns might be at risk of malfunctioning.  NASCAR is essentially playing a game of roulette with the race teams, a game that is unacceptable at this level of professional stock car racing.  If a broken gun keeps a team from winning, it could be the difference between that team reaching the playoffs or not.  Four years of the elimination-style postseason suggests that one win is enough to get a team into the playoffs.  But if a team misses out on a win because of a pit gun failure and gets shut out of the playoffs, NASCAR would be responsible.

Stewart-Haas Racing and the other Ford teams deserve the credit for getting off to a fast start, and they have the responsibility to keep their level of performance high.  Likewise, the burden is on Hendrick Motorsports to get its drivers back into winning shape.  No panic is needed now; each team will address its needs over the course of the season.

NASCAR, however, should be concerned about its pit guns.  It would be terrible for the sanctioning body to have to bear the responsibility of having its own equipment be the determining factor in a race or the championship battle.  To ensure that a situation like that does not happen, NASCAR cannot wait and see how the season develops like the teams can.  It must fix the problem now.

When isn’t the 78 team whining about something when they don’t like the toys in the sandbox????? To anybody, anywhere, anyhow that will listen. PPFFFTTTF!

To me the concern is spending millions of dollars on the guns. I don’t think every team has that luxury in their budget that they must get back from their sponsors or somewhere.

maybe he got them from ollie’s bargain outlet?!

Clearly, the pit gun company Paoli is not doing themselves any favors right now. Lots of negative publicity. They need to step it up and make sure these guns all function within 1% of each other and are 100% reliable. What seemed like a good idea to save serious money is turning into a sad joke.

It seems to me that the teams can’t practice with guns between races and they’re not used to the guns since they only get them at the track. The guns seem definitely slower than the guys are used to. It seemed to me that some of the tire changers were pulling the guns away before the wheel nut was off the stud and had to go back for it before the wheel would come off. That slows the time down.

Well apparently Brian didn’t think American made guns were good enough since the Paoli guns come from Italy. So much for NASCAR patriotism.

A few air guns fail (does the socket coming off of one count as a failure?) and its the end of the world. Remember that all these folks have an agenda. And to some of them saving money isn’t one of them.
But I guess if you can’t talk about the racing, which has apparently been incredibly boring, might as well have a crisis.