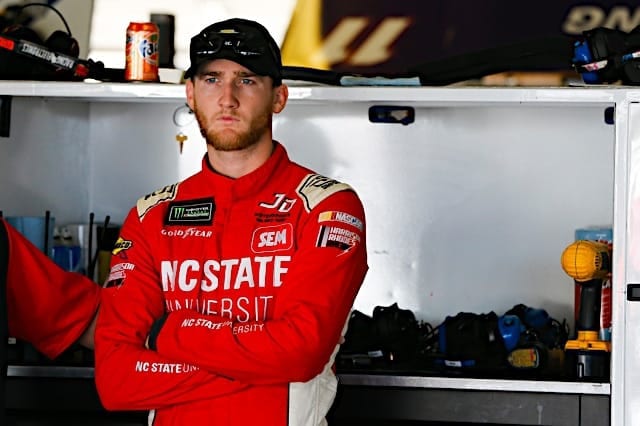 Rhodes, 24, keeps a high level of gratitude toward his long-awaited debut in the sport’s top series.

Speaking with Frontstretch Saturday afternoon at Atlanta, we spoke to the North Carolina native about his road to Cup, his biggest challenges to come and what else he has planned for 2018 in Cup.

Zach Catanzareti, Frontstretch.com: You’ve waited so long to be a Cup driver. What are the feelings right now?

Harrison Rhodes: I’ve talked to a couple different drivers, a few friends, and some of them are like, ‘Well, it’s easier to drive than an XFINITY car’ and some are like, ‘Eh, it’s harder.’ I didn’t know what to expect when I climbed in. I think I learned pretty quick. Still some adjustments to make that will make it better for the race. Overall, I’m pumped to be here.

Catanzareti: So, which one is tougher? XFINITY or Cup car?

Rhodes: I wouldn’t necessarily [say] one is tougher than the other. They’re different. These cars have a lot more horsepower, you have to manage the throttle a little better. So far, we’re not perfectly handling, so I’d say it’s tougher to handle. It’s just a different kind of feel overall. A lot of fun to drive.

Catanzareti: You’ve seen so many of these tracks, pretty much all of them. Would you say a tougher racetrack — old surface, bumpy, grimy — is a good place to test your ability for your first Cup race?

Rhodes: [Atlanta] is one of the toughest places we go to. The first couple laps you feel like Superman with all the grip in the world. Then, three laps later, you’re fighting it for all you got. In the Cup car, you feel that even more because you have that much more horsepower to burn the tires off quicker.

Catanzareti: How did this come together? It was a surprise to most seeing your name randomly pop up for Race No. 2. Was it a full offseason type of deal?

Rhodes: We talked to Rick there at the end of last year about doing some Cup stuff, maybe even making my debut last year. But I still had commitments with Johnny Davis as far as bringing monetary stuff there. It didn’t really fall into the plans there. For now, [Davis] is full over there and there was an opportunity over here. Rick needed an associate sponsor and I was able to get one. It came along quickly.

Catanzareti: Did you think this would never happen?

Rhodes: I thought it would happen eventually. We’ve had a rough road. I haven’t been in rides capable of winning. I’m really looking forward to making the most of what I got. Take care of the car and show what I can do.

Catanzareti: Having to wait as long as you had to — 84 XFINITY starts. Do you think that makes you appreciate it more than the kids who, perhaps, go through an XFINITY season and jump right to Cup? You waited years and years for this.

Rhodes: I think I appreciate driving in NASCAR more than most people in general. I went to NC State and got a degree there in business. I spent a lot of my time searching for the sponsors myself. No hard feelings to any of the guys in [Cup] or XFINITY, but a lot of these guys didn’t have to work as hard as I did to get here — whether it be family money or being in the sport already.

If I was in their position, I’d be happy to accept it as well. I very much appreciate where I’m at and how much effort it took to get here. My parents helped me an enormous amount, couldn’t be here with my dad’s support and my mom’s.

Catanzareti: One positive is that you come in with so much experience. You were with JD for a long time, multiple other teams. What do you feel you learned most that you can apply best to a Cup race?

Rhodes: I have experience at pretty much every track. That’s nice when you don’t have to go to a place for the first time. I’d say the biggest thing is experience at the tracks.

Catanzareti: As it stands right now, what are your plans for 2018?

Rhodes: Right now, this is a one-race deal. Hopefully, we can put together more deals, sponsorship depending. That’s the name of the game now, man, the sponsors and how much it costs to be here. Everyone has to work together. I’m sure Rick will do his part and I’ll do my part. Hopefully, we can come together to put more races on the schedule.

Catanzareti: For Cup, it’s a race-by-race type of deal. I don’t know how many times you’ve been in a position where it’s one race and that might be it. How is that settling in your head?

Rhodes: To be honest, this will be my sixth year racing. I’ve only had two years where I knew I was going to be driving the whole year, and I still didn’t get to drive every race those years. A couple guys came in with money and bought out the road courses. It’s really nothing different, to be honest with you. Every single time I’ve been at the track, I feel I have to go out there, do what I can, not make a fool of myself, get every single bit out of the car, market well. Every time feels like a test to me.

I’ve never really just sat down and been comfortable. Which I don’t think is a bad thing. You appreciate your opportunities even more, you make the most out of them. You go out and really try your best to perform every time.

Catanzareti: Are you just focused on getting with this No. 51 team here or are you perhaps looking at XFINITY and whatever comes up there?

Rhodes: I’m not closed off to anything. If somebody offers me an opportunity in XFINITY or a Truck, I’d love to explore that. For now, I love being here on the Cup side. I love Rick and his family; they’re great. As far as selling sponsorship, it’s a little easier here because people are more familiar with the Cup Series. Ultimately, I want to be here every week.

Catanzareti: We talked about expectations and plans. What are your realistic hopes for 2018? Obviously, you’d want to be full season, but looking realistically, what is on the table?

Rhodes: What I’m hoping to see is this opportunity going well and maybe a couple others here pretty soon. We’re always working to get partners on this car. Eventually, I’d like to see someone step up to the plate and sponsor us full-time and really see the value of this series and sponsoring a car. A realistic goal is to go out here and do well. Hopefully, in the next couple starts do the same thing and that would lead to a full-time position.

(Below is a video capture of our conversation with Harrison Rhodes.)