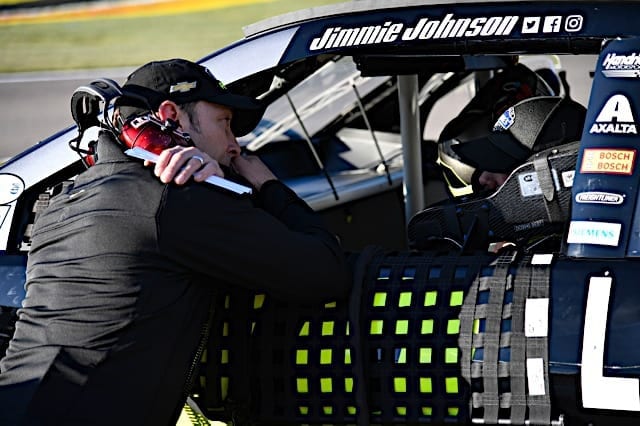 It’s been a hectic start to the NASCAR season for Hendrick Motorsports.

Overall, the four-car organization has only one top 10 through three races. That top 10 was recorded by Chase Elliott, who just snuck into the top portion of the Monster Energy NASCAR Cup Series field at Atlanta Motor Speedway, finishing 10th.

Other than Elliott’s top 10, the start to the NASCAR season has been a mess for Hendrick Motorsports. And the organization is not alone.

There’s no Jimmie Johnson. No Jamie McMurray. No JTG-Daugherty Racing cars, though, Chris Buescher is 16th in the standings.

Clearly, the new Camaro is behind, similar to the way last year’s Toyota Camry lacked speed over the first few months of the season. But that is still no excuse.

The Hendrick Motorsports squad is falling behind, and not just to the rest of the field. They are struggling compared to the other Chevrolet teams, and that in and of itself is a problem considering HMS has been the bow-tie’s most powerful force in NASCAR for several decades.

Q: Is there a realistic chance that Jimmie Johnson and Chad Knaus get split up before the first Pocono? – William S., Wisconsin

A: There comes a time when every driver-crew chief combination runs out of gas. It appears as if that time has come — or is about to come — for Johnson and his crew chief of 16 years.

If last year was any indication, Johnson and Knaus might be losing some of their magic. They’ve obviously had some rough patches over the years, but at 42 years old, Johnson is not getting any younger.

A crew chief change at this point in Johnson’s career may indeed prove to be ineffective. Think about it: He’s worked with only three crew chiefs over the course of his Cup career, with Knaus being on the pit box for the overwhelming majority of Johnson’s 582 Cup starts. There have only been 11 races in which Knaus wasn’t his crew chief, with Darian Grubb and Ron Malec taking over four races each in 2006 and 2007, along with Ken Howes’ three races working with Johnson in 2001.

How well would Johnson respond to a new crew chief? More importantly, who would fill such a role? The expectations and pressure would be incredibly high for someone to work with a seven-time champion.

But then again, such a change could rejuvenate Johnson after the worst year of his career. To say that three wins in a season is the worst in someone’s NASCAR career is quite astonishing, but that’s just how his time in NASCAR has been. The duo earned only four top fives and 11 top 10s to go along with the trio of triumphs, and that was certainly not enough to propel them to an eighth title together.

Fast forward to the start of this season and the No. 48 team has gotten off to yet another rocky start. But remember, this is not unfamiliar territory for them. The Lowe’s squad had rough starts to both the 2008 and 2009 seasons, and that didn’t stop them from competing for a title. In both of those seasons, Johnson earned two finishes of 24th or worse through the first three contests.

2018 is no different in that sense. But what is clear is that the Chevrolets just don’t have the speed they had back in 2008 and 2009. The Toyotas and Fords are awfully strong to start the year, and Knaus needs to be the leader for the bow-ties in order to get them back to the top.

Pulling Knaus would not be a wise decision. Sure, it’s been a tough way to start the year. Johnson has wrecked several cars already, but if Las Vegas Motor Speedway proved anything, it showed that a mediocre car will get them right near the top 10.

Unless Johnson and Knaus begin to fight on a weekly basis, I don’t see any changes being made to the No. 48 team before Pocono.

Q: Do you think Darin Grubb has training wheels on the No. 24 car to keep the “he hit everything but the pace car” crowd quiet? – Randy R., Asheboro, N.C.

A: This issue is not one with Darian Grubb. It’s a consequence of Hendrick Motorsports rushing a driver to the Cup Series before he is ready. Yes, that’s a hot take, but it’s something I firmly believe.

Look, William Byron is a championship-winning racecar driver. But here’s the deal: He’s never been in equipment that wasn’t out front before. Throughout his time in racing, he’s never been faced with the adversity of having a mediocre car that, even on a bad day, won’t get him a respectable finish.

But with a combination of HMS trying to play catch-up thanks to the Camaro body and a crew chief trying to shake off some rust, having a rookie driver certainly doesn’t make things easier.

Byron is doing a great job at keeping the No. 24 car clean. He’s doing what he needs to, and that’s making consistent gains throughout the weekends and not tearing up equipment.

He gets a solid A- for that considering he couldn’t totally avoid the chaos at Daytona International Speedway to start the year.

Grubb didn’t forget how to be a crew chief, either. He won a title with Tony Stewart just seven years ago and came pretty close with Denny Hamlin in 2012 and 2014. Oh, and not to mention, he nearly led Carl Edwards to a championship in 2015.

Byron is certainly being told to be consistent, rather than make the mistake that many other rookies make, and that is to overdrive the racecar. Is his team going to be satisfied with a finish of 18th at Atlanta or 27th at Las Vegas? No.

However, what they are going to be satisfied with is that he’s learning. He’s dealing with being stuck in the middle of the pack for the first time in his career. It’s an adversity he will get used to.

If he doesn’t, well, that’s a story for a different column.

Grubb is certainly doing all that he can. Remember, this isn’t the usual No. 24 team we’ve seen over the years. That’s now Elliott’s No. 9 machine. Instead, the No. 24 team consists of the old No. 5 crew. Yeah, the one that has struggled with the exception of Kyle Busch and Mark Martin, who each over-performed after Terry Labonte’s final few years in the No. 5 ride.

When Grubb took over the reigns on the No. 5 team for the final nine races of 2017, he improved Kasey Kahne’s average finish to 17.77, which was a slight increase from his season-end result of 19.4.

If Byron can get to that point by the end of the year, it will be considered a solid year. But with too high of outside expectations, he is going to receive some criticism.

For Grubb, a crew chief who has never worked with a rookie in the Cup Series, he is certainly being cautious in his approach. Fortunately for him, it should work. But it is going to take some time as HMS and all of Chevrolet works to optimize the performance of the new Camaro.

Maybe the engineers out to design faster cars. Problem solved.