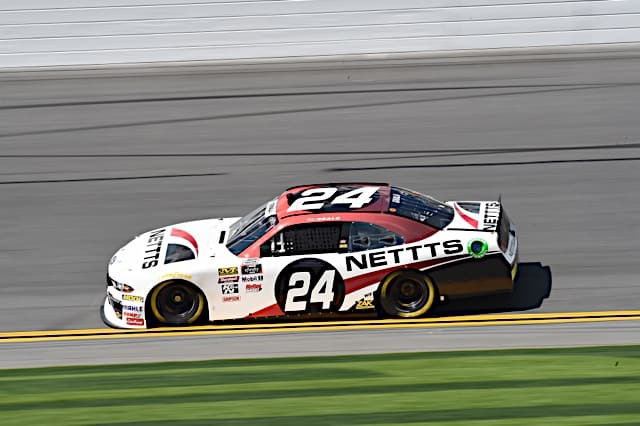 Go back two years and many NASCAR fans wouldn’t know the name Kaz Grala. Yet in 2018, he’s racing full-time in the XFINITY Series with JGL Racing.

Grala, 19, has sped through the ranks of NASCAR, seen by finishing seventh in the Camping World Truck Series point standings in 2017. His season-opening victory at Daytona International Speedway last year propelled the Massachusetts native into the spotlight, making a stop in the XFINITY Series after just one season in trucks.

He believes the early Truck Series victory is what helped the most in putting his name on the map, though, he admits JGL Racing team owner James Whitener didn’t approach him until around October for the opportunity to move to the XFINITY Series this year.

“Our team owner here, James Whitener, is a huge plate track fan,” Grala said. “I guess I caught his eye last year when I won the plate race here [Daytona]. That got him really excited and he said he does this fun because he has a business where he’s able to make a living, and so this is fun on the weekend.

“He likes to have a driver that he can get behind and get excited about and he said he was all excited after that truck race last year. He said ‘I want to put him in the car and go have some fun every weekend.’ I’m really grateful for him giving me the opportunity to be in this car.”

Through Grala’s first three XFINITY Series races, he scored a season-best of fourth at Daytona, missing the late-race melee. Then, he followed that with a bit of bad luck late in the going at Atlanta Motor Speedway, coming home in 23rd. Most recently, in the first stint of a three-race west coast tour, he finished 16th at Las Vegas Motor Speedway after running just outside the top 10 for much of the afternoon.

This year is a new beginning for JGL Racing, with the organization transitioning from Toyota to Ford. Running under the Ford banner, it has also picked up a technical alliance with Roush Fenway Racing, which Grala believes could be extremely beneficial for the small team.

Over the years, Grala has competed against Chase Briscoe and Austin Cindric in the Truck Series, while battling Ty Majeski in Late Models, each of whom will be piloting RFR’s No. 60 car throughout the year. However, he had never competed against sixth-year Roush XFINITY driver Ryan Reed until Daytona.

“It’s huge,” Grala said of the importance of having the alliance. “We’re working very closely with them and I think that’s important because JGL is not a Cup-affiliated team, and we’re trying to compete with Cup-affiliated teams, so it’s been really good so far because they’ve got a lot of notes about this and from their Cup cars.”

Grala admitted to Frontstretch that he would have enjoyed racing another season in the Truck Series, but he didn’t have sponsorship to continue with GMS Racing. It was either move to XFINITY or sit out in 2018.

“I’m going to have to rise to the occasion and learn a new car a little bit, but I am happy that I did my season in the trucks because you see some guys who skip over truck and go to XFINITY, and I think there is a lot to be learned in the trucks as far as learning all the trucks.”

In 23 Truck Series events last season, Grala had the victory at Daytona, five top-five finishes and 11 top 10s. He thinks that though he got the opportunity to move up at a young age, he is prepared as much as he can be heading to a new series.

“I think that any driver would like to move up a step and I feel like toward the end of the truck season last year I got comfortable enough to where a bad day was like fifth or sixth, where as early on a bad day was like 12th-15th,” he said. “I felt like I gained a lot throughout the series and that’s prepared me decently well for this year.”

The XFINITY Series is 10 races longer than the Truck Series schedule, so Grala believes it will take at least the first third of the season to get used to the new racecar, so he’s prepared come the postseason.

“I look at how much prepared I will be in this vehicle come playoff time,” he said. “I feel like I will have a lot of experience already and be ready to get after it once the playoffs come. I think it will be good for me as a rookie to have that many races.”

Through three races Grala sits 11th in the championship standings, six markers ahead of the playoff bubble.